In December 2015, world delegates will descend on Paris to ensure that global warming will not cross the guardrail of 2°C above pre-industrial levels.

In a way, we have already crossed this guardrail. NOAA data show that the year-to-date land surface temperature was 1.47°C above the 20th century average on the Northern Hemisphere in 2015, as illustrated by the image on the right.

Granted, there was less warming on the Southern Hemisphere, so the globally-averaged land surface temperature was a little bit lower, i.e. 1.34°C above the 20th century average. For reference, the image below on the right gives an overview of mean 1901-2000 temperatures. Anyway, the difference between hemispheres is small and not very relevant since most people live on the Northern Hemisphere.

Furthermore, between 1750 and 1880 the global average temperature had already increased by some 0.20°C.

Sure, 2015 is an El Niño year, but this El Niño is still strengthening, so 2016 could well be even warmer. Moreover, recent temperatures are in line with expectations of a polynomial trendline that is based on these NOAA data and that points at yet another degree Celsius rise by 2030, on top of the current level, as illustrated by the top image. Altogether, this would make it 3.27°C warmer than in 1750 for most people on Earth by the year 2030. 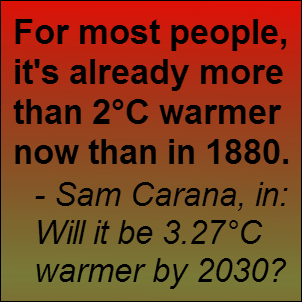 So, instead of acting as if dangerous global warming could possibly eventuate beyond the year 2100, delegates in Paris should commit to lowering temperatures, starting now.

To lower temperatures, cutting emissions alone will not be enough.

Stopping all emissions by people would make that the aerosols that are currently sent up in the air by burning fuel and that are currently masking the full impact of global warming, will fall out of the air in a matter of weeks. Until now, about half of the global temperature rise is suppressed by such aerosols. Stopping aerosols release overnight could make temperatures rise abruptly by 1.20°C in a matter of weeks.

Furthermore, carbon dioxide that is emitted now will take ten years to reach its peak impact, so we're still awaiting the full wrath of carbon dioxide emitted over the past decade.

A recent study calculates that global mean surface temperature may increase by 0.50°C after carbon emissions are stopped, and they will decrease only minimally from that level for the next 10,000 years.

Removing carbon dioxide from the atmosphere would not work fast enough to avoid further warming and acidification of the oceans. In fact, temperatures look set to rise even faster as feedbacks start to kick in more fully, such as albedo changes due to decline of the snow and ice cover in the Arctic and methane releases from the Arctic Ocean seafloor. Furthermore, water vapor will increase by 7% for every 1°C warming. Water vapor is one of the strongest greenhouse gases, so increasing water vapor will further contribute to a non-linear temperature rise.

In conclusion, the world needs to commit to comprehensive and effective action that includes both emission cuts and removal of greenhouse gases from the atmosphere and oceans, as well as further action to deal with the dire situation in the Arctic, as discussed at the Arctic-news Blog.

In December 2015, world delegates will descend on Paris to ensure that global warming will not cross the guardrail of 2°...
Posted by Sam Carana on Thursday, September 10, 2015