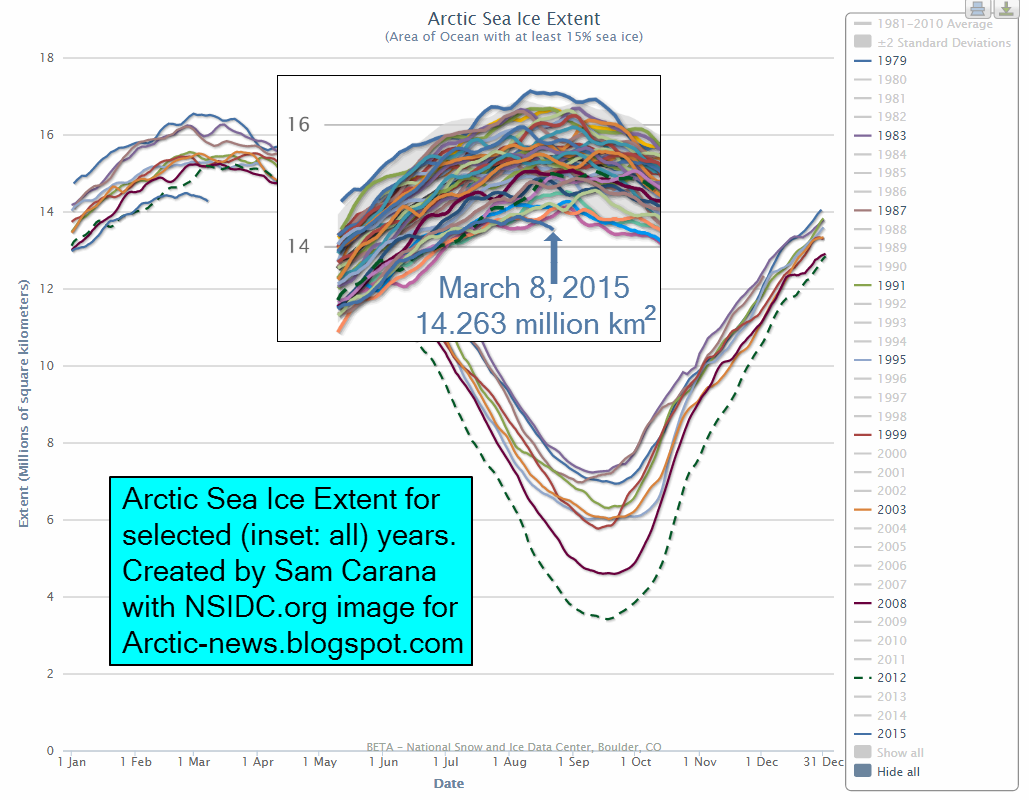 What would happen if the Arctic sea ice kept falling to, say, under 11 million square km by end April and then followed a trajectory similar to 2012 for the next four months? As the animation below shows, such a scenario could wipe out all Arctic sea ice for more than a month from September 1st, 2015.

The following image is a contribution by Albert Kallio.

Albert Kallio comments: "The latest sea ice thickness measurement (9th March 2015) for the US Navy submarines shows that the thick and rigid multiyear sea ice congestion has cleared from the Fram Strait between Greenland and the Svalbard Archipelago. That means sea ice is weak; new ice with saline residues and pack ice is made of numerous thin sea ice slabs that have been compressed to thick piles, rather than fewer thick slabs of multiyear sea ice. That means: more sea ice surface area is exposed to sea water and the heat within it. As a result, sea ice is likely melt even faster once it escapes from the Fram Strait. The wave penetration is also stronger within soft and highly fragmented seasonal ice packs. So, the sea ice is now primed for faster transport out of the Arctic Ocean."

So, what would happen if the sea ice was wiped out like that?

Sunlight that previously went into melting the sea ice, as well as sunlight that was previously reflected back into space by sea ice, would be absorbed by the Arctic Ocean instead. In other words, we can expect massive warming. In an earlier post, Prof. Peter Wadhams warned that warming due to Arctic snow and ice loss may well exceed 2 W per square m, i.e. it could more than double the net warming causing by all emissions by all people of the world.

The resulting temperature rise is likely to start wildfires all over the Northern Hemisphere, which would not only send huge amounts of greenhouse gases and soot into the air, but could also threaten entire cities and cause much of the grid to stop functioning. In 2007, a main power line burnt in Australia causing power outages for many homes and traffic lights in Melbourne. Many power plants require extensive water cooling, which can come under threat during intense heatwaves, as happened in France in 2009. Such events may be dwarfed by future heatwaves. Fuel is often transported by rail to power plants, and the railway tracks could bend during heatwaves. The health threat posed by heatwaves, wildfires and soot may result in critical employee loss at power plants.

As a result, electricity supply could stutter, and much industrial activity may stop, while there may be lots of traffic problems, etc. This is only one of the problems, though, as discussed in the 2007 post Ten Dangers of Global Warming. Food supply will come under threat due to crop loss and reduced supply of food to shops, made worse by traffic problems. As discussed back in 2011, much of the soot from firestorms in Siberia could settle on the ice in the Himalaya Tibetan plateau, melting the glaciers there and causing short-term flooding followed by rapid decrease of the flow of ten of Asia’s largest river systems that originate there, with more than a billion people’s livelihoods depending on the continued flow of this water.

Less industrial activity will not cause an immediate fall of tenmperatures, though. Instead, it would make that the aerosols that are currently sent up in the air by such activities and that are currently masking the full wrath of global warming, will fall out of the air in a matter of weeks. Until now, about half of the global temperature rise is suppressed by such aerosols. Stopping aerosols release overnight could make temperatures rise abruptly by 1.2°C (2.16°F) in a matter of weeks. 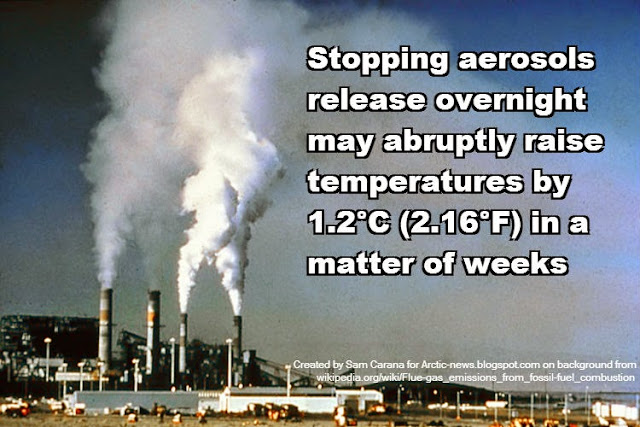 Methane eruptions from the seafloor of the Arctic Ocean typically start becoming huge around the end of October.

The combined impact of such feedbacks could wipe out crops, deplete water supplies and make a huge number of species go extinct very quickly, including human beings. 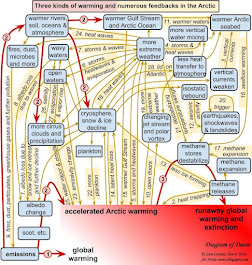