Across the oceans, the August 2015 globally-averaged sea surface temperature was 0.78°C (1.40°F) above the 20th century average—the highest temperature for any month in the 1880–2015 record. NOAA analysis further shows that in August 2015, the sea surface on the Northern Hemisphere was 1.02°C (1.84°F) warmer than it was in the 20th century, as illustrated by the graph below. 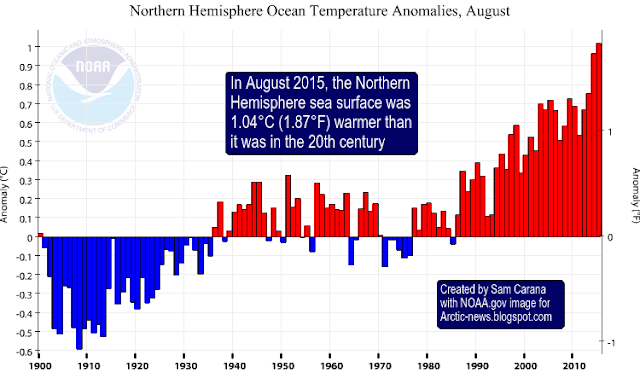 Such a temperature rise would be catastrophic, as there are huge amounts of methane contained in the form of hydrates and free gas in sediments under the Arctic Ocean seafloor. A relatively small temperature rise of part of these sediments could cause a huge abrupt methane eruption, further speeding up local warming and triggering further methane eruptions, in a spiral of runaway warming that will cause mass destruction and extinction, as described in the reference page The Mechanism.

The situation is dire and calls for comprehensive and effective action, as discussed at the Climate Plan page.


August data for sea surface temperature anomalies on the Northern Hemisphere contain a trendline pointing at a rise of 2...