Obama's Power Plant Rules: Too Little, Too Late, Too Ineffective

On June 2, 2014, the Obama administration through the Environmental Protection Agency (EPA) announced that states must lower carbon dioxide (CO2) emitted for each unit (MWh) of electricity they produce.

Under the EPA rules, the nationwide goal is to reduce CO2 emissions from the power sector by 30% from 2005 levels. This will also reduce other pollutants.

Under the EPA rules, states must meet interim targets during the 2020s, but they can delay making emission cuts provided they will on average comply with targets by 2030. Moreover, the EPA suggests that they can from then on maintain that level subsequently. 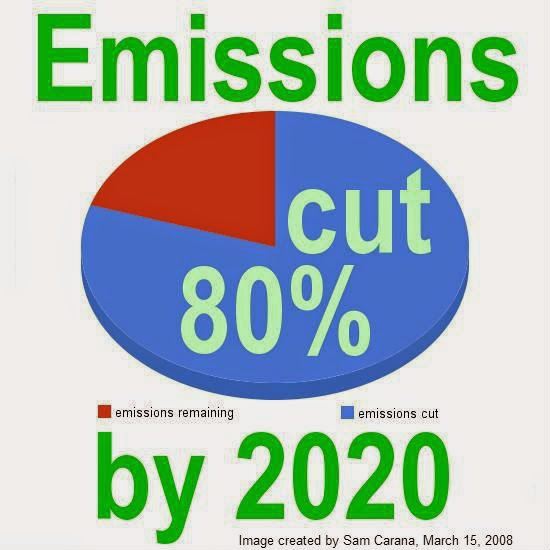 Sam Carana: For over six years, I have been calling for an 80% cut in emissions by 2020. When people now ask if I still believe such reductions are feasible given the lack of action over the years, I respond that, precisely because so little has been achieved over the years, it now is even more imperative to set a target of 80% emissions cuts by 2020. If we start cutting 13.4% off this year's emissions, and keep cutting emissions by the same amount each subsequent year, we'll be under 20% (i.e. at 19.6%) by 2020.

Under the EPA rules, states could comply by either reducing CO2 emissions from their power plants or buying credits or offsets from elsewehere, e.g. through cap-and-trade programs. States can choose to use existing multi-state programs or create new ones.


Sam Carana: The goal should be a genuine 80% cut in emissions in each and every state. It is good to delegate decisions to states regarding what works best locally to achieve such reductions. However, schemes such as cap-and-trade, carbon credits and offsetting keep local polluters dirty by allowing them to claim credit for progress made elsewhere. A state buying credits from beyond its borders does not genuinely reduce its own emissions, making it even harder for it to reach its next targets (which should be even tighter), while also making it harder for targets to be reached elsewhere.

The bigger such schemes grow, the more they become fraught with difficulties, twisted with irregularities and riddled with political chicanery, making them prone to fraud and bribery, often beyond the administrative scope and legal reach of local regulators.

Such schemes are inherently counter-productive in that they seek to create ever more demand for polluting activities; they will continue doing dirty business until the last possible 'credit' has been sold, burning the last bit of fossil fuel from irrealistic carbon budgets that are fabricated inside the dark politics of compromise, campaign-funding and complacency.

Such schemes are designed to profit from keeping the dirtiest power plants going and prolonging their lifetime beyond any reasonable purpose, in efforts to perpetuate the scheme itself and extract further money that, instead of being used to benefit the cleaner solutions, is then often used to finance further pollution elsewhere and spread the reach of such schemes. Such dreadful conduct is typically hidden away in a web of deceit custom-made to avoid the scrutiny of public accountibility.

And what if states fail to reach targets? The EPA suggestion to use such schemes effectively delays much local action, while encouraging states to negotiate with each other. This opens up the prospect of states blaming each other and taking legal action rather than genuine action. If the trappings of such schemes make states fail to reach targets, penalties could be imposed, but that still does not guarantee that targets will be reached; furthermore, given the complexities of such schemes, policing them poses additional burdens on administrators, police, courts and lawyers. Huge amounts of money and time have already been spent on court cases to postpone action, rather than on building genuine solutions.

The best way to cater for non-compliance is to prepare federally-administered fees, to be levied on sales of polluting products, and with the revenues used to fund federal projects that do reduce emissions. As said, it's good for the EPA to encourage states to each work out how best to reduce their respective emissions, provided that each state does indeed reach set targets. Where a state fails to take the necessary action, the EPA should resume control and call for federal fees to be imposed in the respective state.

The Clean Air Act calls for the 'best system of emissions reduction' to reduce emissions from power plants. The best system is one that levies fees on pollution and then uses the revenues to fund rebates on the cleaner products sold locally.

Such combinations of fees and rebates (feebates) are the most effective way to make our economy sustainable, as part of the comprehensive action that is needed to avoid climate catastrophe. For more details on comprehensive and effective action, see the ClimatePlan blog.