A major earthquake hit the Aleutian Islands, Alaska, on June 23, 2014.

The U.S. Geological Survey (USGS) earlier listed the earthquake at a magnitude of 8 on the Richter scale, but eventually gave the quake a magnitude of 7.9.

Initial tsunami warnings, as reflected by the two NOAA images on the right, were later cancelled, e.g. the Pacific Tsunami Warning Center in Hawaii said the earthquake’s epicenter was too deep to pose a tsunami threat to its coasts.

Indeed, earthquakes that occur at less depth, i.e. closer to the seafloor, pose a greater tsunami threat, as more energy will enter the sea as kinetic energy pushing up wave height propelled in the form of a tsunami.

Earthquakes that occur at greater depth pose other kinds of threats. When earthquakes hit deep under the sea floor, more energy will translate into shockwaves that can propagate over great distances through the Earth crust, particularly along fault lines.

In this case, the situation is particularly threatening for the Arctic Ocean. As the map below shows, the fault line where this earthquake hit extends through Siberia into the Laptev Sea and was hit by three earthquakes recently: 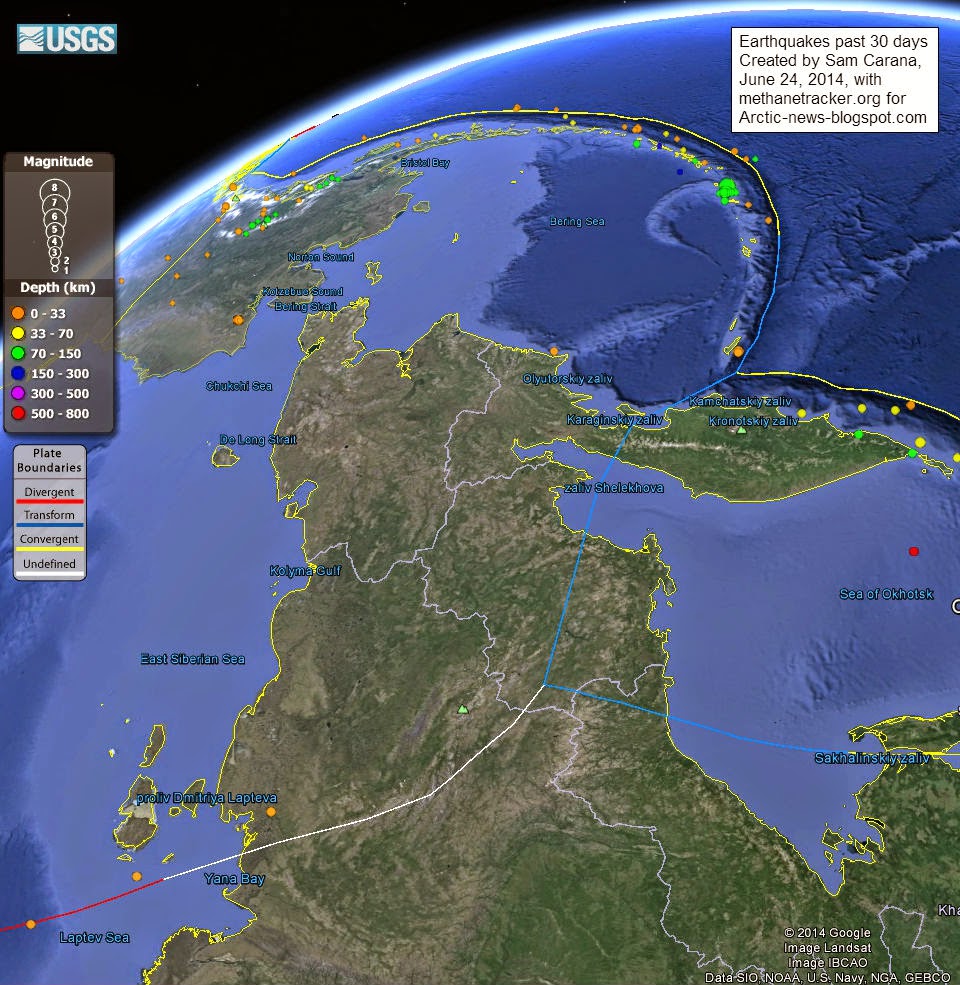 Earthquakes are a major threat for the Arctyic as they can destabilize methane hydrates contained in sediments under the seafloor of the Arctic Ocean.

The situation is the more dangerous given the warm sea water that threatens to enter the Arctic Ocean, as illustrated by the image below. 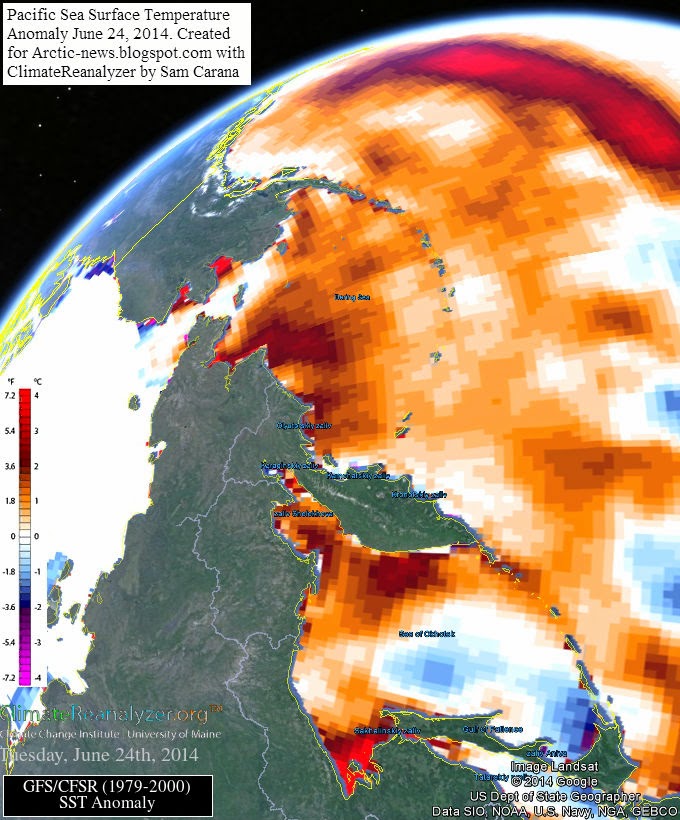 Meanwhile, the situation hasn't improved, as illustrated by the image below. 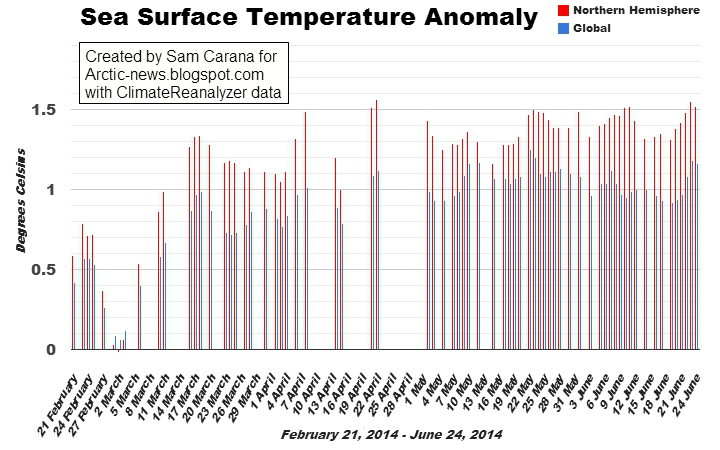 The NOAA image below shows sea surface temperature anomalies in the Arctic Ocean on June 23, 2014, with many areas showing anomalies above 8 degrees Celsius. 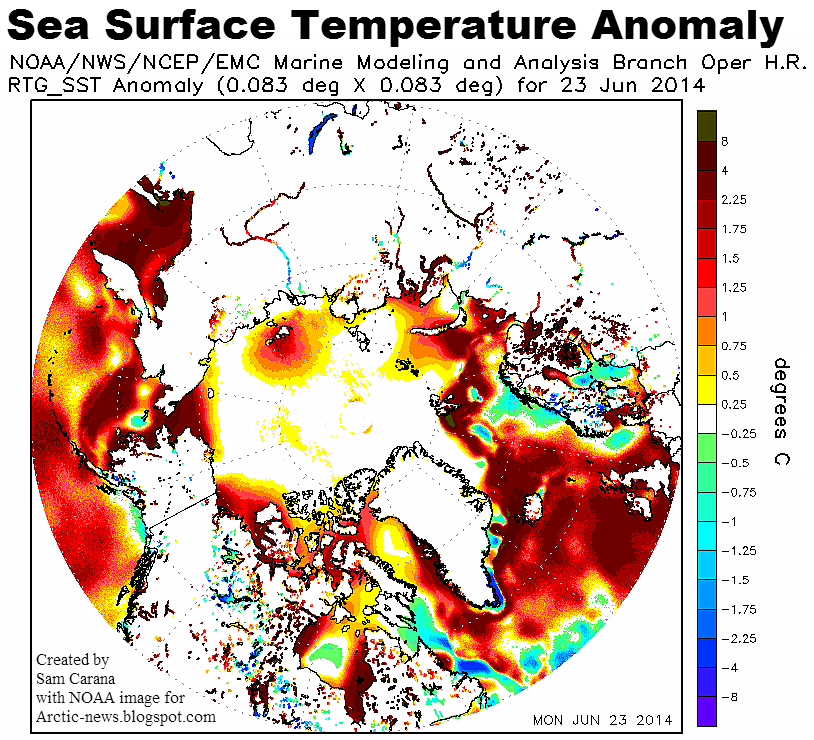 According to NOAA's Climate Prediction Center, there is about a 70% chance that El Niño conditions will develop during the Northern Hemisphere summer 2014 and an 80% chance it will develop a few months later.

As discussed in earlier posts, the sea ice is already very thin, and while ocean heat is melting the sea ice from beneath, the sun is warming up the ice from above. At this time of year, insolation in the Arctic is at its highest, as Earth reaches its maximum axial tilt toward the sun of 23° 26'. In fact, insolation during the months June and July is higher in the Arctic than anywhere else on Earth, as discussed at this earlier post.

In conclusion, the situation is the Arctic is threatening to escalate into runaway warming and urgently requires comprehensive and effective action as discussed at the Climate Plan blog.