Our New Climate and Weather - part 2 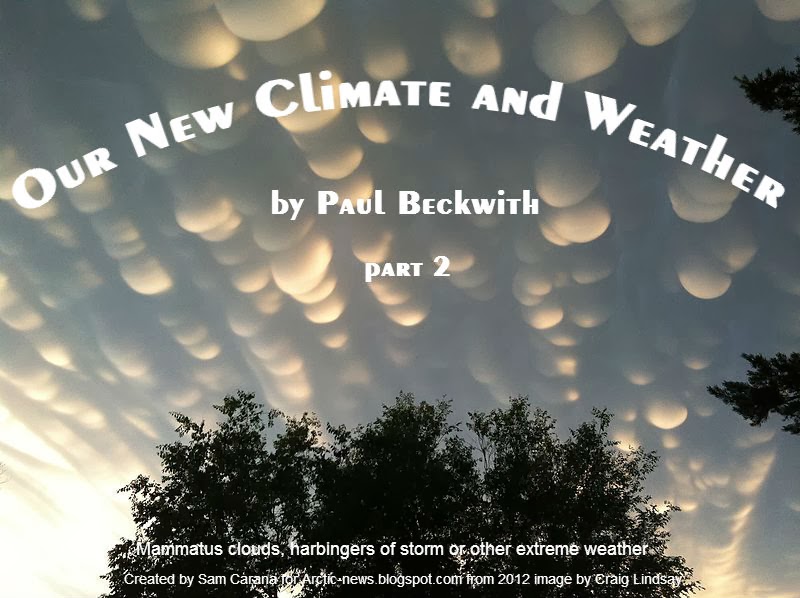 In North America we are about to experience a late January, 2014 weather event that will likely go down in the record books, at least for a few weeks until the next event. Such is life on our rapidly changing planet in Climate 2.0, or perhaps this would better be called the great abrupt climate change transition between Climate 1.0 (our old climate) and the new, much warmer Climate 2.0.

In any event, the jet stream is configuring into that two crest/two trough mode that I discussed above. An enormous plug of cold Arctic air is descending southward across North America with temperature anomalies 20 degrees C below normal (36 degrees F below normal). It likely reaches far enough south to enter into northern Mexico and to cover large parts of Florida and extend out into the Gulf of Mexico and the Atlantic, resulting in northern Florida dropping below freezing (see my YouTube video below).


For more commentary on above video, see the post Deep Freeze and Abrupt Climate Change
Meanwhile, in turn, almost the entire Arctic region is seeing huge positive temperature anomalies that are 20 degrees C above normal (36 degrees F above normal). This air is changing the Arctic circulation patterns, and although the Arctic air temperature is still below zero, it is so much warmer than normal that the thickening and area growth of sea ice is being severely curtailed. There is strong ice motion out of the Fram Strait between Greenland and Svalbard which is carrying some of the thickest ridged ice just north of the Canadian archipelago out to warmer water and destruction. In the Bering Strait the ice motion is switching between transport of warm Pacific Ocean water into the Arctic Ocean and export of cold Arctic Ocean water out into the Pacific, leading to less ice formation outside the strait. 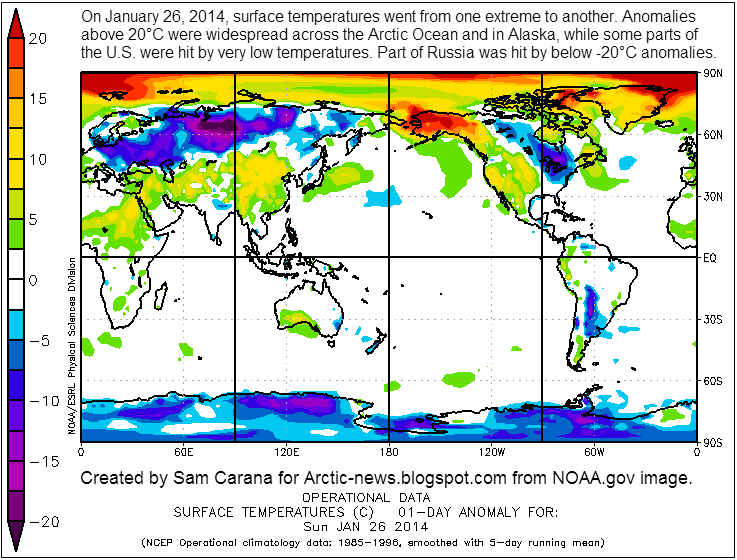 The easternmost and westernmost edges of North America are outside the jet stream trough, and being in the ridge on either side of the trough are experiencing record warm temperatures. Snow is minimal there, and lakes that would normally have frozen long ago are open water. Further south on the west coast, California is undergoing a record drought and the Sierra Nevada snow pack which feeds the rivers and reservoirs in the state is only at 15 to 20% of normal levels. And this is the normal rainy season for California, which is the breadbasket of the nation. If this drought continues, as it has for almost 3 years, it is very likely that food prices will increase substantially across North America.

Putting on my Engineering hat, it is very clear to me that the large temperature swings over short periods of time that occur as the jet stream troughs and ridges sweep past a fixed region such as a city are wreaking havoc on infrastructure. We have commonly been getting temperature swings of 40 degrees Celsius (72 degrees F) within a day or two. These swings usually cross zero, and result in torrential rain events followed by flash freezing and then large amounts of snow, or the inverse process occurs, often in a cycle over a week. Clearly buildings, roads, railroad tracks, and pipelines are under siege from these temperature swings, precipitation changes and repeated freeze/thaw cycles.

Consider a railroad track. The rails are basically two ribbons of steel of length L separated by width w that are held in place by spikes onto wooden railroad ties. Each section L is joined to adjacent sections with spacers. The tracks are designed for a nominal temperature range. At the high end temperature, the steel expands to its maximum length, and adjacent sections butt together at the join. At the low end temperature, the steel contracts and the gap between adjacent rails is at a maximum. As the daily temperature varies between the lows and highs, the rail expands and contracts. Similarly, for seasonal changes. All within design tolerances. What we are seeing now is a higher frequency of extreme temperature swings of 40 degrees C or larger (72 degrees F), which is greatly stressing the rail infrastructure. These large swings are stretching the limits of the design tolerances since they exceed the usual daily temperature ranges, and occur way faster than any seasonal change. In combination with the explosion of rail traffic from oil trains, the risk of derailment accidents has greatly increased, and we are seeing an enormous increase in derailments. We have also seen a large increase in the frequency, amplitude, duration, and spatial area of torrential rainfall events which have led to floods and extreme river flow rates which undercuts bridges and also leads to more rail derailments. Especially when the rail is submerged for extended periods of time, as occurred, for example in Colorado in late summer 2013.

Ditto with pipelines. Pipeline sections are attached to each other via welds or sleeves and during extreme temperature swings the expansion and contraction of concern is in the longitudinal direction of the pipe. The pipelines are usually buried a few meters under the ground, which can reduce the temperature variation during the atmospheric temperature swings, however where they cross rivers and streams they are exposed to the changing elements and river flows. They are also susceptible to flash freeze events in which large sections of the ground contract and lead to cracking and soil displacement. Water saturation levels in the soils has a large effect on pipeline stresses, and can undergo rapid changes from rapidly changing precipitation cycles.

We are all familiar with how roads fare under extensive freeze/thaw cycles. Even worse, the ice melting salt corrodes guardrails, signs, and posts and as cracks open up in the asphalt salty water percolates in and the freeze thaw cycles widen the cracks leading to potholes and road breakup. And that is in northern latitude regions that have a regular snow in winter climate. In more southern regions that are unaccustomed to snow, there is widespread use of concrete for road surfaces. When there are large temperature swings the concrete is more prone to cracking and it is more difficult to remove snow and ice from these roads, since there is a lack of snow removal equipment and salt in these regions, and the concrete is lighter in color and thus absorbs less solar energy than asphalt and thus stays colder.

The biggest problem that homeowners face in more southern latitudes from these deep freeze situations, apart from personal discomfort in poorly insulated homes, is water pipe freezing and rupturing. Leaving the water taps all partially open to ensure a trickle of water flow through the pipes alleviates a lot of this problem.

In summary, climate change caused extreme weather events are severely stressing infrastructure like roads, bridges, rail, pipelines, and buildings. Much of this infrastructure was built many years ago and upgrading and maintenance has been neglected due to postponed and reduced budgets; while traffic on rail, for example has exploded in volume and weight. We are now facing the consequences of accelerated climate change and the years of neglect of our aging infrastructure.

In the video below, Paul says more about the damage to railway tracks and pipelines.

In the video below, Paul Beckwith explains how declining Arctic sea ice is causing Australia to bake and Antarctic sea ice to grow.