The image below shows a lot of methane over deeper parts of oceans, in particular the Arctic Ocean.

Let's zoom in and take a closer look at what's happening.

The presence of methane over the deeper parts of the Arctic Ocean has been discussed in a number of post at this blog recently (see under related, below). It should serve as a warning to those who believed that all methane escaping from deep-sea hydrates would be oxidized in the water by microbes before entering the atmosphere.

The IPCC appears to still close its eyes for such scenarios. Look at this screenshot from IPCC AR5 WGI TS.3.7:

Low release this century? Well, the danger may seem low now in many places, but the situation is already very dangerous in the Arctic, where hydroxyl levels in the atmosphere are very low, where water temperatures can show huge anomalies and where seas can be very shallow and at times become super-saturated with methane, to the extent that oxygen depletion in the water prevents methane oxidation. In the case of large abrupt release, waters will soon become super-saturated with methane locally, especially in the shallow parts of the Arctic Ocean. Furthermore, low sea temperatures and the peculiarities of currents create conditions in the Arctic Ocean that are not beneficial to the kind of growth of microbes that would decompose methane in oceans elsewhere.

How much methane are we talking about? One look at the top image shows that there's a huge amount of methane over the Arctic Ocean. On October 3, 2013, a peak reading was recorded of 2283 ppb and that wasn't even the highest recent reading, as illustrated by the graph below. 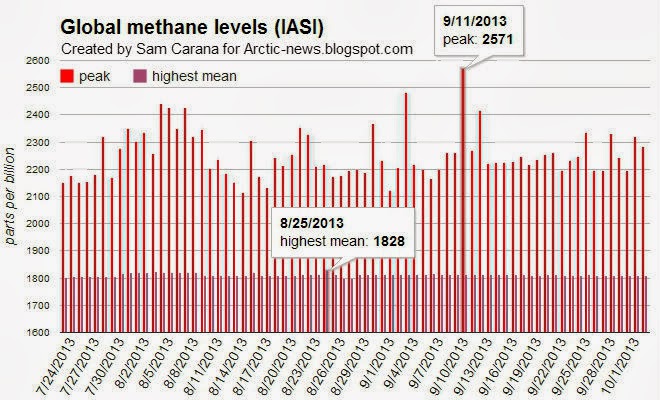 Where were these large amounts of methane released? The animation below shows methane methane readings of over 1950 ppb on October 3, 2013, on the afternoon only and with readings at only four relatively low altitudes, with methane over the Arctic Ocean dominating the picture.

As the animation further shows, methane seems to perforate ice that currently has the highest concentration levels. Or, the methane could have been bubbling up along the edges of the sea ice. Anyway, methane over deep waters is a worrying development, as it could indicate hydrate destabilization that could become worse.

Does the IPCC point out such dangers? In TS.4.5, the IPCC seems to reach the opposite conclusion, adding that it does so with high confidence:

This is not a trivial matter. A study by Gail Whiteman, Chris Hope and Peter Wadhams, recently published in Nature, concludes that a 50Gt methane release in the Arctic would cause $60 trillion in damages. By comparison, the size of the world economy in 2012 was about $70 trillion. The study adds that such a methane pulse will "bring forward 15–35 years the average date at which the global mean temperature rise exceeds 2°C above pre-industrial levels".

Given that warnings such as addressed by such studies have been sounded for years, one would have expected the IPCC to have taken a very close look at such scenarios. So, what made the IPCC so confident that such catastrophic developments will not eventuate this century? Was there robust evidence behind such a conclusion? Or did the IPCC simply overlook concerns about methane release from the Arctic Ocean seabed? More about that in the next post.