Colorado flooding, what does the IPCC say?

Flooding in Colorado has caused at least five death. As of 14 September, more than 500 were unaccounted for. Nearly 19,000 homes are damaged or destroyed.

Just be glad that the oil pipeline was not something like Keystone XL or Line 9 or Line 6.

Wake up people. Isn't it ironic that extreme weather events are accelerating in frequency, magnitude, spatial extent, and duration and are due to the very abrupt climate change that is being rapidly worsened from fossil fuel emissions; from burning the very stuff that is carried by the oil pipeline infrastructure.

And politicians are either very stupid or simply slaves to the fossil fuel companies since they ignore all laws protecting the environment, and even rewrite the legal system to eliminate any laws that slow or prevent pipelines, tar sands, fracking and any other fossil fuel infrastructure from being built. While publishing outright lies slamming renewable energy.

No wonder police forces across the world are becoming branches of the military; they realize that the public will soon be furious at the politicians and corporations and government corruption at all levels.

Meanwhile, according to the dailymail leaked IPCC reports say that "Global warming is just HALF what we said". So, what's going on? For starters, it appears that the IPCC has been fooled into ignoring the dangerous situation in the Arctic, i.e. albedo changes, methane and further feedbacks. The cartoon below illustrates this, please comment and share widely! 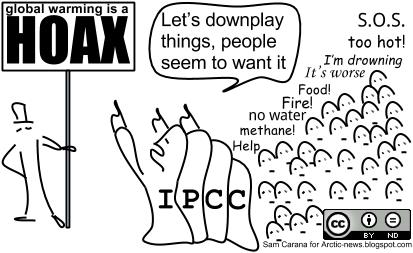