GROWTH RATE OF CARBON DIOXIDE IN THE ATMOSPHERE

The world is probably at the start of a runaway Greenhouse Event which will end most human life on Earth before 2040. This will occur because of a massive and rapid increase in the carbon dioxide concentration in the air which has just accelerated significantly. The increasing Greenhouse Gas concentration, the gases which cause Global Warming, will very soon cause a rapid warming of the global climate and a chaotic climate.

Immediately before the Industrial Revolution, in 1750, the concentration of carbon dioxide in the air which had been stable for millennia, the main Greenhouse gas, was 280 parts per million, but in 2013 it is likely to average 395 parts per million. It has been increasing at an increasing rate since 1750. 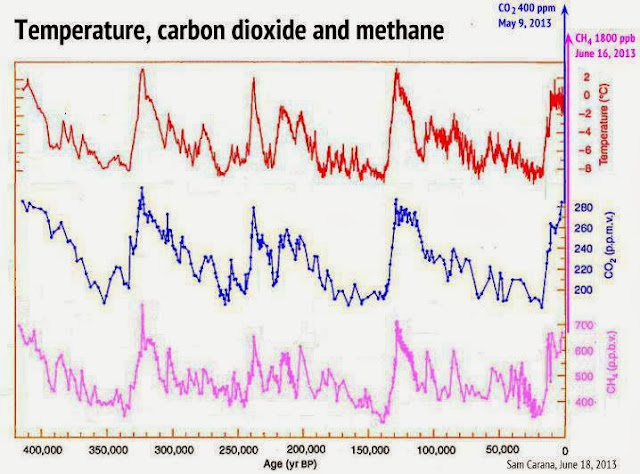 THIS HUGE INCREASE SHOULD BE PUBLISHED EVERYWHERE WORLDWIDE NOW

When there have been large anomalous increases in the past, though nothing like this, there has been a rapid return to near normal but this is probably slightly different. The most likely growth in the calendar year 2013 is likely to be about 2.85 parts per million, a calendar year record , but much below the growth from July 2012 until July 2013. The growth for 2012 and 2013 is likely to average out at about 2.62 parts per million, a record for a two year period.

Again, looking to the past, when there has been a rise in concentration like we will have had in 2012 and 2013 the rate of increase in concentration diminishes for a couple of years before rising again. I would expect the rise in concentration in 2014 and 2015 to average 2.55 parts per million before rising at an increasing rate thereafter assuming the world carries on with business as usual. Nevertheless this average rate is faster than we have yet witnessed except for the 2012 and 2013 period. This rate of increase is much faster than that which preceded the greatest ever wipe out of life on earth 249 million years ago.

There is a significant uncertainty about the above growth rate in the near term, with a chance of a higher and lower growth rate though the above forecast is the most likely outcome.

It is even more absolutely critical that carbon dioxide concentrations from August 2013 onwards are rising at a slower rate than between July 2012 and July 2013 otherwise the world will have entered a very fast runaway Greenhouse Event. Carbon Dioxide concentrations will almost certainly be rising at a slower rate from August 2013 onwards.

The runaway greenhouse event, or a very fast runaway Greenhouse Event is probably just starting, and can only be stopped by an immediate response. The danger is that it will very rapidly run out of our control. I think the net negative feedback to greenhouse gas emissions is just starting to diminish. It is not clear whether this is because the sinks are absorbing less carbon dioxide or a form of positive feedback is starting probably a bit of both.

The rising carbon dioxide levels will probably lead to rising global temperatures from about 2015 onwards which will cause more climatic disruption, especially severe droughts, and thus more carbon emissions almost certainly before 2020.

This is going to occur at a time when the Arctic Ocean will probably become free of sea ice leading to a different set of runaway events which will coalesce with the build-up of carbon dioxide in the atmosphere.

This will lead to societal collapse after rising global temperatures have caused severe droughts and a global famine at some time prior to 2040, but probably much sooner in about 2020 or in the 2020’s.

The absolute priority is that the world’s public and politicians are told about the rapidly increasing rate of carbon dioxide concentrations in the air which will cause a runaway Greenhouse Event, both in the media and in social media. The gravity of the situation needs to be accepted and all nations agree to co-operate to solve the problem.

There needs to be a world conference at which all nations agree the grave situation that the world is facing and that urgent and drastic action is essential. They need to accept and agree that all nations will cut greenhouse gas emissions to an accepted and equal low level of emissions per person. This will mean that only nations with very small emissions per person like the Central African Republic will not need to make any emission cuts. The rate of increase in Carbon Dioxide needs to be cut to 2 parts per million per annum by 2015 onwards. The arctic needs to be cooled so that the sea ice does not all melt before the end of the Arctic Summer.

Reducing the rate of carbon dioxide build-up in the atmosphere will be astoundingly difficult. Emissions must be cut drastically, but this will lead to a reduction of Sulphate aerosols in the atmosphere, which might cause temperatures to rise and more carbon to be emitted from biomass as droughts become more severe. The solution is to try the relatively easy route and then use geo-engineering as necessary. This involves huge societal changes, a more egalitarian society and a smaller global economy, but if it is not done almost everybody will die.

Secondly, a group of scientists needs to be formed under the authority of the United Nations to formulate geo-engineering technologies, to go together with cuts in emissions, to reduce the carbon dioxide content of the atmosphere, such as planting forests, and to cool the arctic to save the arctic sea ice.

The immediate priority is to accept the gravity of the situation and that all nations and peoples will co-operate to solve the problem.

These measures will give humanity a chance of saving civilization.