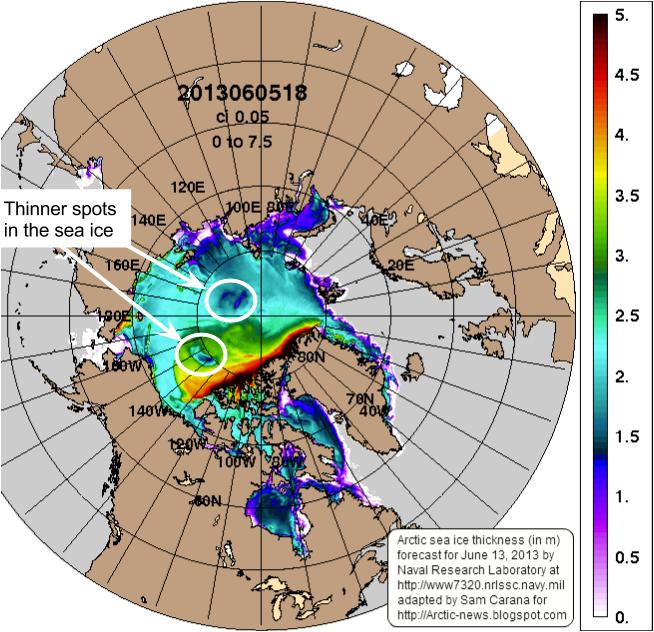 Below, a 30-day Naval Research Laboratory animation illustrating the development of the thinner spots.

For years, observation-based projections have been warning that Arctic sea ice will disappear within years, with dire consequences not only for the Arctic, but for the world at large. Hopefully, more people will realize the urgency of the situation and realize the need for a comprehensive and effective plan of action as described here.

Due to a constant thinning of the Arctic Ocean ice cover it has become sensitive to shearing by ocean wave penetration, winds and ocean currents. As a result of this weakening, a relatively small but persistent storm that centred over the North Pole managed to shatter 75%, or three quarters of Arctic Ocean's ice cover into free ice floes.

Because of the earth's spin, winds and ocean currents, the North Pole immediacy saw vast leads opening in colossal numbers, lots of broaken ice has migrated towards the Atlantic Ocean via the Fram Strait, the Barents and Kara Seas.

The situation is opposite on the Pacific Ocean end of the Arctic Ocean where ice cannot escape further south due to Eurasian and North American land barrier blocking further southward ice movements. These areas have seen densification of sea ice as the broken ice has packed against the Arctic Ocean’s perimeter coastlines.

The Arctic Ice Cover break up is a dangerous situation because the insolation (sunlight amount) and heat carryover from the continent (currently snow free) is the greatest on perimeter in far south (the Bering Strait).

(1.) The high Arctic Basin will face aggressive melting as sunlight pours into the open leads of dark water, leading to opening of this part of the ocean early.

(2.) The compaction zone in Alaska will later follow the suit as the ice gets pushed against the warm coastal seas.

(3.) Despite good (near 100%) ice cover, on the compaction zone, the ice will melt also here as the heat carry over from the continent (south) is here the greatest.

(4.) The sunlight amount and the length of the annual melt season are the greatest in the far perimeters of the Arctic Ocean (around the Bering Strait).

(5.) The brokenness of sea ice cover into countless ice floes increases its three dimensional surface area in water which helps the transmission of heat from the sea water into ice. Sea water retains large thermal inertia (capacity to store heat. This melts ice when the warm sea water gets in contact with sea ice’s frozen surfaces).

(7.) The brokenness of North Pole’s ice cover and its reduced ice amount reduces the sea ice congestion (gridlock) making it much easier to escape to the Atlantic Ocean via the Fram Strait, the Barents and Kara Seas."

Albert Kallio, commenting on above image:

The Arctic Ocean ice cover has broken up unexpectedly early and the sea ice is particularly shattered in the viscinity of the North Pole posing huge uncertainties how the sea ice (and the polar bears, walruses and seals on it) can survive until autumn. The dark violet represents good, solid sea ice cover. The more coloured, the more shattered and reduced the sea ice cover is.


Within the last few weeks, cyclonic activity has returned and once again caused substantial thinning and weakening of the sea ice near the North Pole. Ice near the center of cyclonic activity, recently 2 to 2.5 metres thick, has thinned to roughly 1.25 metres. This in less than 2 weeks: unprecedented so early in the melt season. More significantly, in the last few days a gaping “hole” has appeared in the much thicker ice just north of the Canadian Arctic Archipelago. Ice that was recently 3.5 to 4 metres thick is now less than 2 metres thick in the hole.

The hole is likely due to a combination of divergence of the ice away from the rotating cyclone center, and the upwelling (churning up) of warm, salty sea water below. The most rapid melting and ice deterioration is occurring below the surface (where the cold surface air temperature can’t slow melting).

The magnitude of the most recent cyclonic activity is not unusual, although the persistence is. What is also new in the equation is the ability of these common cyclones to degrade the ice, and do so very early in the melt season. Also new is the substantial increase in amplitude, frequency and duration of cyclonic activity in the Arctic Ocean basin. The thinning ice cover not only breaks up easier now (even by relatively small and weak cyclones), more open water leads to an increase in melting and storm intensity.

It’s for all these reasons I find it extremely difficult to comprehend how any sea ice will be left after this year’s summer ‘melt season’.