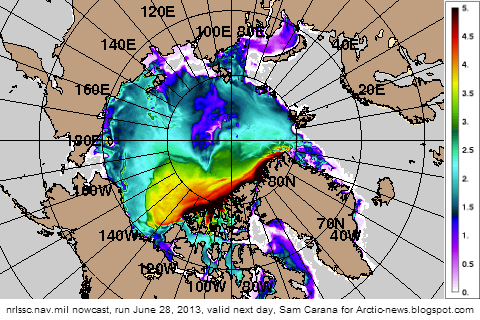 Above image, edited from Naval Research Laboratory, shows that a large area has developed at the center of the Arctic Ocean with very thin ice, at some places down to virtually zero, i.e. open water.

This development is to a large extent caused by persistent cyclonic activity in the Arctic. The Arctic is warming up faster than anywhere else, and this is reducing the temperature difference between the Arctic and lower latitudes. As a result, the polar vortex and jet stream get distorted, resulting in extreme weather. This is graphically illustrated by the animation below, from the California Regional Weather Server.