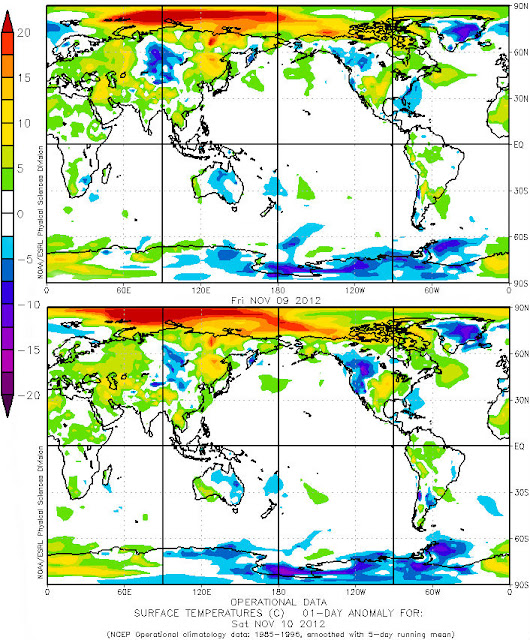 Paul Beckwith, regular contributor to this blog, comments as follows on the conditions in the Arctic:


“The Arctic meteorology is unprecedented at the moment. Huge ridges of high pressure are crossing the Arctic ocean cutting off the Siberian cold region from the North American region. Very little cold air is present in the entire system, and it is exhibiting very bizzare fragmentation. Nothing like a “normal” polar vortex is apparent.

The ridge could just be due to this greatly reduced volume of cold air, but I suspect there is much more to the situation then that. It seems that there must be some source of heat to create this ridge. Could be warm air rising up from open water regions in the Arctic, however most of the warm water is now isolated from the atmosphere by the sea ice.

It seems more likely to me that the high levels of methane with GWP > 150 or higher are causing higher long-wave absorption and heating in these regions, but I have not seen methane concentration distributions over the Arctic from AIRS satellites lately.” 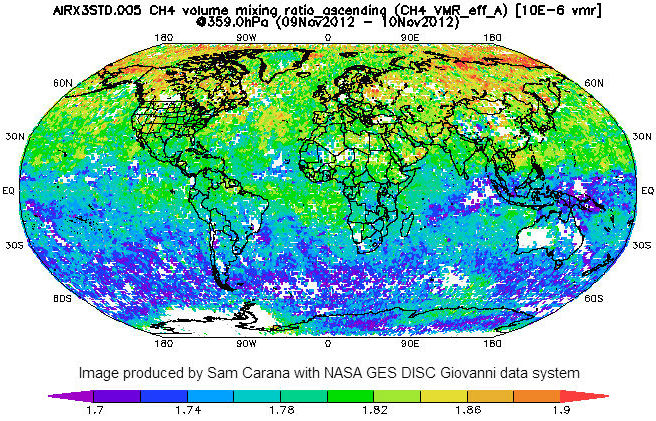 
“This is what abrupt climate change looks like. In the paleorecords global average temperatures increased over 6 degrees C within a decade or two, I suppose we will know more precise numbers in a few short years.”

My projections for our planet conditions when the sea-ice has all vanished year round (PIOMAS graph projects about 2024 for this; I forecast 2020 for this) are:

- Result: very fragmented, disjointed weather systems
- Basic weather: tropical rainforest like in some regions; arid deserts in others with few regions in between.

Note: This scenario would require significant emissions of methane from the Arctic. Without this methane, the scenario would still occur but would take longer. Disclaimer: Best guess and subject to rolling revisions!


Meanwhile, extreme weather continues to strike areas outside the Arctic. In the U.K, airports were closed due to snow, following a period of heavy rainfall in November.


“The Ewing-Dunn Precipitation (the lake-effect snow) from warmed-up Arctic Ocean has taken the Russian Government's winter preparations by suprise of its severity, with the Russian Government minister banging his fist as standing queues of vehicles reoccurs and is now 190 kilometres (120 miles) long between the capital Moscow and St. Petersburg.

I have been warning from the leaked files since July at this and other groups that December 2012 was going to be like this. We need to tell the Russian Interior Minister who bangs his fist on TV that he should not blame his road officials, but the global warming and loss of sea ice from the Barents and Kara Seas and generally warmed up North Atlantic - Arctic Ocean regions.”