From the start of 2012, the European Union (EU) required its members to include emissions from flights arriving at and departing from their airports in the EU scheme of emissions allowances and trading, while encouraging other nations to take equivalent measures. The EU exempts biofuel and claims to take a 'comprehensive approach' to reducing environmental impacts of aviation. To create space for political negotiations to get an international agreement regulating emissions from aviation, the EU has meanwhile postponed implementation of its directive by one year.

What kind of international agreement could be reached on aviation emissions? What policies work best? How do aviation policies fit into a comprehensive approach?

A Comprehensive Plan of Action on Climate Change

A comprehensive plan is best endorsed globally, e.g. through an international agreement building on the Kyoto Protocol and the Montreal Accord. At the same time, the specific policies are best decided and implemented locally, e.g. by insisting that each nation reduces specific emissions by a set annual percentage, and additionally removes a set annual amount of carbon dioxide from the atmosphere and the oceans, followed by sequestration, proportionally to its current emissions.

Policy goals are most effectively achieved when policies are implemented locally and independently, with separate policies each addressing the specific shifts that are each needed to reach agreed targets. Each nation can work out what policies best fit their circumstances, as long as they each independently achieve agreed targets. Counting emissions where they occur will encourage nations to adopt effective policies, such as imposing fees on the sales of products in proportion to the emissions they cause, and adopting product standards that ban products that would otherwise cause unacceptably high emissions while clean alternatives are readily available. 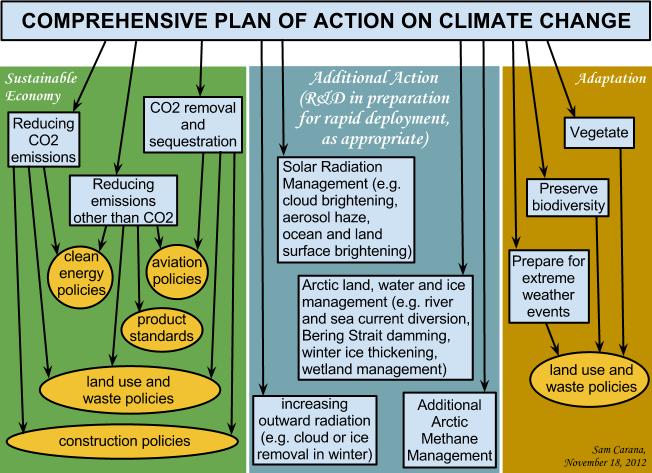 Policies aiming to achieve a shift to clean energy will apply to many sectors such as transportation (including aviation), power plants, and industry and buildings which are also large consumers of fossil fuel. The above image also shows policies specifically targeting aviation, in addition to clean energy policies that apply across sectors.

In line with such feebates, each nation could impose fees on jetfuel, while using the revenues for a variety of purposes, preferably local clean energy programs. Where an airplane lands arriving from a nation that has failed to add sufficient fees, the nation where the airplane lands could impose supplementary fees. Such supplementary fees should be allowed under international trade rules, specifically if revenues are used to fund direct air capture of carbon dioxide.

As said, apart from clean energy policies, it makes sense to additionally implement policies specifically targeting aviation. Airplanes not only cause carbon dioxide emissions, but also cause other emissions such as black carbon and NOx, contrails and cirrus cloud effects. The EU emissions scheme only targets a limited set of emissions, while also looking at their global warming potential, rather than the potential of emissions to cause warming locally, specifically in the Arctic. A joint 2011 UNEP/WMO report mentioned many measures to reduce black carbon and tropospheric ozone, adding that their implementation could reduce warming in the Arctic in the next 30 years by about two-thirds.

A 2012 study by Jacobson et al. concludes that cross-polar flights by international aviation is the most abundant direct source of black carbon and other climate-relevant pollutants over the Arctic. Rerouting cross-polar flights to instead circumnavigate the Arctic Circle therefore makes sense. While such rerouting consumes more fuel, it could reduce fuel use and emissions within the Arctic Circle by 83% and delay pollutant transport to the Arctic.

Given the need to act on warming in the Arctic, it makes sense to ban cross-polar flights. To further reduce the flow of pollutants to the Arctic caused by aviation, it makes sense to add fees on all jet flights. Such fees on jet flights would be additional to the above fees on fuel. This could further facilitate a shift from aviation toward cleaner forms of transportation, such as high speed rail. Where the revenues of such fees are used to fund direct air capture, they could also help kickstart an industry that could produce synthetic jetfuel and that could be instrumental in bringing atmospheric levels of carbon dioxide back to 280ppm.