How much warming did and could people cause?


In above image, temperatures have been adjusted to better reflect a preindustrial baseline (1750). The image indicates that the temperature in 2016 had crossed the 1.5°C (2.7°F) guardrail set by the Paris Agreement and was higher than it had been before during the Holocene.

James Hansen et al., in a 2017 analysis, conclude that maximum Eemian temperature was +1°C relative to preindustrial. Accordingly, to find temperatures as high as today's, one would have to go back some 3 million years, to times when temperatures were still coming down from the PETM mass extinction.
How do we know that we're well above 1.5°C anthropogenic global warming? How much warming did people already cause and how much further warming could people cause in the near future?

The graph below was created with the NASA L-OTI monthly mean global surface temperature anomalies from 1951-1980, and then adjusted by 0.29°C to cater for the baseline difference between 1900 and 1951-1980, which makes the anomaly 0°C in the year 1900 for the added polynomial trend.

While some contribution to the high temperatures in 2016 was due to El Niño, the trend will smooth  out much of such short-term variation. What's worrying is that the trend shows a definite acceleration of the temperature rise. The graph below shows how a combination of warming elements could bring the temperature rise from 1750 to the year 2026 up to 9.68°C or 17.42°F (annual) or 10.02°C or 18.04°F (for a monthly peak).

A later analysis shows that anthropogenic warming started well before the year 1750, making above graph conservative. To illustrate this, a graph from a later post is added below.
How could a rise of some 10°C (18°F)  by 2026 eventuate? The image below shows how such a rise could occur by the year 2026, based on a temperature rise of 0.3°C from 1750 to 1900, on anomalies for February and on progressive growth of warming elements. The rise from 1900 to 2016 is maintained for the years from 2018.

Above image shows elements that can contribute to such a rise, with the accumulated impact shown as the dotted line (total rise). The image below shows the elements contributing to such a rise in another way (stacked bar chart). 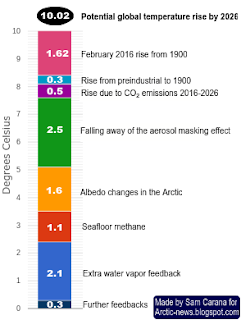 Rise from pre-industrial levels to 1900 (0.3°C)
Additional warming was caused by humans before 1900.

Accordingly, the next (light blue) element from the top down uses 0.3°C warming to reflect anthropogenic warming from pre-industrial levels to the year 1900. 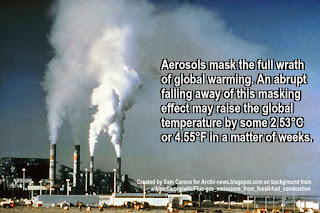 With dramatic cuts in emissions, there will also be a dramatic fall in aerosols that currently mask the full warming of greenhouse gases. From 1850 to 2010, anthropogenic aerosols brought about a decrease of ∼2.53 K, says a recent paper. While on the one hand not all of the aerosols masking effect may be removed over the next few years, there now are a lot more aerosols than in 2010.

Additionally, some aerosols have a warming effect and there may well be an increase in emission of these aerosols over the next decade. A 2.5°C warming due to removal of part of the aerosols masking effect therefore seems well possible by the year 2026, especially when considering further aerosol impact such as caused by burning of biomass, as discussed in this post. For more, see the aerosols page.

Albedo changes in the Arctic (1.6°C)
Warming due to Arctic snow and ice decline (i.e. of both sea ice and the snow and ice cover on land) may well exceed 2.6 W/m², calculated Professor Peter Wadhams in 2012. This could more than double the current net global warming caused by people since pre-industrial times.

Associated changes include the loss of the ice buffer (latent heat), greater heat transfer into the Arctic Ocean due to stronger winds (and the resulting freshwater lid on the North Atlantic) and more heat entering the atmosphere due to more open water in the Arctic Ocean.

A 1.6°C warming due to albedo changes and associated changes seems possible over the next few years, as discussed in this post.

Dr. Natalia Shakhova et al. wrote in a paper presented at EGU General Assembly 2008 that "we consider release of up to 50 Gt of predicted amount of hydrate storage as highly possible for abrupt release at any time." Authors calculated that such a release would cause 1.3°C warming by 2100.

This 1.3°C warming (by 2100) from an extra 50 Gt of methane seems conservative when considering that there now is only some 5 Gt of methane in the atmosphere, and over the next ten years this 5 Gt is already responsible for more warming than all the carbon dioxide emitted by people since the start of the industrial revolution.

Professor Peter Wadhams co-authored a study that calculated that methane release from the seafloor of the Arctic Ocean could yield 0.6°C warming of the planet in 5 years (see video at earlier post).

In conclusion, as temperatures keep rising, a 1.1°C warming due to methane releases from clathrates at the seafloor of the world's oceans seems well possible over the next few years and even more warming seems possible beyond that, as also discussed in this post.

Rising temperatures will result in more water vapor in the atmosphere (7% more water vapor for every 1°C warming), further amplifying warming, since water vapor is a potent greenhouse gas. Extra water vapor will result from warming due to the above-mentioned albedo changes in the Arctic and methane releases from the seafloor that could strike within years and could result in huge warming in addition to the warming that is already there now.

The temperature rise due to extra water vapor works immediately, i.e. it goes hand in hand with rises due to other warming elements. Given a possible additional warming of 2.7°C due to just two elements, i.e. Arctic albedo changes and seafloor methane, an additional warming over the next few years of 2.1°C due to extra water vapor in the atmosphere therefore does seem well possible over the next few years.

Further feedbacks will result from interactions between the above elements.

Additional water vapor in the atmosphere and extra energy trapped in the atmosphere will result in more intense storms and precipitation, flooding and lightning. Flooding can cause rapid decomposition of vegetation, resulting in strong methane releases. Furthermore, plumes above the anvils of severe storms can bring water vapor up into the stratosphere, contributing to the formation of cirrus clouds that trap a lot of heat that would otherwise be radiated away, from Earth into space. The number of lightning strikes can be expected to increase by about 12% for every 1°C of rise in global average air temperature. At 3-8 miles height, during the summer months, lightning activity increases NOx by as much as 90% and ozone by more than 30%. The combination of higher temperatures and more lightning will also cause more wildfires, resulting in additional emissions such as of carbon dioxide, methane and carbon monoxide. Ozone acts as a direct greenhouse gas, while carbon monoxide can indirectly cause warming by extending the lifetime of methane.

- Changes to soils and ecosystems on land

Additional warming of the atmosphere can also result when sinks that are currently holding back warming, instead turn into sources. An increase in the uptake of carbon by vegetation until now was attributed in a recent study to higher CO₂ levels in the atmosphere. This land sink now appears to turn into a source of carbon emissions, due to deforestation and soil degradation caused by agricultural practices and more extreme weather, as discussed in this post.

For years, global warming was also thought to be held back by growth of sea ice around Antarctica and the greater albedo resulting from that. As the image below shows however, global sea ice extent has been extremely low for more than a year. 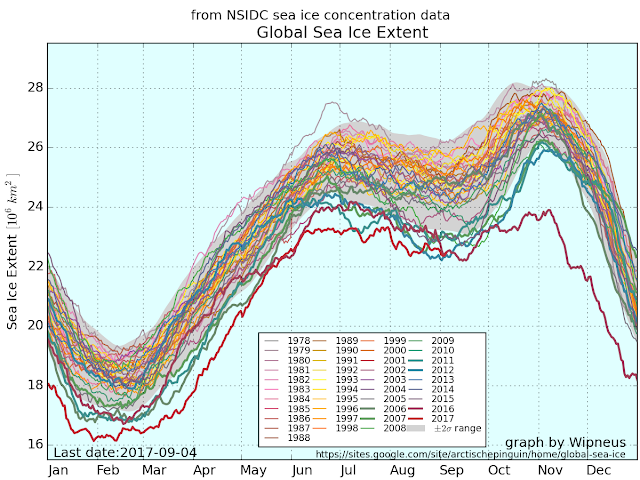 Ever warmer oceans and stronger winds that move sea ice away from Antarctica make the outlook for global sea ice grim. Furthermore, higher temperatures look set to cause more growth of algae and melting, resulting in further albedo decline.

Warmer water tends to form a layer at the surface that does not mix well with the water underneath, as discussed here. Stratification reduces the capability of oceans to take up heat from the atmosphere, thus speeding up warming of the atmosphere.

Until now, oceans have been taking up 93.4% of the extra heat caused by emissions by people. So, even a small decrease in the amount of heat that oceans take out of the atmosphere would result in a strong rise of global air temperatures.

In conclusion, the joint impact from further feedbacks may well amount to an additional 0.3°C warming over the next few years, or much more than that over more years, cancelling out possible over-estimations in other elements.

A closer look at each of these warming elements shows that abrupt warming could take place in a matter of years. As far as the first two elements are concerned, i.e. the rise from 1900 and the rise from 1750 to 1900, this has already eventuated. The speed at which further warming elements can strike is depicted in the image below, i.e. the rise could for a large part occur within years and in some cases within days and even immediately.

Assessing the Danger
The danger can be looked at on three dimensions: timescale, probability and severity. On the severity dimension, a 10°C temperature rise is beyond catastrophic, i.e. we're talking about extinction of species at massive scale, including humans. On the probability dimension, the danger appears to be progressing inevitably toward certainty if no comprehensive and effective action is taken.

How fast could temperatures rise? As the image shows, a rise of more than 10°C (18°F) could take place in a matter of years, resulting in mass extinction of many species, including humans.

In summary, adding up all the warming associated with the above elements results in a total potential global temperature rise (land and ocean) of more than 10°C or 18°F in a matter of years, by as early as 2021, assuming that no geoengineering will take place over the next few years.

Accordingly, this would lead to numbers of climate-related global deaths in line with the prognosis below.
The situation is dire and calls for comprehensive and effective action as described in the Climate Plan.