Carbon dioxide levels in the atmosphere are accelerating. As illustrated by the image below, a linear trend hardly catches the acceleration, while a polynomial trend does make a better fit. The polynomial trend points at CO₂ levels of 437 ppm by 2026.

This worrying acceleration is taking place while energy-related have been virtually flat over the past few years, according to figures by the EIA and by the Global Carbon Project. So, what makes growth in CO₂ levels in the atmosphere accelerate? As earlier discussed in this and this post, growth in CO₂ levels in the atmosphere is accelerating due to continued deforestation and soil degradation, due to ever more extreme weather events and due to accelerating warming that is making oceans unable to further take up carbon dioxide.

Ocean warming is accelerating on the Northern Hemisphere, as illustrated by above image, and a warmer Atlantic Ocean will push ever warmer water into the Arctic Ocean, further speeding up the decline of the sea ice and of permafrost.

Worryingly, the linear trend in the right panel points at zero snow cover in 2017, which should act as a warning that climate change could strike a lot faster than many may expect.

A recently-published study warns that permafrost loss is likely to be 4 million km² (about 1.5 million mi²) for each 1°C (1.8°F) temperature rise, about 20% higher than previous studies. Temperatures may well rise even faster, due to numerous self-reinforcing feedback loops that speed up the changes and due to interaction between the individual warming elements behind the changes.

One of the feedbacks is albedo loss that speeds up warming in the Arctic, in turn making permafrost release greenhouse gases such as carbon dioxide, nitrous oxide and methane.

Higher temperatures on land will make warmer water from rivers enter the Arctic Ocean and trigger wildfires resulting in huge emissions including black carbon that can settle on sea ice.

Given the speed at which many feedbacks and the interaction between warming elements can occur, Arctic sea ice volume may decline even more rapidly than the image on the right may suggest.

As the Gulf Stream pushes warmer water into the Arctic Ocean, there will no longer be a large buffer of sea ice there to consume the heat, as was common for the entire human history.

Moreover, forecasts are that temperatures will keep rising throughout 2017 and beyond. 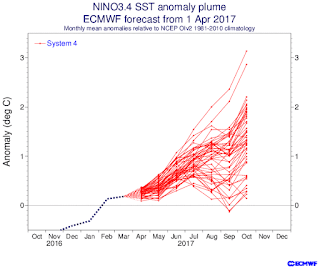 The Australian Bureau of Meteorology reports that seven of eight models indicate that sea surface temperatures will exceed El Niño thresholds during the second half of 2017.

The image on the right, by the ECMWF (European Centre for Medium-Range Weather Forecasts), indicates an El Niño that is gaining strength.

For more than half a year now, global sea ice extent has been way below what it used to be, meaning that a huge amount of sunlight that was previously reflected back into space, is now instead getting absorbed by Earth, as the graph below shows.
Where can all this extra heat go? Sea ice will start sealing off much of the surface of the Arctic Ocean by the end of September 2017, making it hard for more heat to escape from the Arctic Ocean by entering the atmosphere.

It looks like much of the extra heat will instead reach sediments at the seafloor of the Arctic Ocean that contain huge amounts of methane in currently still frozen hydrates.

The danger is that more and more heat will reach the seafloor and will destabilize methane hydrates contained in sediments at the bottom of the Arctic Ocean, resulting in huge methane eruptions.

As the image on the right shows, a polynomial trend based on NOAA July 1983 to January 2017 global monthly mean methane data, points at twice as much methane by 2034. Stronger methane releases from the seafloor could make such a doubling occur much earlier.

Meanwhile, methane levels as high as 2592 ppb were recorded on April 17, 2017, as shown by the image below. The image doesn't specify the source of the high reading, but the magenta-colored area over the East Siberian Sea (top right) looks very threatening. 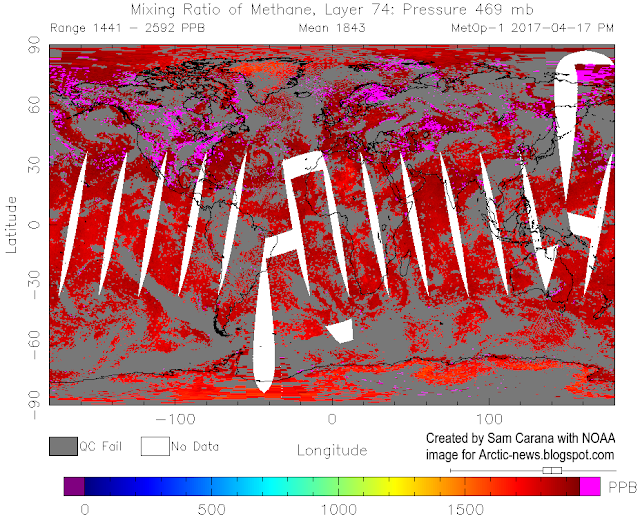 We already are in the Sixth Mass Extinction Event, given the rate at which species are currently disappearing from Earth. When taking into account the many elements that are contributing to warming, a potential warming of 10°C (18°F) could take place, leading to a rapid mass extinction of many species, including humans.

How long could it take for such warming to eventuate? As above image illustrates, it could happen as fast as within the next four years time.

• An observation-based constraint on permafrost loss as a function of global warming, by Chadburn et al. (2017)
http://www.nature.com/nclimate/journal/vaop/ncurrent/full/nclimate3262.html