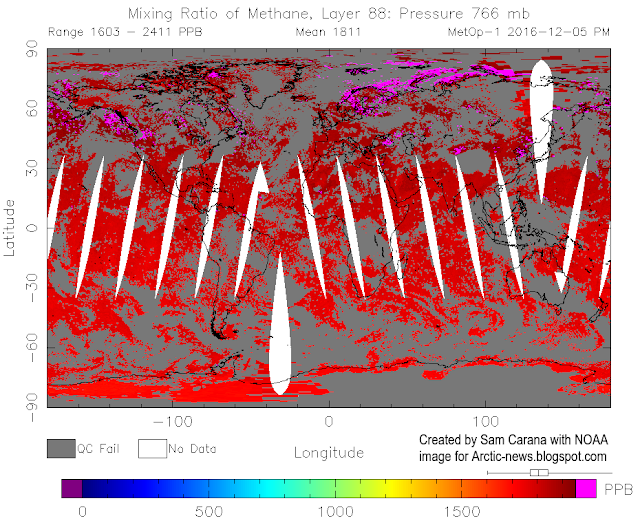 
Methane levels over the Arctic Ocean have been high for more than a month. The video below, with a soundtrack by Daniel Kieve, shows methane levels from October 26, 2016 to November 25, 2016.

Indeed, large quantities of methane appear to be erupting from seafloor of the Arctic Ocean and, as this methane rises in the atmosphere, it moves closer to the Equator, resulting in higher methane levels there as well. Above image further illustrates that seafloor methane appears to be pushing up mean global methane level at higher altitudes.

The image below shows the temperature rise of the oceans. Temperatures are rising particularly rapidly on the Northern Hemisphere.
The huge amounts of energy entering the oceans translate into higher temperatures of the water and of the air over the water, as well as higher waves and stronger winds. Much of that heat is carried by the Coriolis force along the Gulf Stream from the coast of North America via the North Atlantic into the Arctic Ocean. 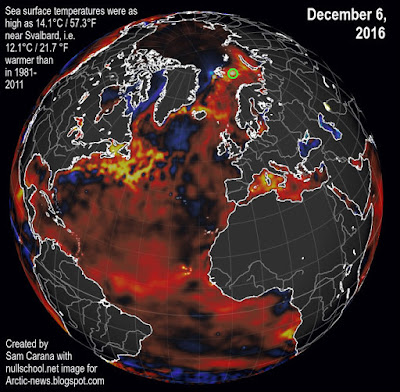 The rise in ocean heat is threatening to cause ever larger eruptions of methane from the seafloor.

As described at the Extinction page, methane eruptions from the seafloor could well cause a 1.1°C temperature rise over the next ten years, and in combination with other elements, this is threatening to cause global temperature to rise 10°C or 18°F by 2026.

• A pdf of the extinction page and an introduction to the Climate Plan can be downloaded from
https://sites.google.com/site/samcarana/climateplan/Climate-Plan-by-Sam-Carana.pdf?attredirects=0&d=1