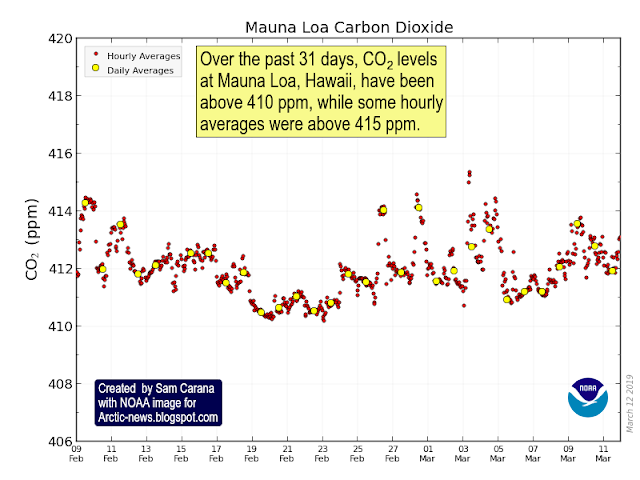 The rise in the levels of carbon dioxide (CO₂) in the atmosphere continues to accelerate. Over the past 31 days, CO₂ levels at Mauna Loa, Hawaii, have been above 410 ppm, while on March 3, 2019, some average hourly readings exceeded 415 ppm. The levels recorded in the year up until now weren't expected to occur until April/May 2019, as illustrated by the image below. 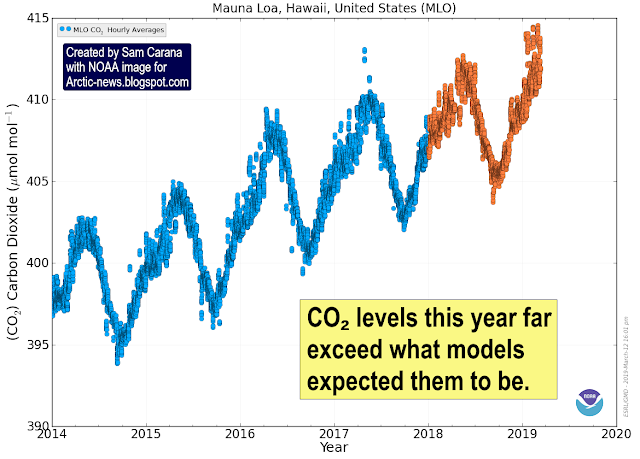 How much could carbon dioxide levels grow over the next decade?

An earlier Met Office forecast expects annual average CO₂ levels at Mauna Loa to be 2.75 ppm higher in 2019 than in 2018. Looking at above levels, growth could be even stronger than that.

The image below shows NOAA 1959-2018 CO₂ growth data (black) with above Met Office forecast added for 2019 (brown). The growth figures for 2018 and 2019 are spot on a trend that is added in line with an earlier analysis.
Strong CO₂ growth could occur over the next few years, due to releases from increased burning of fossil fuel and biomass, more forest fires and melting permafrost, and the added impact of stronger El Niño events and less uptake of carbon dioxide by oceans and ecosystems. An earlier analysis concludes that CO₂ growth could raise temperatures by 0.5°C or 0.9°F by 2026.

Levels of methane (CH₄) are also rising at accelerating pace, as illustrated by the image below.
Above graph shows July 1983 through October 2018 monthly global methane means at sea level, with added trend. Higher methane means can occur at higher altitudes than at sea level, as illustrated by the image below that shows the highest mean methane levels recorded by the MetOp satellites on March 10 for the years 2013 to 2019 at selected altitudes.

Global methane levels in March are at a seasonal low. The highest global means occur in September. On September 3, 2018, global methane means as high as 1905 ppb were recorded at 307 mb, an altitude at which some of the strongest growth in methane has occurred, as discussed in earlier posts such as this one. 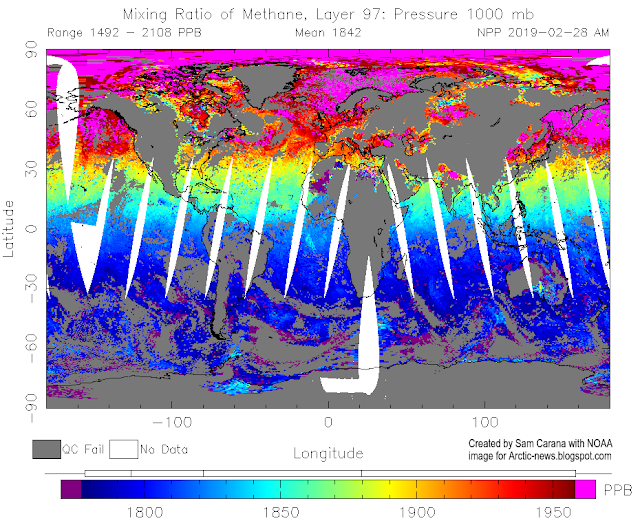 The MetOp satellites have some difficulty measuring methane at lower altitudes. Above NPP satellite image shows high methane levels across the Arctic Ocean close to sea level, with mean levels of 1842 ppb recorded at 1000 mb, i.e. surface level. This indicates that high methane levels do occur as a result of releases from the Arctic Ocean. The above-mentioned analysis concludes that seafloor methane releases alone could raise the global temperature by 1.1°C or 1.98°F by 2026. Growth in methane releases elsewhere, e.g. due to permafrost melt and forest fires, could further raise methane levels and thus temperatures. 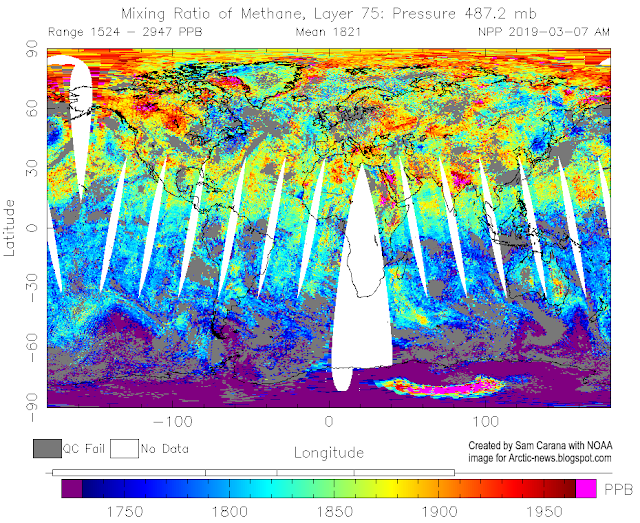 Above image shows that peak methane levels were as high as 2947 ppb on March 7, 2019. The image also shows worryingly high methane levels over Antarctica, as also discussed earlier, in a 2013 post.

Growth in nitrous oxide (N₂O) is not often discussed, yet it's very important both because of the high global warming potential and long lifetime of N₂O, and because of the ozone depletion it causes in the stratosphere. The image below shows mean levels of N₂O of 320 ppb, with peaks reaching levels as high as 345.2 ppb at 1000 mb (sea level) on March 10, 2019. 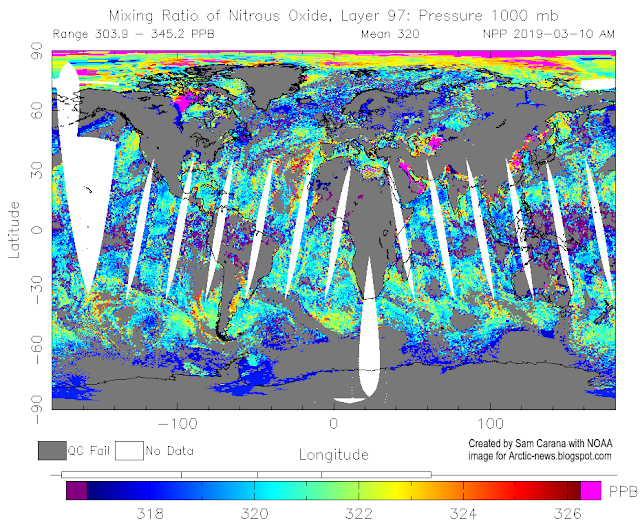 Above image also shows high levels of nitrous oxide over the Arctic Ocean. Levels of greenhouse gases in the atmosphere are generally higher in the Arctic than in the rest of the world, which contributes to the accelerating warming of the Arctic.

In summary, greenhouse gases in the atmosphere are rising at accelerating pace, and this spells bad news, the more so since, next to CH₄, CO₂ and N₂O, there are additional warming elements that can further speed up the temperature rise, such as black carbon, or soot, water vapor, loss of Arctic sea ice, etc.

The situation is dire and calls for comprehensive and effective action as described in the Climate Plan and as also discussed in this recent post.