Watch where the wind blows

The Arctic looks set to be pummeled by strong winds on February 5, 2015, as shown by the Climate Reanalyzer forecast below. 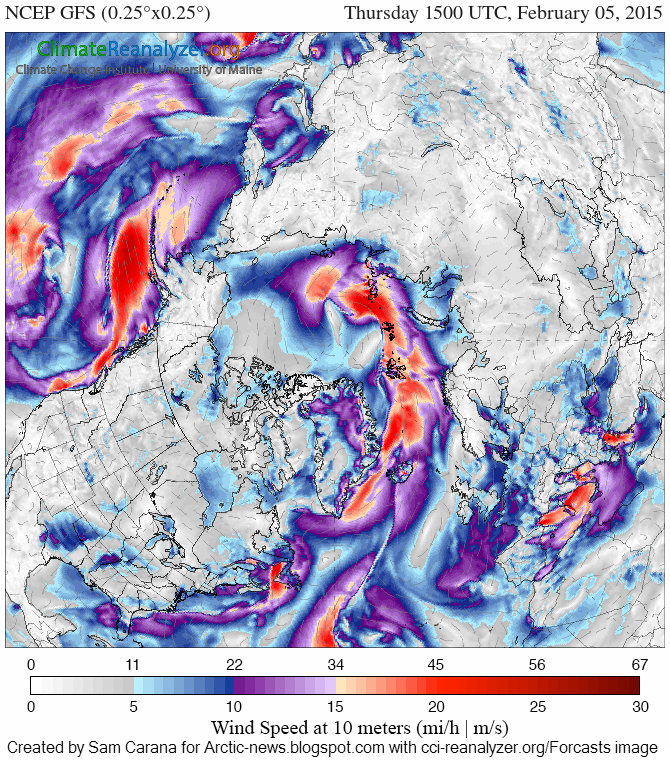 The video below, based on Climate Reanalyzer images, watch the situation unfold over a period of 9 days

Emissions are causing greater warming of the Gulf Stream and the Arctic. As a result, there is less temperature difference between the equator and the Arctic, slowing down the speed at which the jet streams circumnavigate the globe, while the jets can also become wavier, which in turn can cause extreme weather events.

Changes to the jet streams can thus fuel strong winds, and such winds can bring warmer air into the atmosphere over the Arctic Ocean. On February 5, 2015, surface temperatures over a large part of the Arctic Ocean were more than 20°C (36°F) warmer compared to what they were from 1985 to 1996. 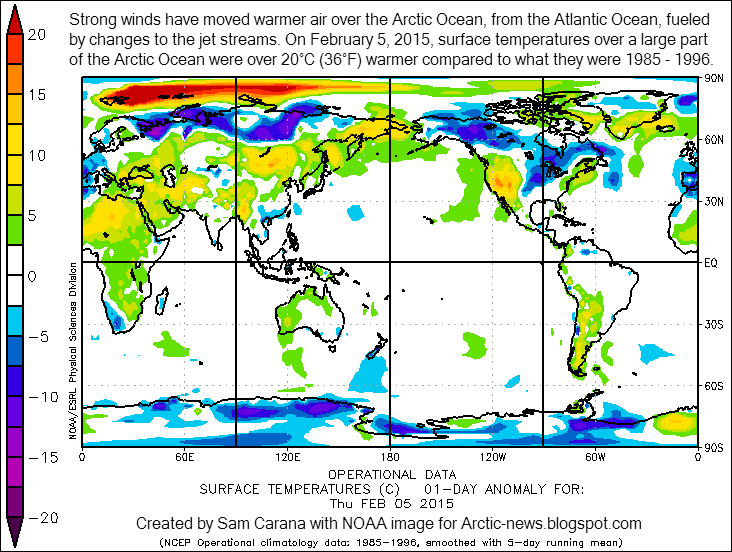 Besides increasing the transport of warm water into the Arctic Ocean and bringing warmer air into the atmosphere over the Arctic Ocean, strong winds can also break up the sea ice by sheer brute force of the waves caused by the wind. 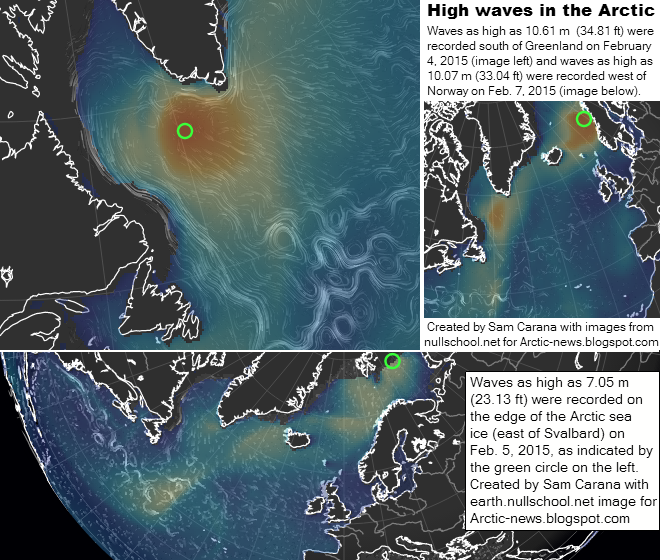 Waves that break up the sea ice into smaller pieces can speed up melting, especially in summer. More wind also means more water evaporation, and warmer air holds more water vapor, so this can result in huge rainstorms that can rapidly devastate the integrity of the ice. Strong winds thus constitute a feedback that can result in more open waters in the Arctic Ocean (feedback #6 on the diagram below).

The dual image below, with images from Climate Reanalyzer, shows high sea surface temperatures around North America and at the edges of the Arctic sea ice. This contributes to surface temperatures that are 20°C (36 °F) higher than what they used to be in Eastern Siberia. At the same time, temperatures on land elsewhere in Siberia, on the North Pole and in parts of Canada and Greenland can go down to 40 degrees below zero. 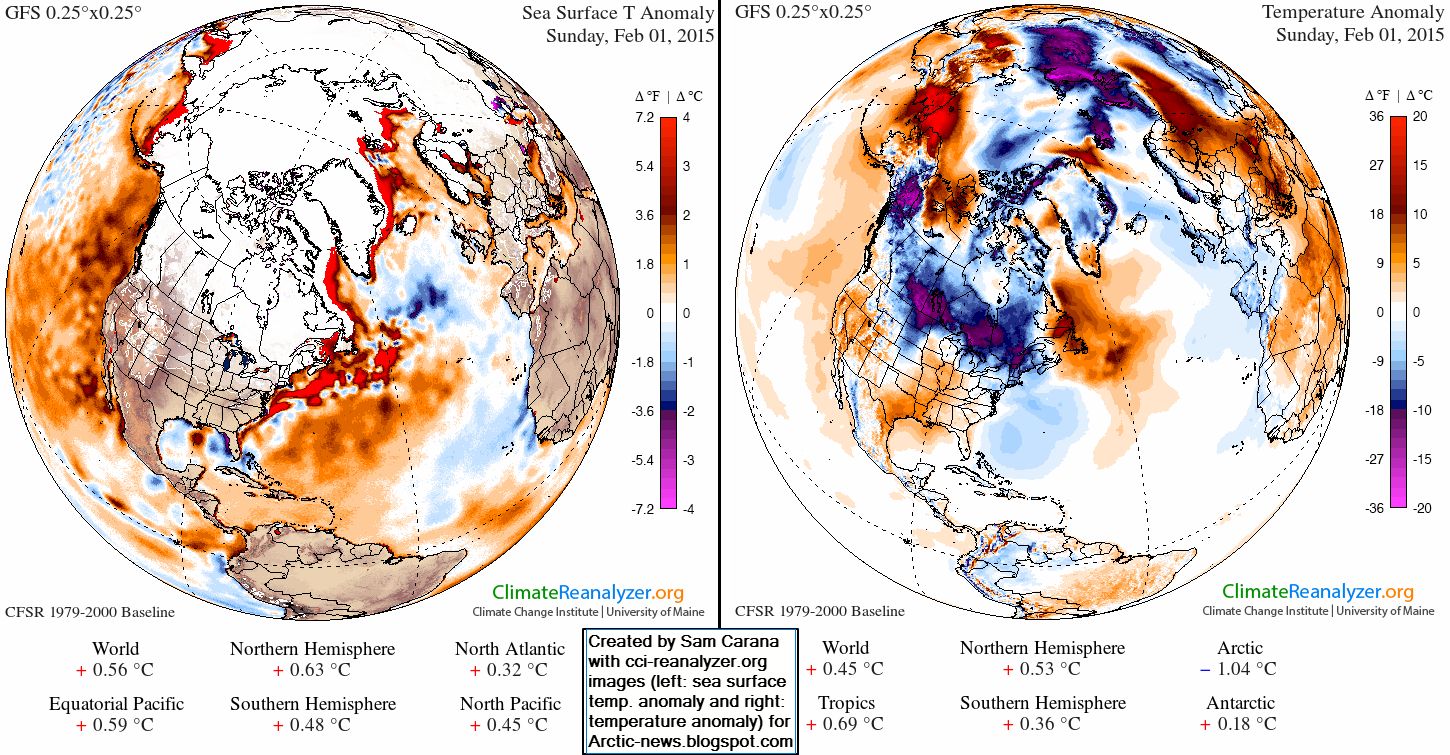 Accelerated warming of the Arctic is changing the jet streams, in turn contributing to the likelyhood that such strong winds will hit the Arctic. The high temperature difference between the hot spot off the North American east coast and the cold spot over Siberia fuels such strong winds. The dual images below show the jet stream's elongated path over Greenland. Accordingly, temperature anomalies in Greenland are reaching the top end of the scale.

The big danger is that such strong winds will warm up the Arctic Ocean and cause huge amounts of methane to erupt from its seafloor. 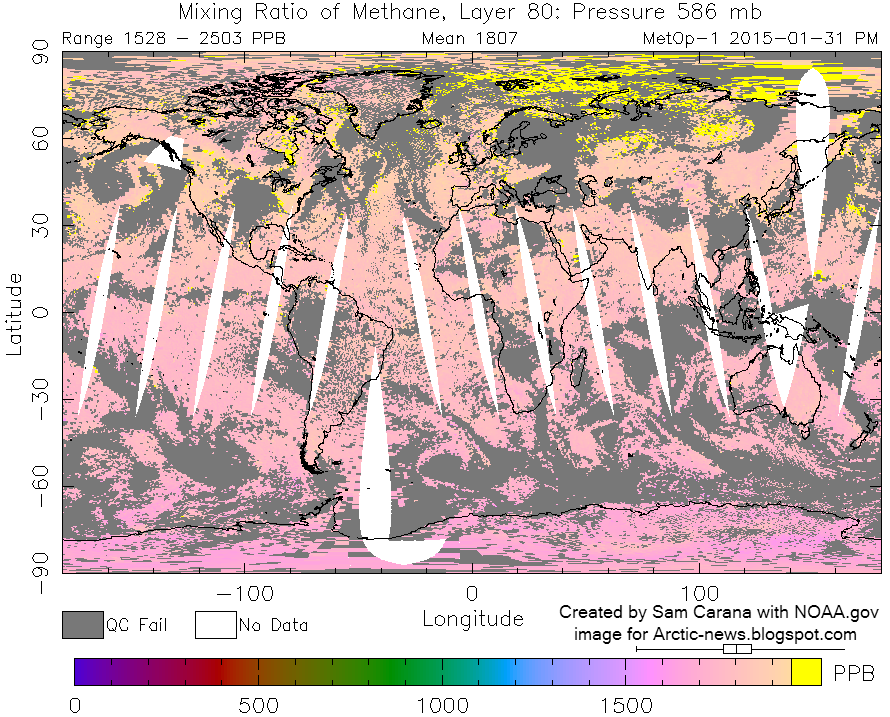 Such methane eruptions constitute yet another feedback that further contributes to warming in the Arctic. For more feedbacks, see the image below.