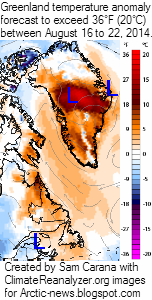 A heatwave with temperature anomalies exceeding 36°F (20°C) is expected to hit Greenland between August 16 and 22, 2014, as illustrated by the image on the left and the animation on the right.

Such heatwaves can be expected to hit the Arctic more frequently and with greater intensity, as temperatures in the Arctic are rising faster than elsewhere on Earth.

Such heatwaves can result in massive melting on Greenland, as persistent heat changes the texture of the snow and ice cover, in turn reducing its reflectivity. This makes that less sunlight is reflected back into space and is instead absorbed.

The image below illustrates what a difference the presence of sea ice can make.

As the NSIDC/NOAA graphs below shows, melting on Greenland has been relatively modest this year when compared to the situation in 2012. By July 12, 2012, 97% of the ice sheet surface had thawed, according to this NASA analysis and this NOAA Arctic Report Card.

Projections of melting on Greenland have long been based on a warming atmosphere only, ignoring the warmer waters that lubricate glaciers and that warm Greenland's bedrock canyons that sit well below sea level.

Furthermore, there are growing quantities of black carbon deposits as a result of burning of fossil fuel and biomass. High temperatures have recently caused ferocious wildfires in Canada that have in turn caused a lot of black carbon to go up high into the atmosphere.

And of course, the atmosphere over the Arctic is warming up much faster than most models had projected. This in turn causes triggers further feebacks, including more extreme weather events such as heatwaves and rain storms that can be expected to hit Greenland with ever more frequency and ferocity. Further feedbacks include methane eruptions from the heights of Greenland, as discussed at the Arctic Feedbacks Page.

When also taking into account the accelerating impact of such factors on melting in Greenland, sea levels could rise much faster than anticipated, as illustrated by the image below. 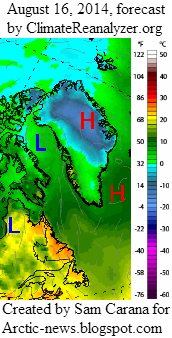 Note that sea level rise is only one of the many dangers of global warming, as discussed in the 2007 post Ten Dangers of Global Warming.

The image on the right shows a temperature forecast for August 16, 2014, with parts of Greenland changing in color from blue into green, i.e. above the melting point for snow and ice.

Such high temperatures are now hitting locations close to the North Pole ever more frequently, due to the many feedbacks that are accelerating warming in the Arctic, as discussed at this Feedbacks page.

One of the most dangerous feedbacks is a sudden eruption of huge quantities of methane from the seafloor of the Arctic Ocean, as discussed in a recent post.

The impact of such feedbacks can be accumulative and interactive, resulting in self-reinforcing feedbacks loops that can escalate into runaway warming.

Below is another forecast by ClimateReanalyzer for August 16, 2014, showing the remarkable ‘greening’ of Greenland, as well as the very high temperatures reaching the higher latitudes of North America. 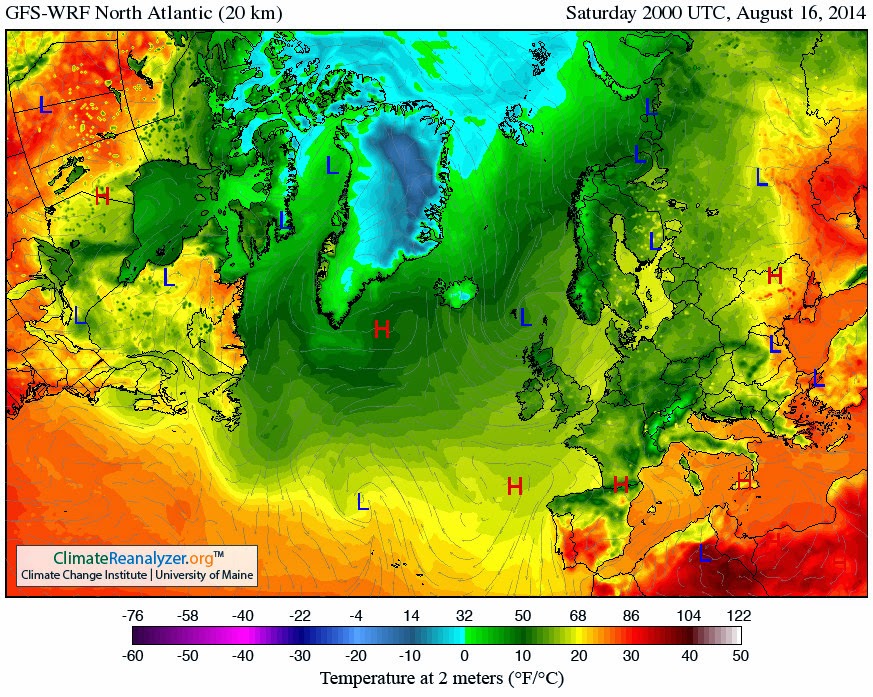 Also see the very high sea surface temperatures around Greenland on the image below, created with ClimateReanalyzer.