Methane Levels going through the Roof

On November 9, 2013, methane readings well over 2600 ppb were recorded at multiple altitudes, as illustrated by the image below.

Where did these high levels occur? Methane levels were low on the southern hemisphere and, while there were some areas with high readings over North America and Asia, there were no areas as wide and bright yellow as over the Arctic Ocean (the color yellow indicating readings of 1950 ppb and higher on above map). 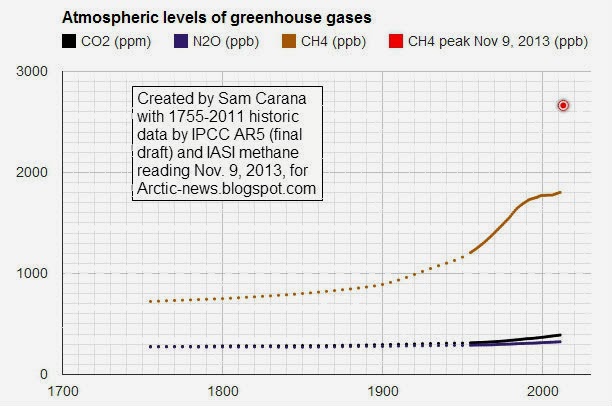 Recent peak levels of methane over the Arctic Ocean may well have been even higher, since NOAA didn't release any readings for November 5-7, 2013.

Meanhwile, sea ice extent has stopped growing, as illustrated by the NSIDC graph below. 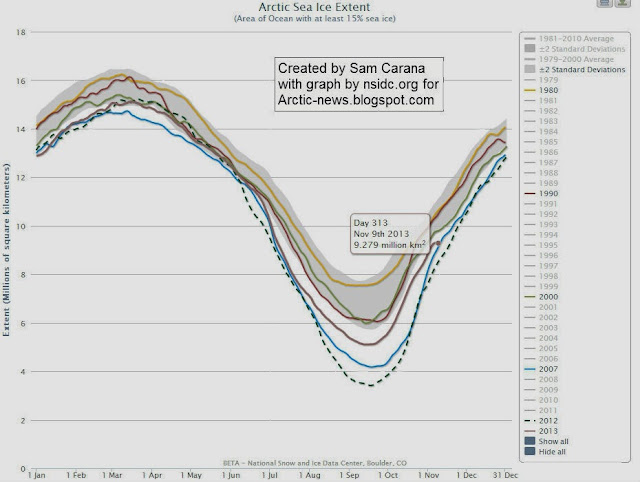 Data from the Cryosphere Today show that the area covered by sea ice has actually fallen over the past few days, as illustrated by the image below.

High methane levels are contributing to temperature anomalies, by trapping additional sunlight in the atmosphere over the Arctic Ocean.

Furthermore, strong winds have hit the sea ice, as the recent post Methane, Faults and Sea Ice warned. Strong winds are pushing sea ice inward in the Kara Sea and in the Chukchi Sea, while pushing sea ice - up to 5 meters thick - out of the Arctic Ocean along the coast of Greenland, as illustrated by the Naval Research Laboratory animation below.

The Naval Research Laboratory image below shows ice speed and drift on November 9, 2013.

So, could Arctic sea ice collapse and totally disappear in September 2014? Posts at this blog have repeatedly warned about this, e.g. in this post. The image below, created by Wipneus, shows an exponential trendline pointing at zero volume sea ice in September 2016. 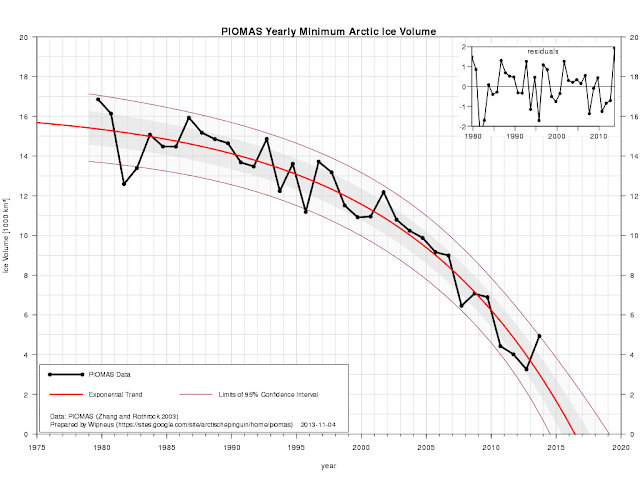 All data over the past two decades have fallen within the 95% confidence limits of an exponential trendline that points at imminent loss of all Arctic sea ice within years. September 2013 may have been "only" the 4th lowest on record, but such variability can be expected and may well cause sea ice to disappear completely as early as September 2014.

Strong winds can speed up such a collapse. On this point, it's good to remember what Prof. Peter Wadhams warned about in 2012:

Guy McPherson lists 26 feedbacks that speed up warming, and many of these feedbacks occur in the Arctic, as described in the post Diagram of Doom.

Soon, calculates Prof. Peter Wadhams, the albedo loss due to decline of snow and ice in the Arctic will effectively more than double the net radiative forcing resulting from the emissions caused by all people of the world. Additional warming caused by methane releases from the Arctic seabed could be even more devastating.