High levels of methane were recorded all over the Arctic Ocean on November 19, 2013, as illustrated by the image below. The image also shows that most methane was present over the fault line that crosses the Arctic Ocean (as also indicated on the inset).

A recent post described that more methane may actually be present closer to the North Pole than IASA images may indicate. This because measurements can be obscured by clouds. If no data are recorded over a certain area, no methane levels will show up on images for the respective area. This was the case on November 17, 2013, when the Arctic Ocean was quite cloudy, and little or no data were recorded for the center of the Arctic Ocean.

On November 19, 2013, the sky was much clearer, resulting in a lot of data from the center of the Arctic Ocean, as also illustrated by the image below.

In conclusion, high methane levels can actually be present all over the Arctic Ocean, even when images only show high levels in some areas.

An earlier post described how the sea ice can act as a shield, especially when the ice is more than one meter thick.

How does this rhyme with the above image? The November 19, 2013, Naval Research Laboratory image on the right shows that the sea ice was meters thick in some locations where methane shows up on the top image.

So, is methane actually rising from the seafloor of the entire Arctic Ocean, perforating even the thickest ice and entering the atmosphere all across the Arctic Ocean? Or, if thick sea ice does act as a shield, how did methane appear all over the Artic Ocean in such huge quantities? 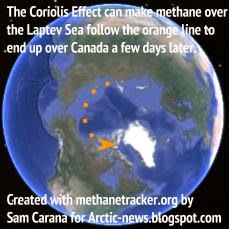 The images on the right indicate that the methane may actually only rise from the seafloor in a few locations.

As the top image on the right says, the Coriolis Effect can make methane over the Laptev Sea end up over Canada a few days later. So, methane may not be perforating the sea ice in the north of Canada, but may instead originate from elsewhere in the Arctic.

The animation underneath shows methane readings from November 9 to 19, 2013, with each of the 20 frames covering a period of 24 hours and with frames following each other up 12 hours after each other. As the animation shows, it looks like methane is predominantly entering the atmosphere at specific locations, most notably along the fault line that crosses the Arctic Ocean.

It may well be that this methane ends up all the way in Baffin Bay, to the left of Greenland. Since the Greenland ice sheet is 3 kilometers (1.9 miles) thick, this may form a natural barrier that keeps the methane there, also helped by winds rising vertically from Baffin Bay to well above Greenland's mountains. Methane may also be traveling under the sea ice, all the way from the Gakkel Ridge and the Laptev Sea right to Baffin Bay.

On the other hand, it could also be that hydrates underneath the sea bed of Baffin Bay itself have become destabilized and that, since the ice over Baffin Bay is rather thin, methane has no problem perforating the ice and is entering the atmosphere there in huge quantities.

Either way, the end-conclusion is that the methane that is now showing up all over the Arctic Ocean, is rising from the seafloor, due to destabilization of sediments that hold huge amounts of methane in the form of free gas and hydrates. As warming in the Arctic continues to accelerate, the danger is that this will cause more methane to rise from the seafloor and that the methane itself will contribute to warming in the Arctic, in a deadly spiral set to cause abrupt climate change at a devastating scale.