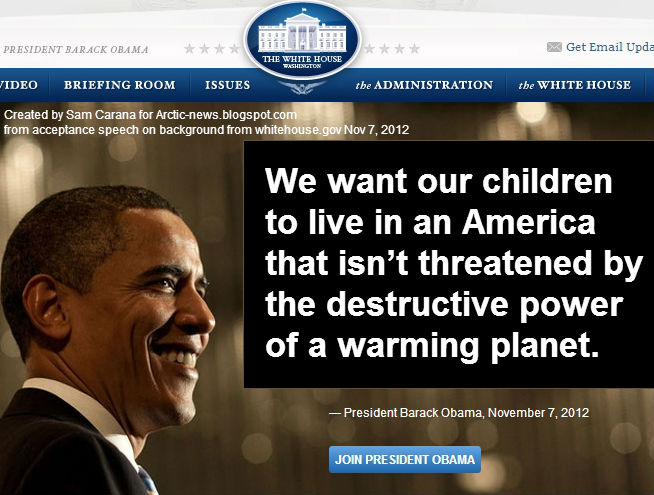 In a move giving hope to environmentalists, climatologists, scientists and humanity, President Obama mentioned climate change in his acceptance speech last night after winning his bid for re-election.

Despite all the threats that America faces, Obama zeroed in on climate change.


“We want our children to live in an America that isn't burdened by debt, that isn't weakened by inequality, that isn't threatened by the destructive power of a warming planet.”

Although climate change was not mentioned once in the candidate’s debates between Romney and Obama, clearly our warming climate is on the President’s mind.

After Hurricane Sandy hit the East Coast and cost lives and billions of dollars in damage, the subject of climate change has repeatedly been brought up, and the tide of public opinion on global warming has shifted – with over 70% of the U.S. now believing that climate change is real.

Days before the election and in the aftermath of Hurricane Sandy, the subject of climate change also shifted the thoughts of some on who to vote for in the election.

Mayor Michael R. Bloomberg of New York decided to vote for Obama saying he had decided that Mr. Obama was the “better candidate to tackle the global climate change, which he believes might have contributed to the violent storm.”


“Our climate is changing”, Bloomberg wrote. “And while the increase in extreme weather we have experienced in New York City and around the world may or may not be the result of it, the risk that it may be - given the devastation it is wreaking - should be enough to compel all elected leaders to take immediate action.”

Although the debates featured both candidates speaking of drilling for oil, it looks like the President’s agenda will be to continue focusing on clean energy, sustainability and green issues. Although there were some failed attempts to implement Obama's policies in his first term, we can be sure to expect the continuation of working towards a more sustainable future in the next 4 years.

When elected in 2008, President Obama had high hopes for addressing climate change, but with the focus then on saving the faltering economy, bailing out the banks and a corrupted Wall Street system, attention was diverted away from the subject. Despite the threat of an economic meltdown when Obama first took office, there was still a major push towards creating green companies, researching alternative energy sources and a focus on green energy jobs.

Although the President faced opposition from many Republican leaders who didn't believe in climate change, the tide of public opinion and the necessity to address climate change has many people concerned. With extreme weather on the rise and costing lives and billions of dollars in damage, people are also waking up to the growing threat of a catastrophic release of methane gas from the rapidly thawing Arctic.

Methane gas is many times more powerful than carbon dioxide, and has the ability to send the Earth into runaway and/or abrupt climate change.

In a recent plea to world leaders to address the growing threat of climate change: Why Arctic Sea Ice Matters To You and Me (pdf), John Nissen of AMEG (Arctic Methane Emergency Group) didn't mince words when he put this out on the table for world leaders to ponder:


“We are toppling over the cliff edge. Collapse of sea ice could be even more dramatic next year. We face an almost irreversible transition to an ice-free Arctic. Only immediate and drastic action to cool the Arctic can stop it now. The consequences of further meltdown would be dire for you and all your citizens. The weather extremes we've witnessed this year could get far worse, leading to widespread crop failures and an ever deepening food security crisis affecting every country in the world.”

Written in September of 2012, before Hurricane Sandy hit, Nissen's plea seems to hold many truths as we stand witness to the devastating damage from an unprecedented storm dubbed “Frankenstorm”.

With a need to put more pressure on global leaders to address the growing threat of climate change, more action is needed to act fast and act quickly. Climatologists and scientists say the window of opportunity is rapidly closing.

With Obama's words on climate change during his acceptance speech, a tiny flicker of hope has been stirred that maybe, just maybe, something can be done to avert a climate change mega-disaster.

And with the Pentagon stating that climate change is the number #1 threat to national security, perhaps a global consensus surpassing partisanship can take place – with saving humanity as the ultimate goal.

After all, the economy won’t matter if there are no people left to have jobs.

From an article posted earlier at Examiner.com - posted with the author's permission