Below, the average monthly volume data over the years with exponential trends added by Wipneus, incorporating the data for November 2012. 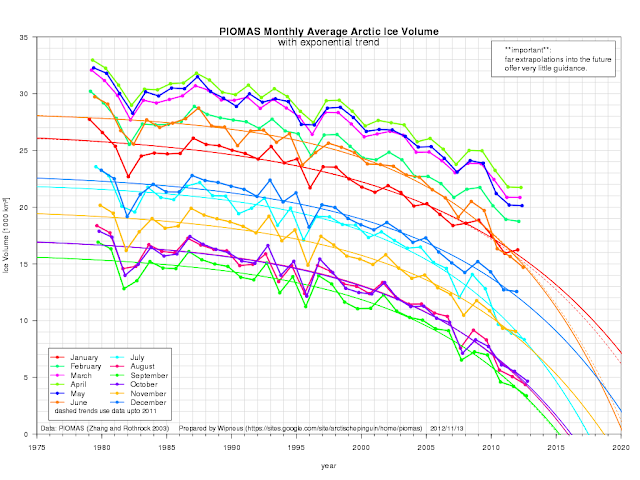 In November 2012, the average Arctic sea ice thickness over ice-covered regions fell below one meter, as illustrated by the image below.
As the sea ice gets thinner, the risk increases that the ice will break up. More open water makes the Arctic Ocean more prone to storms and associated feedbacks that can be expected to speed up such break up. Furthermore, they can push much of the ice into the Atlantic Ocean, leaving little ice in the Arctic Ocean to reflect sunlight back into space and to act as a buffer when temperatures start rising again the following year. For more on such feedbacks, see the post Diagram of Doom.

Professor Peter Wadhams warns in an article in Scientific American that the rate at which summer melting is outstripping accumulation of new ice in winter makes the entire ice cover likely to collapse by 2015. Less ice means that less sunlight will be reflected back into space; as a result, warming in the Arctic will accelerate dramatically. Because a third of the Arctic Ocean is composed of shallow shelf seas, surface warming will extend to the seabed, melt offshore permafrost and trigger the release of methane, which has a much greater greenhouse warming effect than CO2. A Russian-U.S. expedition led by Igor Semiletov has recently observed more than 200 sites off the coast of Siberia where methane is welling up from the seabed. Atmospheric measurements also show that methane levels are rising, most likely largely from Arctic emissions. To avoid the consequences of a collapse of summer ice, we need to bring back the ice we have lost. That will require more than merely slowing the pace of warming—we need to reverse it, Professor Wadhams adds.