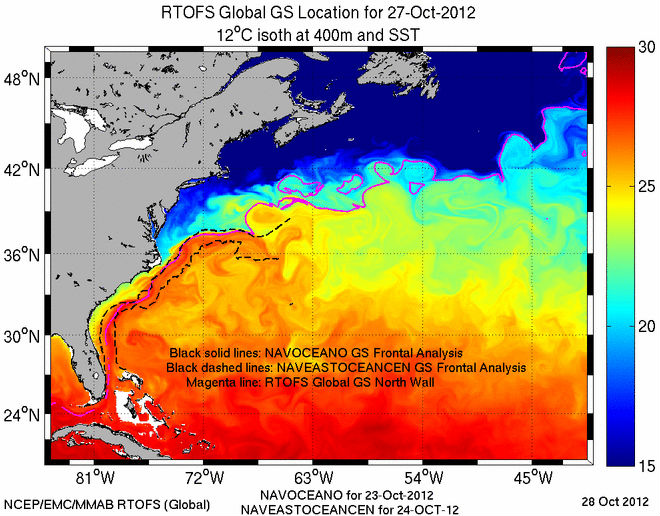 Phrampus & Hornbach (2012) have analyzed the stability of methane hydrates along the Carolina rise off the east coast of North America using active-source seismic reflection data, with the goal of characterizing hydrate stability below the Gulf Stream.

The study suggests that ocean warming above the Carolina rise, caused by a warming Gulf Stream, is rapidly destabilizing methane hydrate along a broad swathe of the North American margin.

The area of active hydrate destabilization covers at least 10,000 square kilometres of the United States eastern margin, and occurs in a region prone to kilometre-scale slope failures.

The image on the right shows the study area; the pink area is where methane hydrate is destabilizing owing to recent changes in ocean temperature; the approximate location of the Gulf stream is between the two solid black arrows.

Over the past 5,000 years or so, the western North Atlantic margin has been warming by up to eight degrees Celsius. This is now triggering the destabilization of an estimated 2.5 gigatonnes of methane hydrate. The analysis suggests that we are observing the onset of methane hydrate destabilization along an ~300-km span of the North American margin that will continue for centuries unless the Gulf Stream shifts southward or intermediate ocean temperatures cool several degrees.

If continuing hydrate destabilization triggers slope failure at this site, the amount of methane released could be an order of magnitude greater. Furthermore, recent studies have suggested that similar ocean temperature shifts are taking place elsewhere, notably in the Arctic Ocean; the estimate of 2.5 gigatonnes of destabilizing methane hydrate is therefore likely to represent only a fraction of the methane hydrate currently destabilizing globally. 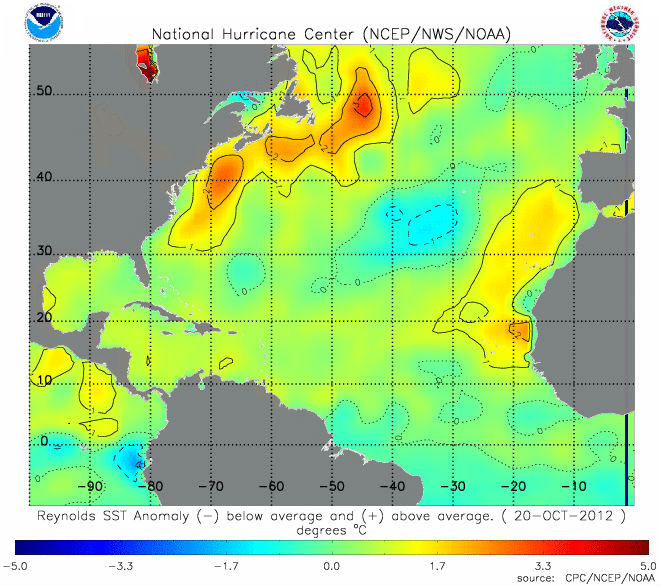 In many ways, the situation in the Arctic is even more dire than in the Carolina rise. A warming Gulf Stream will push warmer water into the Arctic, which has many areas with extremely shallow seas, giving methane little opportunity to be oxidized in the sea. Furthermore, colder water in the Arctic is less friendly toward microbes that can decompose methane in the water. Once methane does reach the atmosphere, there's little hydroxyl in the Arctic atmosphere to decompose the methane there.

Most importantly, the Arctic contains huge amounts of methane and the Arctic is experiencing huge temperature anomalies in summer, due to albedo changes and further feedbacks. Therefore, the Arctic looks set to experience huge abrupt releases of methane that will add to make the situation in the Arctic worse, in a vicious spiral threatening to escalate into runaway global warming.

- How extreme will it get?
arctic-news.blogspot.com/2012/07/how-extreme-will-it-get.html

- The potential impact of large abrupt release of methane in the Arctic
arcticmethane.blogspot.com/2012/05/potential-impact-of-large-abrupt.html

- Methane in the Arctic
arctic-news.blogspot.com/2012/05/video-and-poster-methane-in-arctic.html