Hurricane Sandy is moving inland and its impact is forecast to be felt as far away as in Toronto and Ottawa. 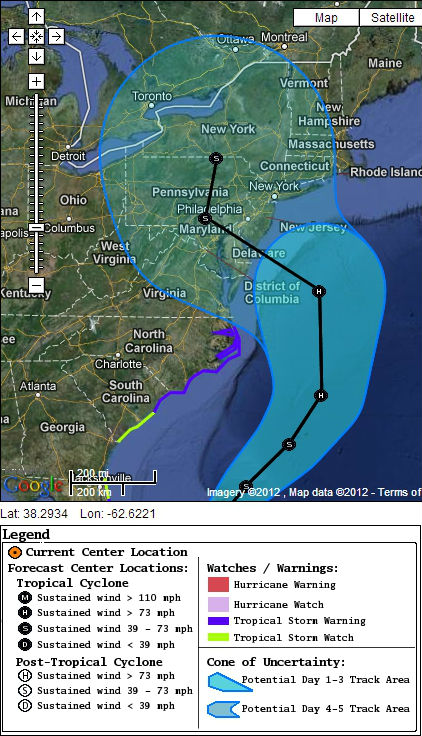 This prompted Paul Beckwith to make the following comments:

All storms veer to the right in the northern hemisphere due to the spinning of the earth (1 revolution per day). Except when there is a tilted high pressure region northward and it has to go left and there is a massive low pressure region left that sucks it there as well.

Why the high pressure ridge and massive low pressure? Because the jet stream is wavier and slower, a situation that is happening more and more often, because of massive sea ice decline this summer. Which is due to Arctic amplification feedbacks. Which in turn is due to rising greenhouse gases. Which is due to humans.

The situation is further illustrated by the image below, from ClimateCentral.

In an earlier post, Paul Beckwith described that a very rare cyclone churned up the entire Arctic region for over a week in early August 2012, destroying 20% of the ice area by breaking it into tiny chunks, melting it, or spitting it into the Atlantic. Cold fresh surface water from melted sea ice mixed with warm salty water from a 500 metre depth! Totally unexpected. A few more cyclones with similar intensity could have eliminated the entire remaining ice cover. Thankfully that didn't happen. What did happen was Hurricane Leslie tracked northward and passed over Iceland as a large storm. It barely missed the Arctic this time. Had the storm tracked 500 to 600 kilometres westward, Leslie would have churned up the west coast of Greenland and penetrated directly into the Arctic Ocean basin.
We dodged a bullet, at least this year. This luck will surely run out. What can we do about this? How about getting our politicians to listen to climatologists, for starters.

Below, rainfall forecast from the Hydrometereological Prediction Center of the National Weather Service - check the link for updates!