Two people have died in the wildfire in Colorado Springs, 347 homes have been destroyed and more than 35,000 people have been forced to evacuate their homes, in the most destructive wildfire in Colorado history, reports Reuters. The destruction surpassed the 257 homes destroyed recently by a large blaze north of Denver.
According the Wikipedia, the 2012 Colorado wildfires have now claimed 5 fatalities, over 600 homes have been destroyed and at least 202,425 acres have burned (i.e. 316.3 square miles or 819.2 square kilometers).
Below, a photo of the smoke cloud at Colorado Springs from the local Waldo Canyon fire, taken on June 26, 2012, by U.S. Air Force/Mike Kaplan. 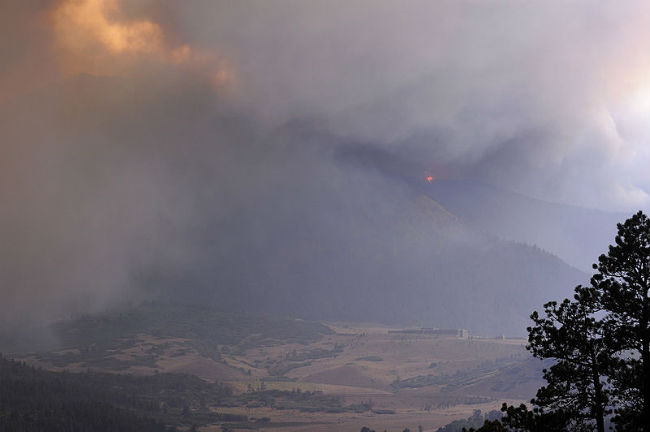 An AP news update at USAtoday includes:
• Idaho: A fast-moving 1,000-acre wildfire in eastern Idaho that destroyed 66 homes and 29 outbuildings was expected to be contained Saturday. Some 1,000 residents were evacuated.
• Utah: More than 50 houses were destroyed.
• Montana: Authorities in eastern Montana ordered the evacuation of several communities Saturday as the Ash Creek Complex fires, which has burned more than 70 homes this week, consumed another 72 square miles. The blaze grew to 244 square miles overnight.
• Wyoming: A wind-driven wildfire in a sparsely populated area of southeastern Wyoming exploded from eight square miles to nearly 58 square miles in a single day, and an unknown number of structures have burned. About 200 structures were considered threatened.

NASA has released a map, an edited version of which is below, showing the intensity and scope of the heat wave in the western United States, with temperature anomalies reaching 12 degrees Celsius in the period of June 17 to 24, 2012. Colorado experienced the brunt of the heat wave and had eight large wildfires burning on June 28, 2012. Wyoming and Utah—other states that have seen unusually hot weather—together had nine wildfires burning. 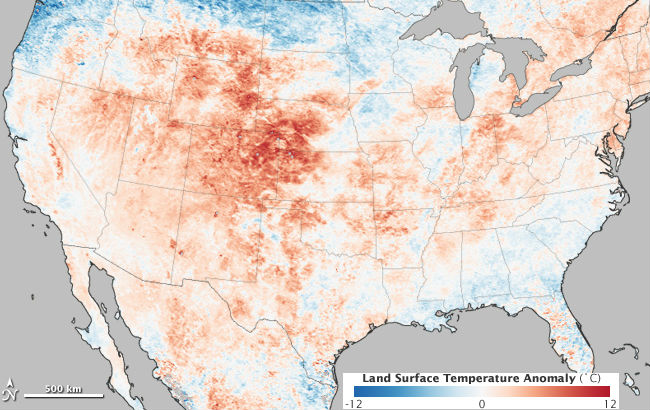 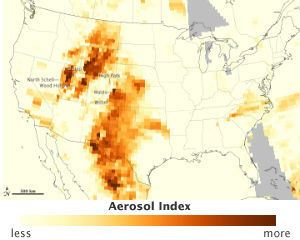 NASA adds that this heat wave, like all extreme weather events, has its direct cause in a complex set of atmospheric conditions that produce short-term weather. However, weather occurs within the broader context of the climate, and there’s a high level of agreement among scientists that global warming has made it more likely that heat waves of this magnitude will occur.
The image on the right, edited from another NASA image, depicts the relative concentration of aerosols in the skies above the continental United States on June 26, 2012.
As the image below shows, the heat wave is moving east, with temperatures reaching extremely high values over much of the United States. The image, edited from weather.gov, shows temperature predictions in both Celsius and Fahrenheit. 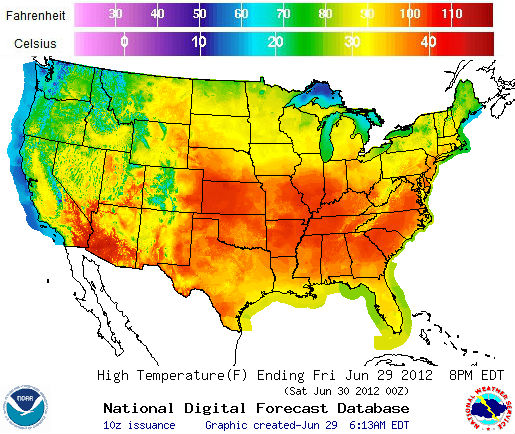 The image below, edited from NOAA, shows that temperatures are predicted to reach peaks on the East Coast of over 115 degrees Fahrenheit on Sunday, July 1st, 2012. 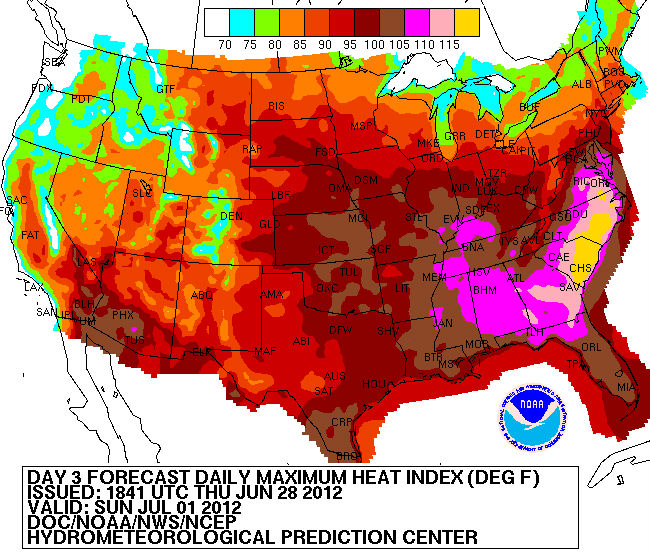 The United States isn't the only place witnessing extreme temperatures. Fires are raging in Russia, while I recently described the danger of abrupt local warming in the Arctic.
The NASA Global Fire Map below shows fires detected by satellite from June 9 to June 18, 2012.

The image below, from the Climate Emergency Institute, shows that most of the largest climate feedbacks take place at higher latitudes on the Northern Hemisphere. 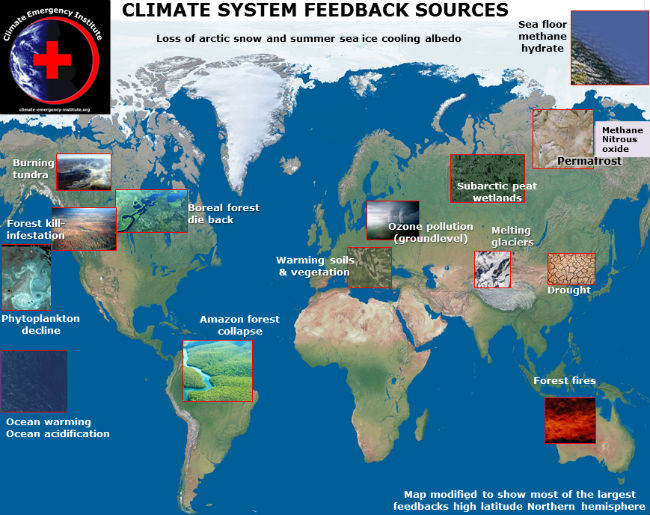