Abrupt climate change. It is happening today, big time. The northern hemisphere atmospheric circulation system is doing its own thing, without the guidance of a stable jet stream. The jet stream is fractured into meandering and stuck streaked segments, which are hoovering up water vapor and directing it day after day to unlucky localized regions, depositing months or seasons worth of rain in only a few days, turning these locales into water worlds and trashing all infrastructure like houses, roads, train tracks and pipelines. Creating massive sinkholes and catastrophic landslides. And climate change is only getting warmed up.

In the Arctic methane is coming out of the thawing permafrost. Both on land and under the ocean on the sea floor. The Yedoma permafrost in Siberia is now belching out methane at greatly accelerated rates due to intense warming. The collapsing sea ice in the Arctic Ocean is exposing the open ocean to greatly increased solar absorption and turbulent mixing from wave action due to persistent cyclonic activity. Massive cyclonic activity will trash large portions of the sea ice if positioned to export broken ice via the Fram Strait.

We have lost our stable climate

What does it all mean? There is no new normal? Far from it. We have lost our stable climate. Likely permanently. Rates of change are greatly exceeding anything in the paleorecords. By at least 10x, and more likely >30x. We are heading to a much warmer world. The transition will be brutal for civilization.

Can we avoid this? Stop it? Probably not? At least with climate reality being suppressed by corporations and their government employees. With their relentless push for more and more fossil fuel infrastructure and mining and drilling.

What else can we expect as we negotiate our abrupt transition in climate to a much warmer world?

Craziness, in a nutshell. Temperatures over land surfaces in the far north have been consistently over 25 C for weeks, due to persistent high pressure atmospheric blocks leading to clear skies and unblocked solar exposure. Water temperatures in rivers and streams in the far north have resulted in large fish kills as their ecological mortality thresholds have been exceeded. Many other regions are experiencing strange incidences of animal mortality. Mass migrations of animals towards the poles are occurring on land and sea, at startling rates, in an effort for more hospitable surroundings for survival. Shifting food source distributions is causing even hardier, less vulnerable species to be severely stressed. For example, dolphins are being stranded or dying, birds are dropping out of the sky, and new parasites and bacteria are proliferating with warmer temperatures.

In regions of the world undergoing severe droughts the vegetation and soils are drying and fires are exploding in size, frequency, and severity. Especially hard-hit are large regions of the US southwest, southern Europe, and large swaths of Asia. Who knows if forests that are leveled by fire will eventually be reforested; it all depends on what type of climate establishes in the region.

What about coastal regions around the world and sea levels? Not looking too good for the home team. In 2012 Greenland tossed off about 700 Gt (Gt=billion tons) of sea ice, from both melting and calving. As the ice melts it is darkening from concentrated contaminants being exposed, from much greater areas of low albedo meltwater pools, and from fresh deposits of black carbon ash from northern forest fires. Even more worrying are ominous signs of increasing movement. GPS sensor anchored to the 3 km thick glaciers hundreds of km from the coast are registering increased sliding. Meltwater moulins are chewing through the ice from the surface to the bedrock and are transporting heat downward, softening up the ice bonded to the bedrock and allowing sliding. Eventually, large chunks will slide into the ocean causing tsunamis and abrupt sea level rises. Many regions of the sea floor around Greenland are scarred from enormous calving episodes in the past.

On a positive note, this knowledge of our changing climate threat is filtering out to greater numbers of the slumbering public that has been brainwashed into lethargy by the protectors of the status quo. As more and more people see the trees dying in their back yards and their cities and houses and roads buckling under unrelenting torrential rains they are awaking to the threat. And there will be a threshold crossed and a tipping point reached in human behavior. An understanding of the reality of the risks we face. And finally global concerted action. To slash emissions. And change our ways. And retool our economies and reset our priorities. And not take our planet for granted. 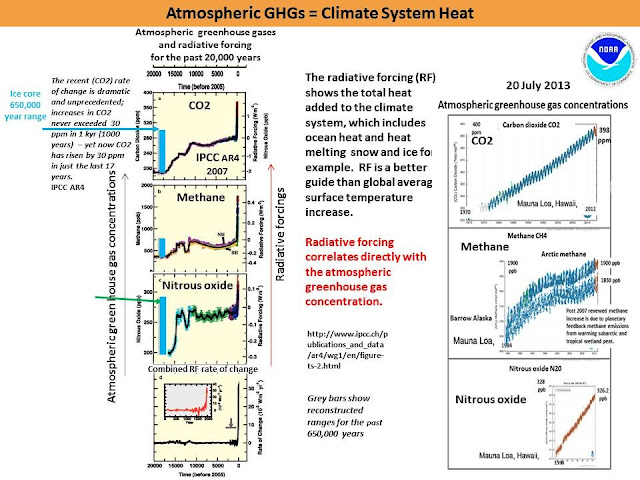 The above compilation of IPCC and NOAA images is by Peter Carter, who adds the following comment:

By definition this is abrupt heating. because atmospheric GHG concentration correlates directly with radiative forcing. CO2 is now 397 ppm and methane is now 1830 ppb ! It follows that the rate of ice being melted will also (as it looks) be unprecedented. The only force we have against mad fossil fuel pushing governments is accountability. They have to be made to face the full terrible consequences of their action on energy and inaction on climate. They are destroying the world.