The exclusion of climate science from COP meetings

There can be little doubt that, had the US, China and Russia been on the same page, an advanced agreement was likely to be reached at COP26, but since it is not, the collapse can be laid at the feet of human tribalism and eternal conflict since the dawn of civilization, ultimately leading to a mass extinction of species.

Climate scientists have practically been excluded from COP meetings, dominated as they are by economists, lawyers and politicians. To date no address has been made by leading climate scientists, including authorities such as James Hansen, Michael Mann, Joachim Schellnhuber, Will Steffen and other, leaving delegates and populations unaware of the ultimate consequences of global climate devastation.

With the exception of David Attenborough and references to “one minute to mid-night”, the science-based projections of global heating have only received faint echoes among the assembly of warring tribes at COP-26, dominated by nationalism, vested interests and sheer ignorance of the current trend, which can only culminate in the end of civilization.

The futility of making political decisions regarding future carbon emissions while continuing to grow fossil fuel industries is manifest (Figure 1).
The lessons from climate science indicate:
While neglecting the consequences of runaway global warming, discussions continue of the price of mitigation and adaptation, i.e. the price of habitability of Earth, proceeding to huggle in terms akin to corner store grocers. Elsewhere, much of the media appears to be preoccupied with the price of submarines, deadly weapons in futile wars, ironically more suitable for coastal surveys of regions flooded by an inevitable sea level rise on the scale of many meters. 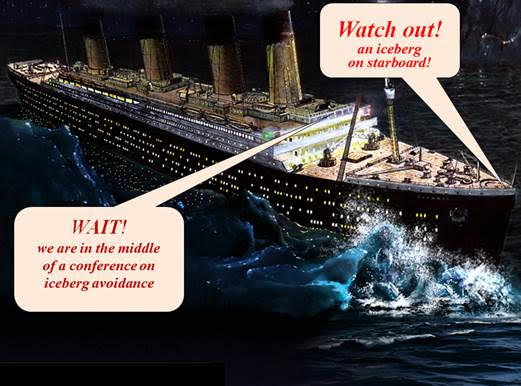