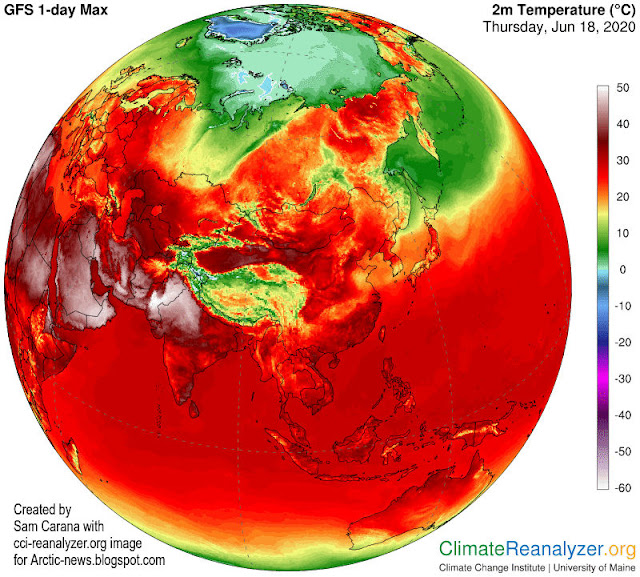 Very high temperatures hit Northern Europe and Eastern Siberia near the Arctic Ocean on June 18, 2020. This is a continuation of the heatwave that hit Siberia in May 2020. 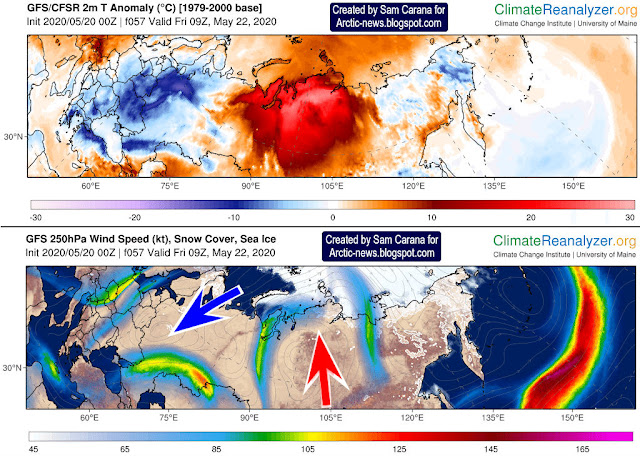 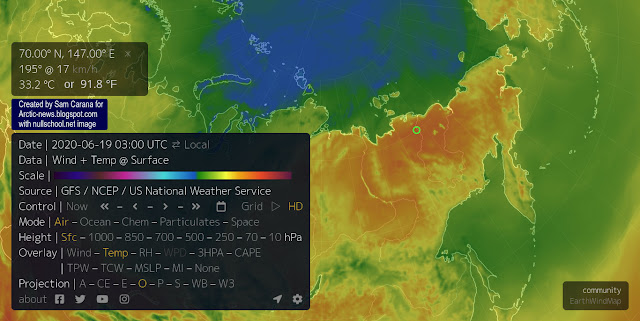 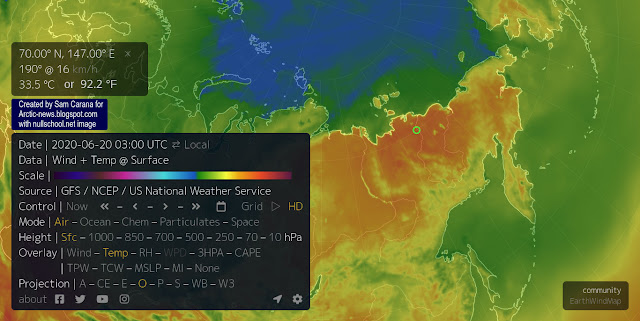 The image below is a forecast for June 23, 2020, showing how a distorted Jet Stream enables cold air to move down into Russia, while at the same time enabling hot air to move north over Scandinavia and Siberia, near the Arctic Ocean. 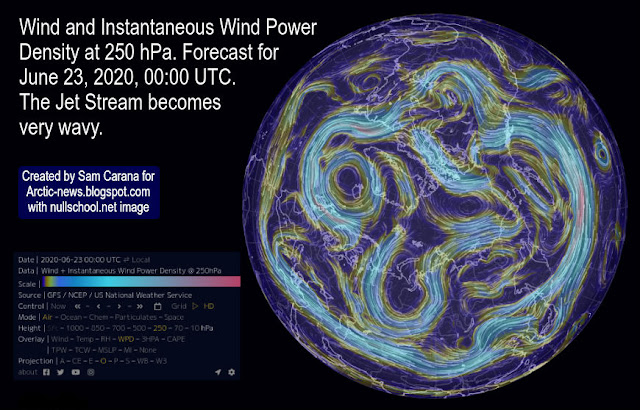 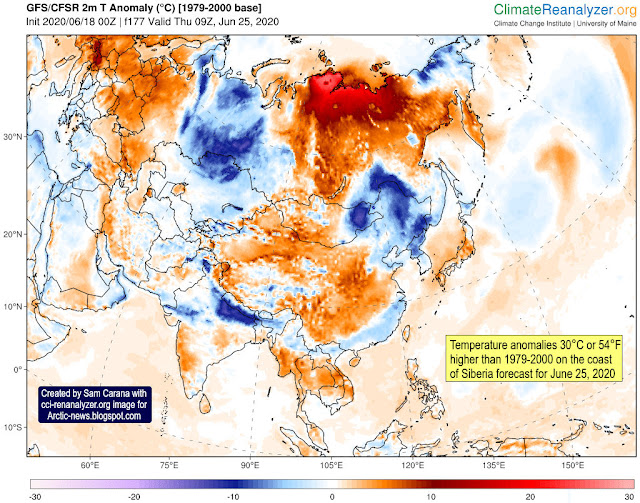 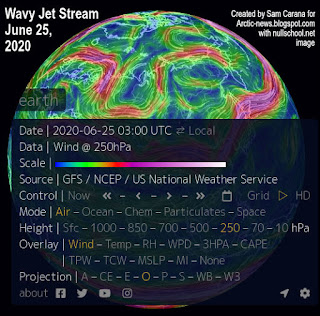 The image on the right is an update, showing how wavy the Jet Stream turned out to be on June 25, 2020.

This facilitates hot air getting carried north over Western Europe, East Siberia and through the Bering Strait, while cold air is moving south over the European part of Russia. Blocking patterns that prolong such a situation go hand in hand with a more wavy Jet Stream. 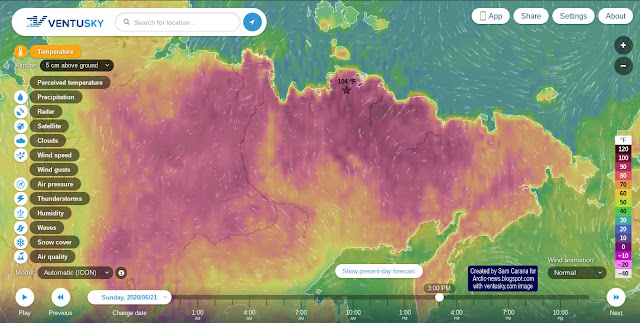 This indicates how much the soil of what once was permafrost is heating up. At 2 m above ground level, i.e. the default height for air temperature measurements, it was 30°C or 86°F, as the image below shows. The location marked by the star is at 71°28' North latitude and 142°59' East longitude, and at and altitude of 13 m. 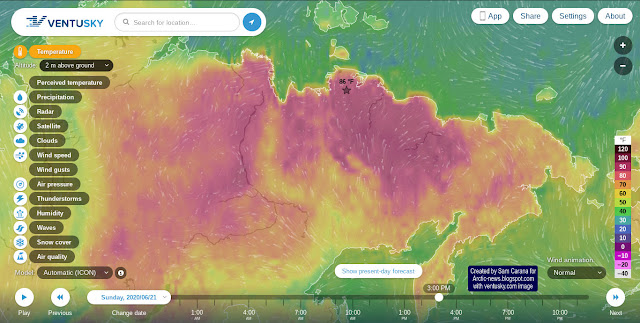 Both locations are well north of the Arctic Circle that - at 66°30′ N - constitutes the southern limit of the area within which, for one day or more each year, the Sun does not set (about June 21) or rise (about December 21). 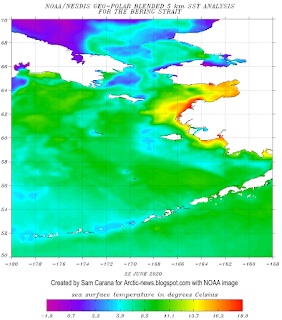 The heatwave is heating up the sea surface of the East Siberian Arctic Shelf (ESAS), as illustrated by above image. The ESAS is quite shallow, making that heat can quickly reach the seafloor.

Additionally, the heatwave is heating up rivers that carry large amounts of hot water into the Arctic Ocean. 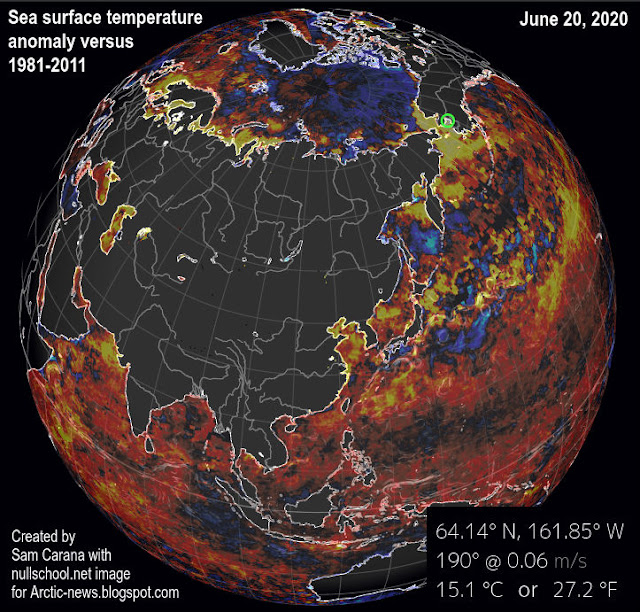 In summary, the Arctic Ocean is heating up in a number of ways: 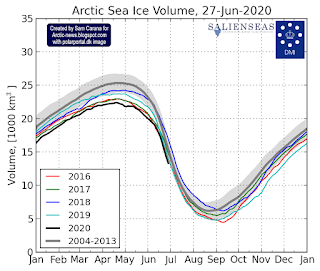 - The Siberian heatwave is heating up the sea surface of the ESAS.

- The heatwave is heating up rivers that carry large amounts of hot water into the Arctic Ocean.

- Numerous feedbacks can speed up the temperature rise, such as changes to the jet stream that can prolong heatwaves and make them more intense.

The rising temperatures result in record low Arctic sea ice volume, as illustrated by the image on the right and as also discussed in an earlier post.

As discussed in earlier posts such as this one, this heat threatens to destabilize methane hydrates contained in sediments at the seafloor of the Arctic Ocean. 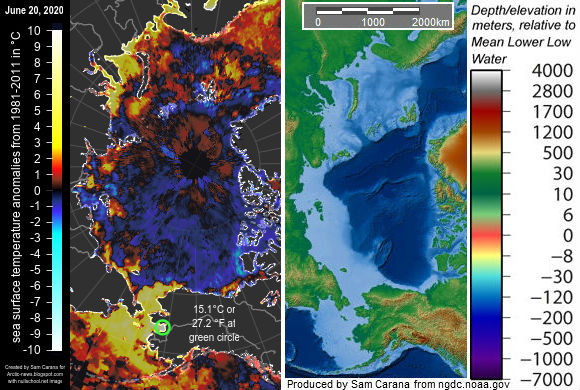 The bathymetry map in the right panel of above image shows how shallow seas in the Arctic Ocean can be. The water over the ESAS is quite shallow, making that the water can warm up very quickly during summer heat peaks and heat can reach the seafloor, which comes with the risk that heat will penetrate cracks in sediments at the seafloor. Melting of ice in such cracks can lead to abrupt destabilization of methane hydrates contained in sediments.

Large abrupt methane releases will quickly deplete the oxygen in shallow waters, making it harder for microbes to break down the methane, while methane rising through waters that are shallow can enter the atmosphere very quickly.

The situation is extremely dangerous, given the vast amounts of methane present in sediments in the ESAS, given the high global warming potential (GWP) of methane following release and given that over the Arctic there is very little hydroxyl in the air to break down the methane. 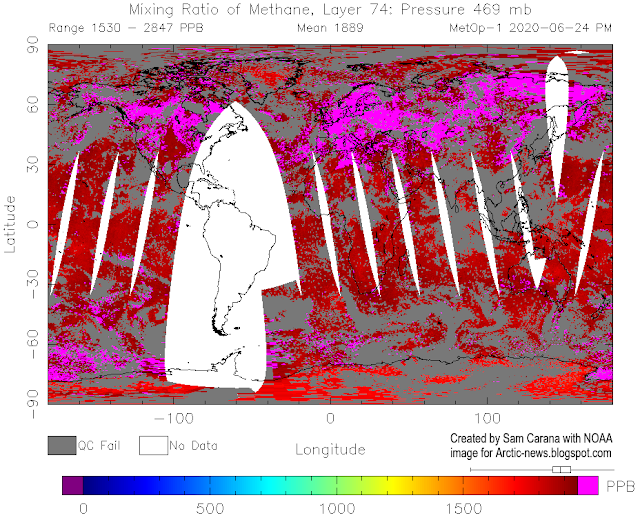 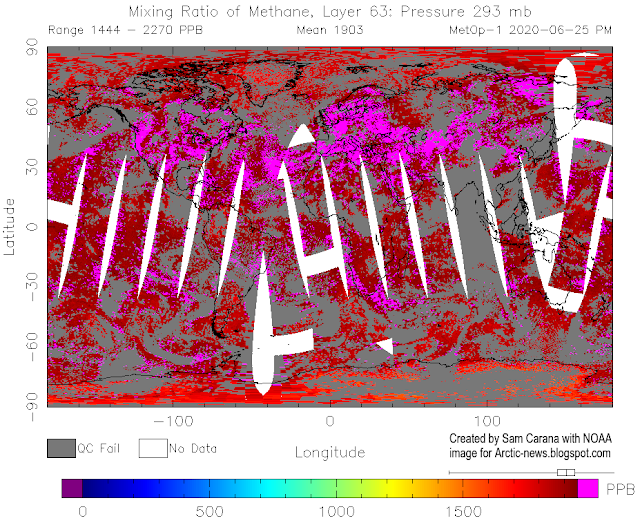 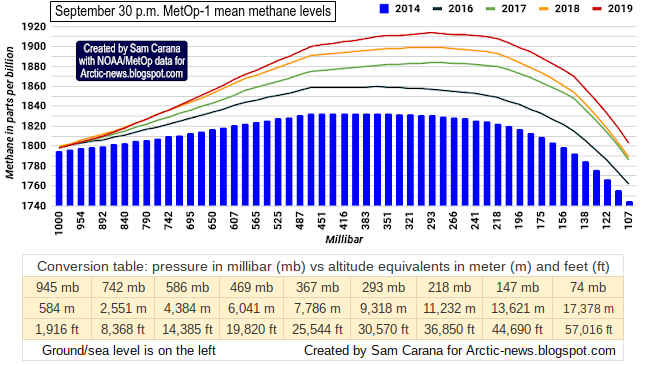 Above image shows that methane levels have risen most at higher altitude over the years. As discussed in an earlier post, methane eruptions from the Arctic Ocean can be missed by measuring stations that are located on land and that often take measurements at low altitude, thus missing the methane that rises in plumes from the Arctic Ocean. Since seafloor methane is rising in plumes, it hardly shows up on satellite images at lower altitude either, as the methane is very concentrated inside the area of the plume, while little or no increase in methane levels is taking place outside the plume. Since the plume will cover less than half the area of one pixel, such a plume doesn't show up well at low altitudes on satellite images.

Furthermore, the Siberian heatwave is also threatening to trigger forest fires that can cause huge amounts of emissions, including black carbon that can settle on the snow and ice cover, further speeding up its demise and causing albedo changes that result in a lot more heat getting absorbed in the Arctic, instead of getting reflected back into space as was previously the case. This is illustrated by the image below showing forest fires in East Siberia on June 19, 2020.

Finally, more intense forest fires threaten to cause organic carbon compounds to enter the stratosphere and damage the ozone layer, as discussed in an earlier post.