The changing face of planet Earth

The changing face of planet Earth

The inhabitants of planet Earth are in the process of destroying the habitability of their world through the perpetration of the largest mass extinction of species since 66 million years ago, when a large asteroid impacted Earth, and 55 million years since the Paleocene-Eocene Thermal Maximum (PETM) reaching 5–8°C. The late Holocene-Anthropocene climate change represents an unprecedented event, triggering a fast shift in climate zones and a series of extreme weather events, with consequences for much of nature and civilization. The changes are manifest where green forests are blackened by fire, droughts are turning grassy planes to brown semi-deserts, brilliant white snow and ice caps are melting into pale blue water and clear blue skies turn grey due to aerosols and jet contrails, most particularly in the northern hemisphere. Unless effective efforts are undertaken at CO₂ drawdown, the consequence would include demise of much of nature and a collapse of human civilization.

The transfer of hundreds of billions of tonnes of carbon from the Earth crust, the residues of ancient biospheres, to the atmosphere and oceans, condemning the bulk of life through the most extreme shift in the composition of the atmosphere and ocean Earth has experienced since 55 million years ago, with changes taking place in front of our eyes. Since the industrial revolution, about 375 billion tonnes of carbon (or 1,374 billion tonnes CO₂) have been emitted by humans into the atmosphere. The consequences are everywhere, from mega-droughts, to heat waves, fires, storms and floods. With atmospheric CO₂-equivalent rising above 500 ppm and mean temperatures by more than 1.5°C (Figure 1) look no further than the shift in climate zones, displayed for example on maps of the expanding wet tropical zones, drying sub-tropical latitudes and polar-ward migration of temperate climate zone. The ice sheets and sea ice are melting, huge fires overtake Siberia, the Sahara is shifting northward, large parts of southern Europe are suffering from droughts, heat waves and fires, the Kalahari Desert dunes are shifting and much of southern Australia is affected by warming and draughts. This is hardly compensated by a minor increase in precipitation and greening such as at the southern fringes of the Sahara Desert and parts of northern Australia.

As the globe warms, to date by a mean of near ~1.5 °C, or ~2.0°C when the masking effects of sulphur dioxide and other aerosols are considered, and by a mean of ~2.3°C in the polar regions, the expansion of warm tropical latitudes and the pole-ward migration of subtropical and temperate climate zones (Figure 2) ensue in large scale droughts such as parts of inland Australia and southern Africa. A similar trend is taking place in the northern hemisphere where the Sahara desert is expanding northward, with consequent heat waves across the Mediterranean and Europe.

In southern Africa “Widespread shifts in climate regimes are projected, of which the southern and eastern expansion of the hot desert and hot steppe zones is most prominent. From occupying 33.1 and 19.4 % of southern Africa under present-day climate, respectively, these regions are projected to occupy between 47.3 and 59.7 % (hot desert zone) and 24.9 and 29.9 % (hot steppe zone) of the region in a future world where the mean global temperature has increased by ~3°C.

Closely linked to the migration of climate zones is the southward drift of Antarctic- sourced cold moist fronts which sustain seasonal rain in south-west and southern Australia. A feedback loop has developed where deforestation and decline in vegetation in southern parts of the continent result in the rise of thermal plumes of dry air masses that deflect the western moist fronts further to the southeast. 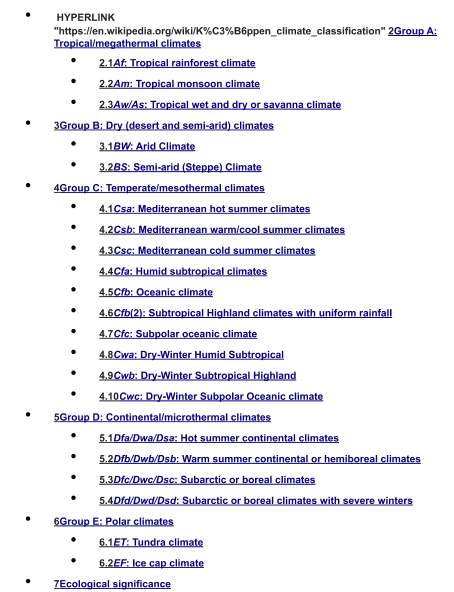 Since 1979 the planet’s tropics have been expanding pole-ward by 56 km to 111 km per decade in both hemispheres, leading one commentator to call this Earth’s bulging waistline. Future climate projections suggest this expansion is likely to continue, driven largely by human activities – most notably emissions of greenhouse gases and black carbon, as well as warming in the lower atmosphere and the oceans.”

An analysis of the origin of Australian droughts suggests, according to both observations and climate models, that at least part of this decline is associated with changes in large-scale atmospheric circulation, including shrinking polar ice and a pole-ward movement of polar-originated westerly wind spirals, as well as increasing atmospheric surface pressure and droughts over parts of southern Australia (Figure 3). Simulations of future climate with this model suggest amplified winter drying over most parts of southern Australia in the coming decades in response to changes in radiative forcing. The drying is most pronounced over southwest Australia, with total reductions in austral autumn and winter precipitation of approximately 40% by the late twenty-first century. Thus rainfall in southwestern Australia has declined sharply from about 1965 onward, concomitant with the sharp rise of global temperatures.

The consequences of the migration of climate zones are compounded by changes in flow patterns of major river systems around the world, for example in southern an southeastern Asia, including the Indus, Ganges, Brahmaputra and Mekong river basins, the home and bread basket for more than a billion people. With warming, as snow cover declines in the mountainous source regions of rivers, river flows are enhanced, with ensuing floods, in particular during the Monsoon. For example, in 2010 approximately one-fifth of Pakistan's total land area was affected by floods (Figure 4A), directly affecting about 20 million people, with a death toll close to 2,000. And about 700 people in cyclone Isai in Mozambique (Figure 4B, C). Such changes in climate and geography are enhanced once sea level rise increases from the scale of tens of centimeters, as at present, to meters, as predicted to take place later this and next century.

An increasing frequency and intensity of cyclones constitute an inevitable consequence of rising temperatures over warm low pressure cell tracks in tropical oceans, already affecting large populations in the Caribbean and west Pacific island chains, encroaching into continental coastal zones, China, southeast USA, southeast Africa, India, northern Australia, the Pacific islands. According to Sobel et al. (2016) “We thus expect tropical cyclone intensities to increase with warming, both on average and at the high end of the scale, so that the strongest future storms will exceed the strength of any in the past”. Likewise increasing temperatures, heat waves and droughts, compounded by deforestation over continents, constitute an inevitable consequence of heat waves and droughts. A prime example is the Siberian forest fires (Figure 5B), covering an area larger than Denmark and contributing significantly to climate change. Since the beginning of the year a total of 13.1 million hectares has burned. Total losses from natural catastrophes on 2018 stated as US$160 billion.

Last but not least, major changes in the Polar Regions are driving climate events in the rest of the globe. According to NOAA Arctic surface air temperatures continued to warm at twice the rate of the rest of the globe, leading to major thaw at the fringes of the Arctic (Figure 6A) and a loss of 95 percent of its oldest ice over the past three decades. Arctic air temperatures during 2014-18 since 1900 have exceeded all previous records and are driving broad changes in the environmental system both within the Arctic as well as through the weakening of the jet stream which separates the Arctic from warmer climate zones. The recent freezing storms in North America represent penetration of cold air masses through an increasingly undulating jet stream barrier, as well as allowing warm air masses to move northward, further warming the Arctic and driving further ice melting (Figure 6B).

According to Rignot et al. (2011) in 2006 the Greenland and Antarctic ice sheets experienced a combined mass loss of 475 ± 158 billion tons of ice per year. IPCC models of future climate change contain a number of departures from the paleoclimate evidence, including the major role of feedbacks from land and water, estimates of future ice melt, sea level rise rates, methane release rates, the role of fires in enhancing atmospheric CO₂, and the already observed onset of transient freeze events consequent on the flow of ice melt water into the oceans. Ice mass loss would raise sea level on the scale of meters and eventually tens of meters (Hansen et al. 2016). The development of large cold water pools south and east of Greenland (Rahmstorf et al. 2015) and at the fringe of West Antarctica, signify early stages in the development of a North Atlantic freeze, consistent with the decline in the Atlantic Meridional Ocean Circulation (AMOC). As the Earth warms the increase in temperature contrasts across the globe, in particular between warming continental regions and cooling ocean regions, leads to storminess and extreme weather events, which need to be taken into account when planning adaptation measures, including preparation of coastal defenses, construction of channel and pipelines from heavy precipitation zones to drought zones.

None of the evidence and projections summarized above appears to form a priority consideration on the part of those in power—in parliaments, in corporations, among the wealthy elites and vested interests. Having to all intents and purposes given up on the habitability of large parts of the Earth and on the survival of numerous species and future generations—their actions and inactions constitute the ultimate crime against life on Earth.

Books:
The Archaean: Geological and Geochemical Windows into the Early Earth

Added below is a video with an August 6, 2019, interview of Andrew Glikson by Guy McPherson and Kevin Hester, as edited by Tim Bob.