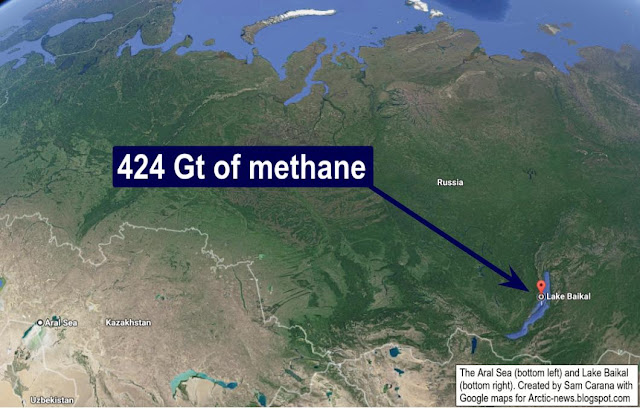 If the water level in Lake Baikal were to fall, the pressure on the methane hydrates would decrease, resulting in huge methane eruptions, dwarfing the amount of methane currently in the atmosphere.

What are the chances that water levels in Lake Baikal will fall in future? The above animation shows the fate of the Aral Sea, further to the west in Asia (also on the map at top). The Aral Sea virtually disappeared over the course of the last few decades. Some people point at climate change as the cause. More people point at irrigation by farmers.

Further decline of Arctic sea ice is likely to push up temperatures across Russia. The image below shows that temperatures as high as 36.6°C or 97.8°F were forecast for June 13, 2016, over the Yenisei River in Siberia that ends in the Arctic Ocean.
Even higher temperatures were recorded in 2015 at a location in Siberia well within the Arctic Circle.

Demands for water could increase even more dramatically due to wildfires and the need to fight such fires. The image below shows that on June 23, 2016, wildfires north of Lake Baikal caused emissions as high as 22,953 ppb CO and 549 ppm CO₂ at the location marked by the green circle.