John Davies comments:
This was the warmest August on record, primarily due to very high Sea Surface Temperatures in the Northern Hemisphere.

There is no El Nino event in this period, but some sort of event - hopefully an event not a climate shift - is taking place. If this is an event, the situation will become more normal when it ends, which will be in less than a years time at worst. If it is a climate shift, we are in desperate trouble, though I think it is an event.

The drought affecting California and the whole of the west of North America, Central America, and large parts of the Brazilian rainforest, though preceding this event was almost certainly down to changes which started before this event but ultimately caused it.

Despite the record high combined average temperature across global land and ocean surfaces for August, the global economy will continue as normal and no specific action can be expected to be taken to curb emissions. This will change, if global temperatures continue to rise. Temperatures are high enough to cause global concern, however. More later.

Note: NOAA's most recent (Sep 4, 2014) prediction puts the chance of El Niño at 60-65% during the Northern Hemisphere fall and winter. 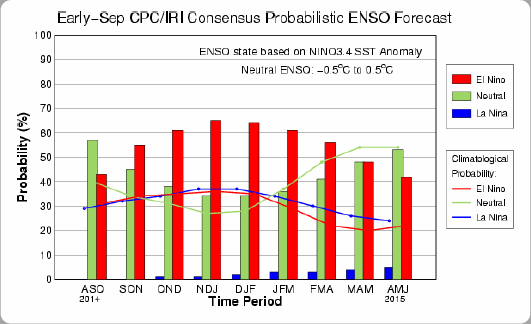 Sea surface temperatures (SST) can be expected to remain high in the Arctic Ocean, as SST anomalies are high in the North Atlantic (+1.65°C, image left) and high temperatures are forecast over the Arctic for at least the next seven days (anomalies as high as +2.87°C, image right). For a comparison with October 3 temperatures, see this earlier post.

Additionally, an increasing amount of heat has been going into the deeper parts of the ocean, and the Gulf Stream will for month to come continue to transport water into the Arctic Ocean, and this water will be warmer than the water already there, threatening to unleash ever larger eruptions of methane from the seafloor of the Arctic Ocean, as discussed in this earlier post.