Methane levels as high as 2562 ppb were recorded on October 9, 2014, as illustrated by the image below. 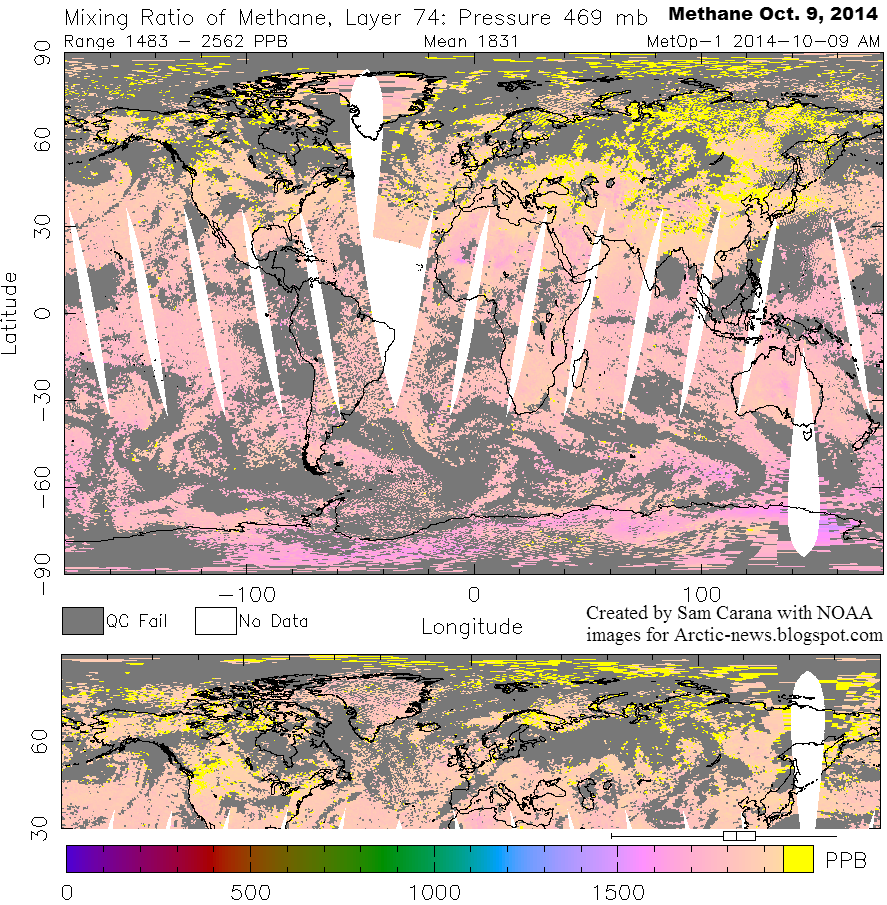 Many grey areas show up in the image where QC (quality control) failed, as it was too hard to read methane levels in the respective area, apparently due to high moisture levels (i.e. snow, rain or water vapor) in the atmosphere.

As above image illustrates, cloud cover is high over the Arctic, while there is also precipatation in the form of snowfall. 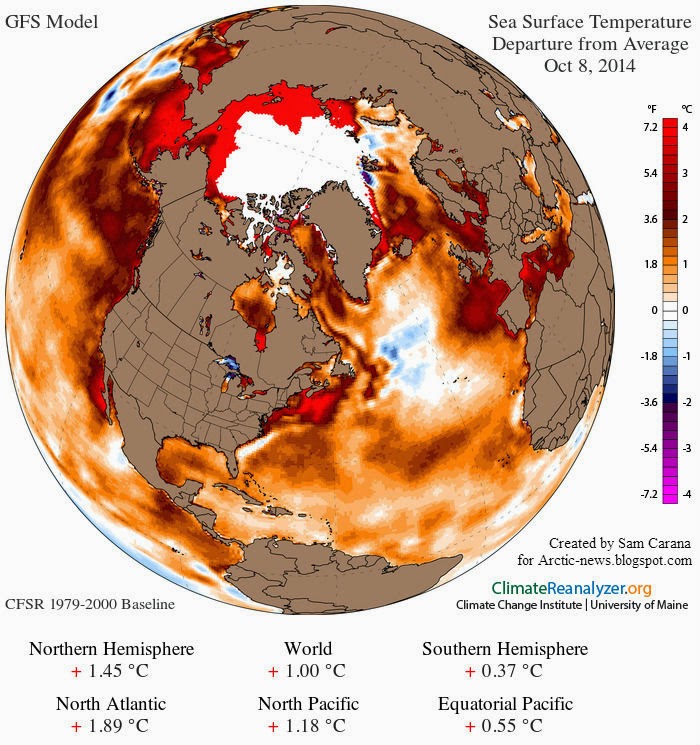 In other words, high levels of methane (above 1950 ppb, colored yellow) could be present over a much larger part of the Arctic Ocean, while methane in these grey areas could be even higher than the measured peak level of 2456 ppb.

This appears to be confirmed by persistent high methane levels over vast areas across the Arctic Ocean both in the morning (top part of the image further above) and in the afternoon (bottom part of image) on 9 October 2014.

Methane levels are this high over the Arctic Ocean for the number of reasons, including: 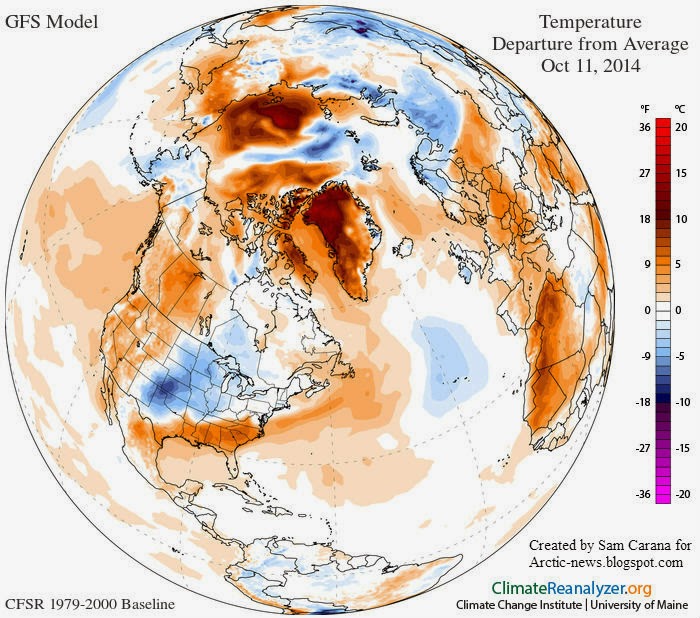 Here's an example of intense warming. Look at what is currently happening on Greenland.

As the image above right shows, sea surface temperature anomalies as high as +1.89°C hit the North Atlantic (on October 8, 2014).
Furthermore, high cloud cover over the Arctic (image further above) makes it hard for the heat there to radiate out into space, further contributing to high temperature anomalies.

The image on the right shows high temperature anomalies over Greenland and parts of the Arctic Ocean on October 11, 2014. Note that anomalies are averaged out over the course of the day (and night).

The image below (right) shows anomalies at the top end of the scale hitting large parts of Greenland at a specific time during this day. The left part of the image below shows how this could happen, i.e. jet streams curling around Greenland trapping warm air inflow from the North Atlantic.

As said, as the Arctic warms up more rapidly than the rest of Earth, the speed at which jet streams circumnavigate the Northern Hemisphere will weaken, making the jets meander more and creating patterns that can trap heat (or cold) for a number of days over a given area. Due to the height of its mountains, Greenland is particularly prone to be increasingly hit by heatwaves resulting from such blocking patterns. Warming changes the texture of snow and ice, making it more slushy and darker, which also makes that it absorbs more of the sunlight's heat, further accelerating melting.

As Paul Beckwith warns in an earlier post, melt rates on Greenland have doubled in the last 4 to 5 years, and melt rates on the Antarctica Peninsula have increased even faster. Based on the last several decades, melt rates have had a doubling period of around 7 years or so. If this trend continues, we can expect a sea level rise approaching 7 meters by 2070.

These are all indications that the pace of climate change is accelerating in many ways, the most dangerous one being ever larger methane eruptions from the Arctic Ocean's seafloor. As the image below shows, sea surface temperature anomalies are very high in the Arctic Ocean, indicating very high temperatures under the surface. 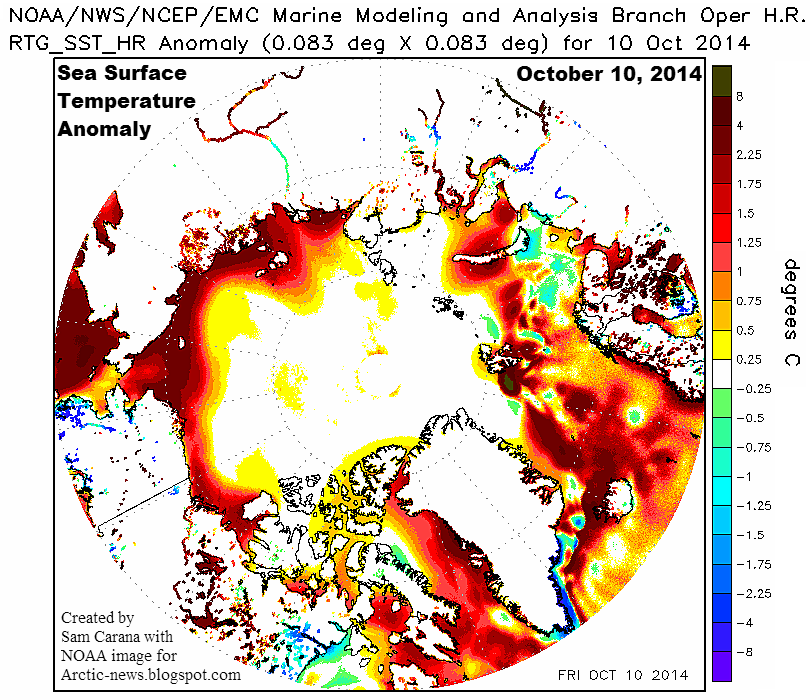 U.S. Secretary of State John Kerry recently said: “There are now – right now – serious food shortages taking place in places like Central America because regions are battling the worst droughts in decades, not 100-year events in terms of floods, in terms of fires, in terms of droughts – 500-year events, something unheard of in our measurement of weather.” Warning about looming catastrophe, Kerry adds: “Life as you know it on Earth ends. Seven degrees increase Fahrenheit (3.9°C), and we can't sustain crops, water, life under those circumstances.”