Methane buildup in the atmosphere

Levels of carbon dioxide (CO2) in the atmosphere are now firmly above the 400 parts per million (ppm) level, as illustrated by the graph below, from keelingcurve.ucsd.edu. 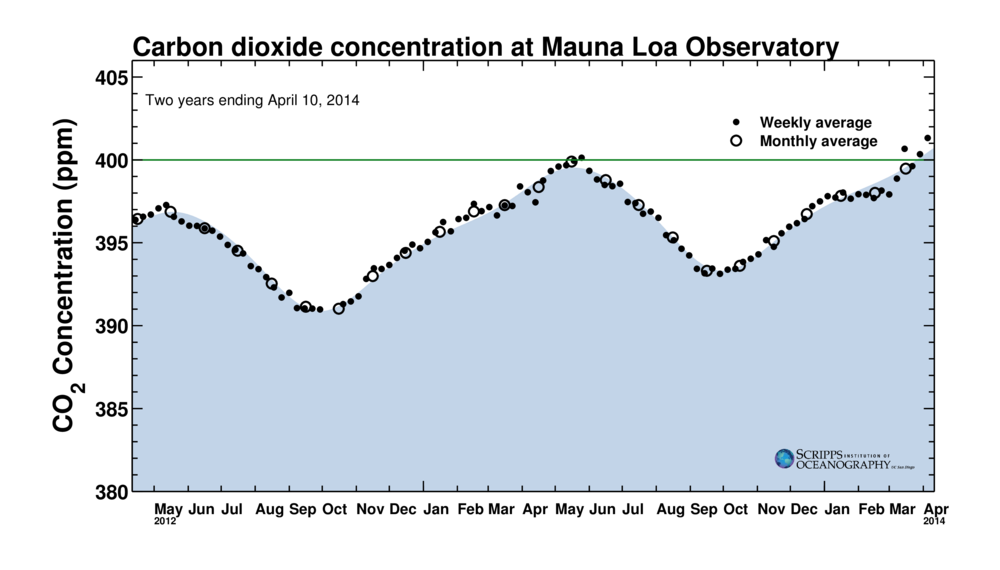 As above graph shows, levels of CO2 go up and down with the seasons. Even higher levels are expected to be reached in May 2014. Importantly, 400 ppm is 143% its pre-industrial peak levels of 280 ppm.

Levels of methane (CH4) in the atmosphere are rising even faster. According to IPCC AR5, methane levels were 1798 ppb in 2010 and 1803 ppb for 2011. A graph included in an earlier post shows historic levels of CH4, CO2 and N2O levels, highlighting methane's steep rise (now some 250% its pre-industrial level). The graph below, based on a plot by NOAA, shows the rise of methane over the past few decades and also shows that methane levels similarly go up and down with the seasons. 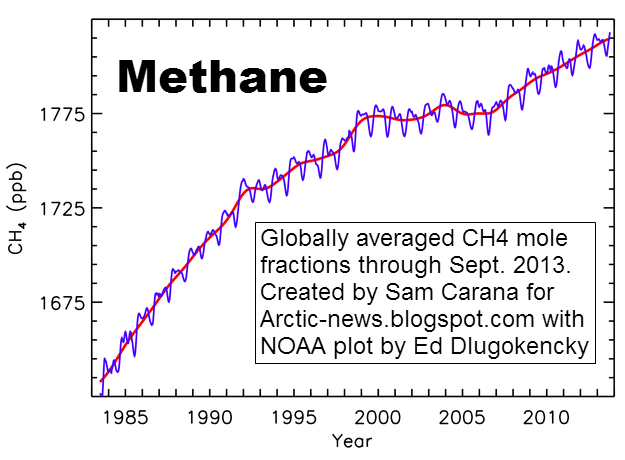 Globally, IPCC/NOAA figures suggest that abundance of methane in the atmosphere did reach 1814 ppb in 2013 and is rising with some 5 to 6 ppb annually. IASI data show that - at the hight of the northern summer, in August 2013 - mean methane levels rose strongly, to levels well above 1800 ppb, as also discussed in posts such as this one. 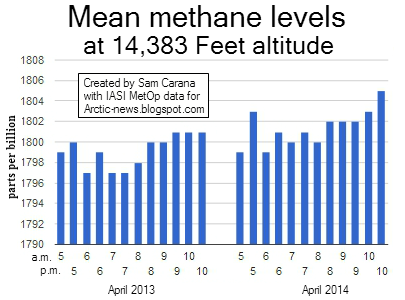 Next to seasonal variations, methane levels also differ depending on altitude. Often, when mean methane values are given, readings at 14,383 feet altitude are used, as methane typically reaches its highest levels at this altitude.

The image on the right compares methane levels for 2013 and 2014 at this altitude over six recent days, with a.m readings and p.m. readings for each day.

Around this time of year in 2013, as the graph shows, methane levels went through the 1800 ppb mark. The same thing occurred this year, while levels have meanwhile increased with a few ppb, so at first glance methane's rise appears to continue as anticipated by the IPCC.

While the above is very worrying, the situation may be even more dire than this. The graph below compares methane levels in 2013 and in 2014, averaged over the same six-day period (April 5 through to April 10) and at six different altitudes.

Above image indicates that, while the difference between 2013 and 2014 at lower altitudes (8,367 feet and 14,383 feet) may seem relatively small, increases at higher altitudes may be much stronger. In other words, rather than rising in a similar way across all altitudes, methane may in fact be building up much more strongly at higher altitudes.

This frightening possibility was raised a few times at this blog, such as in the altitude analysis in January 2014 and in the post Quantifying Arctic Methane, which noted that IPCC-estimates of global methane levels may rely too much on low-altitude data collected over the past few decades. Indeed, the total methane burden may already be rising much more rapidly than the IPCC is anticipating, also because methane is rising in the atmosphere, increasing the burden especially at higher altitudes, as evidenced by increasing occurence of noctilucent clouds.


The above analysis uses a limited dataset, just like the previous one, but if verified by further analysis, it could be that a dramatic rise in the presence of methane in the atmosphere is occuring without showing up at lower altitudes. This could also explain how earlier releases of methane from hydrates could have been ignored by many, i.e. relatively small increases in methane levels at relatively low altitudes may have given a false reassurance that such releases were not adding much methane to the atmosphere. Further analysis, comparing satellite data at different altitudes over the years, could give more clarity on these points.