The March 2014 Arctic sea ice volume, as calculated by the Pan-Arctic Ice Ocean Modeling and Assimilation System (PIOMAS) at the Polar Science Center, was the 2nd lowest on record at 21.818 km³. Only March 2011 had a lower volume, at 21.421 km³, as illustrated by the graph below, by Wipneus. 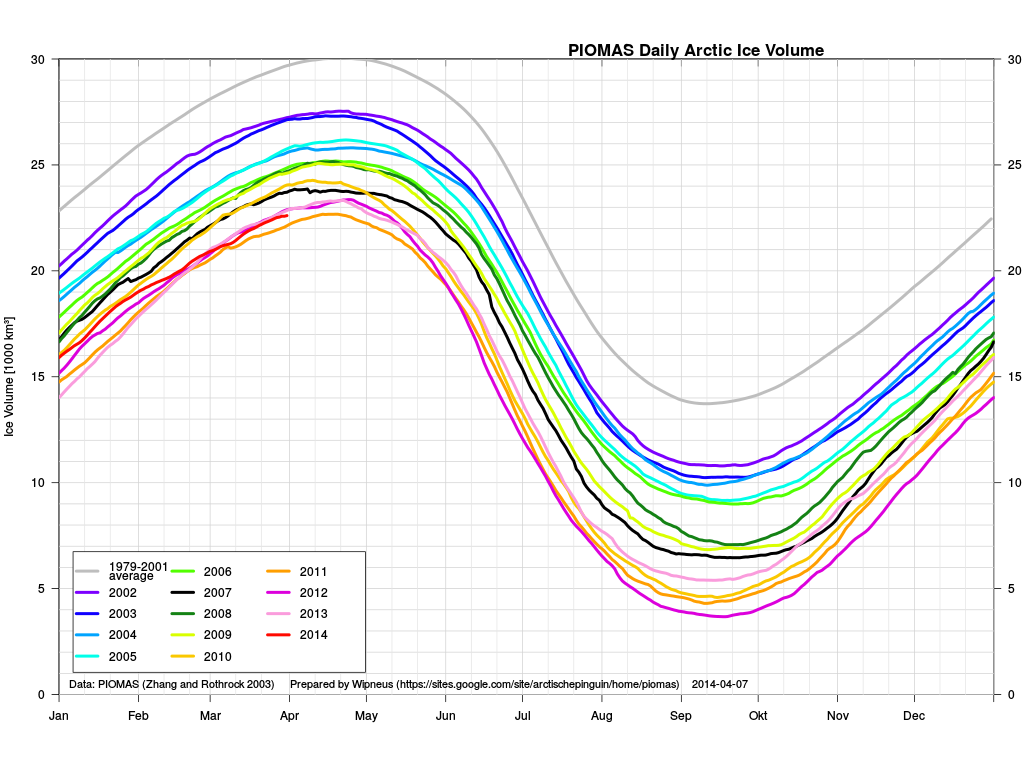 Another way of depicting the continued fall of the sea ice volume is the Arctic Death Spiral below, by Andy Lee Robinson. 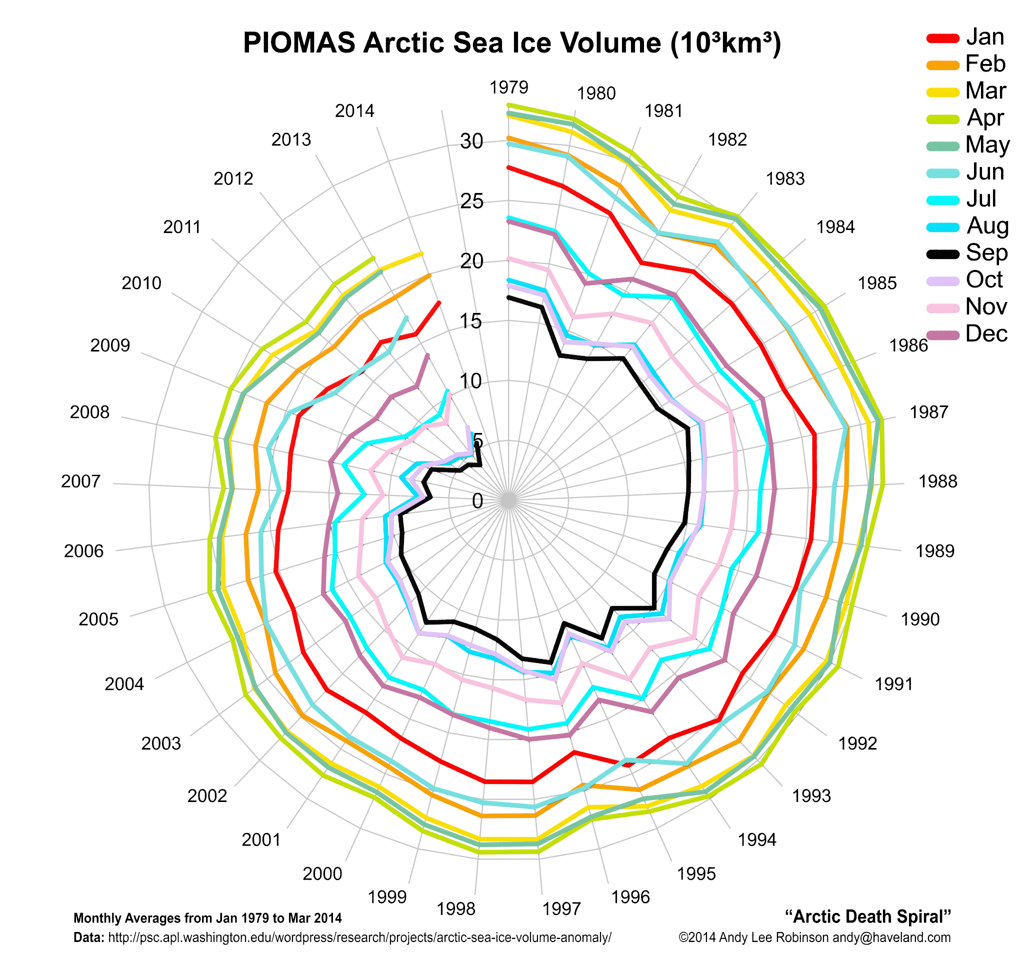 This puts the sea ice in a very weak position. This month, the sea ice will reach its highest volume, which may well be the lowest volume on record for April. The Naval Reserach Laboratory 30-day animation below shows recent sea ice thickness.

The lowest sea ice volume for 2014 is expected to be reached in September, and - given the shape the ice is in now - will likely be one of the lowest minima on record. In fact, there is a chance that there will be no ice left whatsoever later this year. As illustrated by the image below, again by Wipneus, an exponential curve based on annual minima from 1979 points at zero ice volume end 2016, with the lower limit of the 95% confidence interval pointing at zero ice end of 2014. 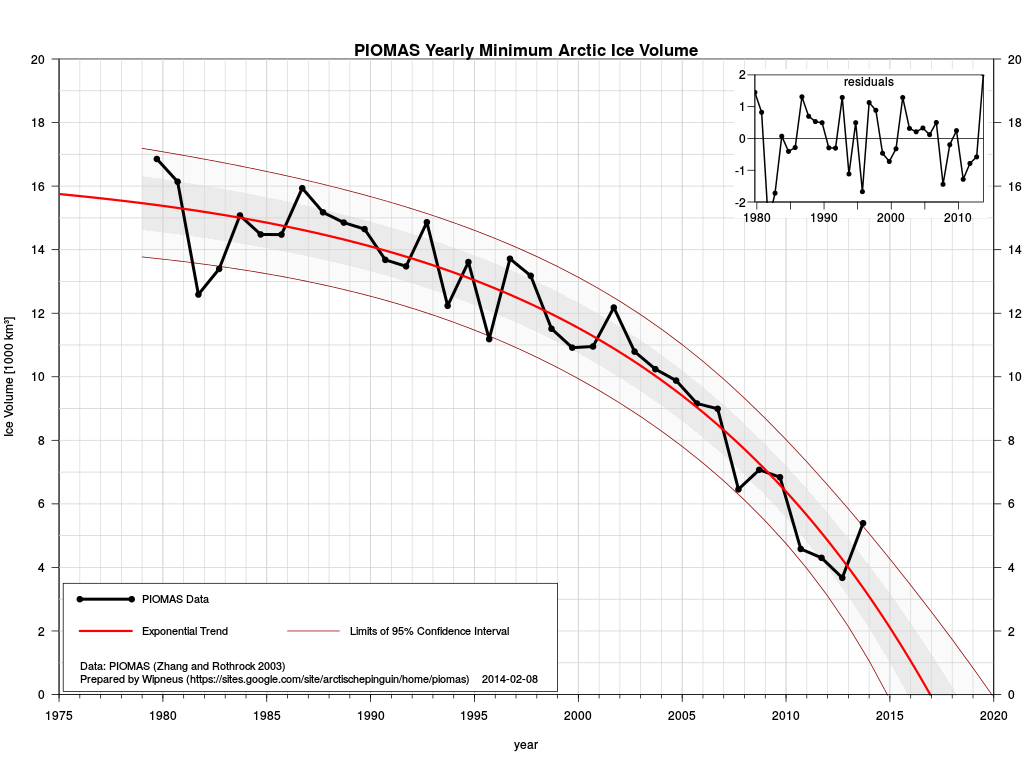 Absence of sea ice will mean that a lot of more heat will be absorbed by the Arctic Ocean.

As NSIDC.org describes, sea ice reflects 50% to 70% of the incoming energy, but thick sea ice covered with snow reflects as much as 90% of the incoming solar radiation. After the snow begins to melt, and because shallow melt ponds have an albedo of approximately 0.2 to 0.4, the surface albedo drops to about 0.75. As melt ponds grow and deepen, the surface albedo can drop to 0.15. The ocean reflects only 6% of the incoming solar radiation and absorbs the rest. Furthermore, all the heat that during the melt went into transforming ice into water will - in the absence of ice - be absorbed by the ocean as well. 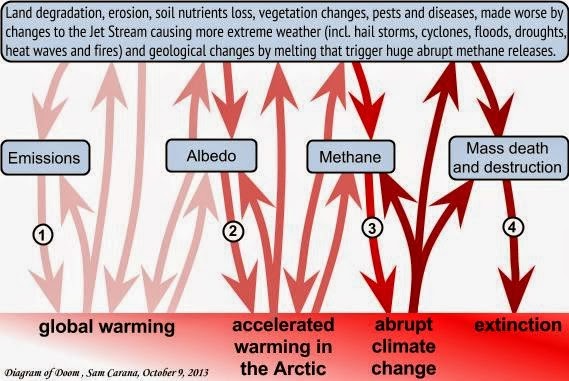 Such feedbacks are causing warming to accelerate in the Arctic Ocean, much of which is very shallow and thus vulnerable to warming. The Gulf Stream can be expected to keep carrying warmer water into the Arctic Ocean. Extreme weather events such as heatwaves and cyclones could make the situation a lot worse.

Warming of the Arctic Ocean threatens to destabilize huge amounts of methane held in sediments at the seafloor, in the form of free gas and hydrates. The danger is that release of methane from the seafloor of the Arctic Ocean will warm up the Arctic even further, triggering even more methane releases, as well as heatwaves, wildfires and further feedbacks, in a spiral of runaway warming that will lead to starvation, destruction and extintion at massive scale across the globe.