Sea Ice in decline between Svalbard and Greenland

The top right inset shows sea ice thickness, illustrating that methane is escaping from the sea floor of the Arctic Ocean and is transported by currents to the thinner edges of the sea ice, where it is entering the atmosphere.

As discussed in a recent post, methane can be bubbling up in the Arctic Ocean with a force strong enough to prevent sea ice from forming in the area. This feedback is depicted in the Diagram of Doom further below as feedback #13. 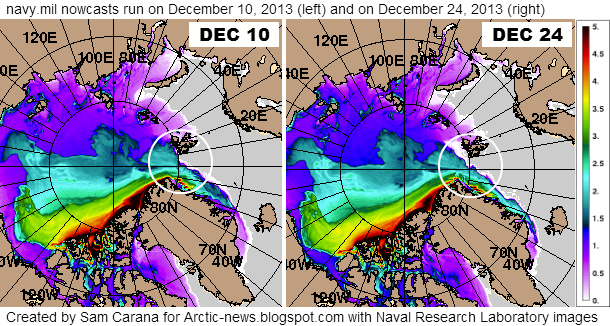 Around this time of year, Arctic sea ice is typically growing rapidly, both in extent and thickness.

However, the above image shows that in the area marked by the white circle, between Svalbard and Greenland, the sea ice is actually in decline.

This decline is caused by methane that is entering the atmosphere in the area as warmer water continues to be transported by the Gulf Stream into the Arctic Ocean, as discussed in previous posts such as this one, and as also illustrated by the image on the right.

Warmer than average waters have been entering the Arctic Ocean along the Gulf Stream since July 2013, when changes to the Jet Stream contributed to waters off the North American coast reaching record warmest temperatures, as depicted in the Diagram of Doom below as feedback #11.

In summary, the above images show that methane makes it hard for ice to form, while the warm water of the West Spitzbergen Current is pushing the ice away, breaking up even the thickest ice to the north of Greenland.

Surface temperatures in the area have been extremely high recently. This part of the Arctic Ocean was hit by an 18+°C anomaly during the week from December 16 to December 22, 2013, as illustrated by the image below. 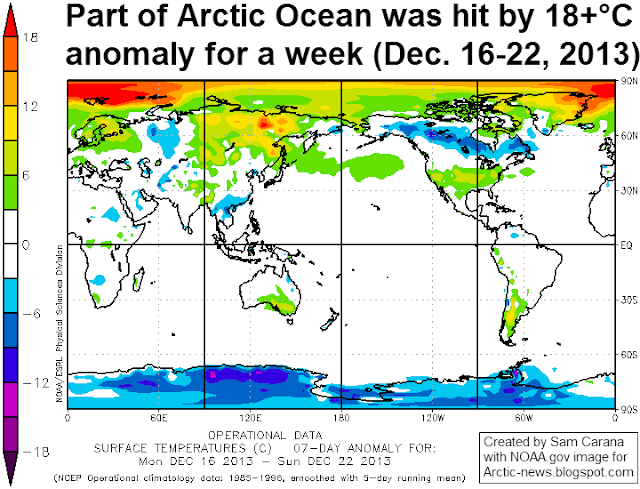 On some days that week, anomalies of 20+°C were recorded over an even larger part of the Arctic Ocean, as described in a previous post. These anomalies show how a number of feedbacks can interact and contribute to huge warming peaks in the Arctic Ocean, such as methane releases (feedbacks #2 and #13 in the diagram below) and changes to the Jet Stream (feedbacks #10 and #11 in the diagram below).

This spells bad news for the sea ice. Some people may have hoped that the thicker sea ice north of Greenland would take decades to disappear. However, as depicted in the Diagram of Doom below, feedbacks can hugely accelerate sea ice decline. As sea ice declines further, more open water make it more likely that stronger storms and cyclones will appear that can rip the sea ice apart and move the pieces into the Atlantic Ocean in a matter of days.

The image below, by Jim Pettit, illustrates the ongoing decline of the sea ice. 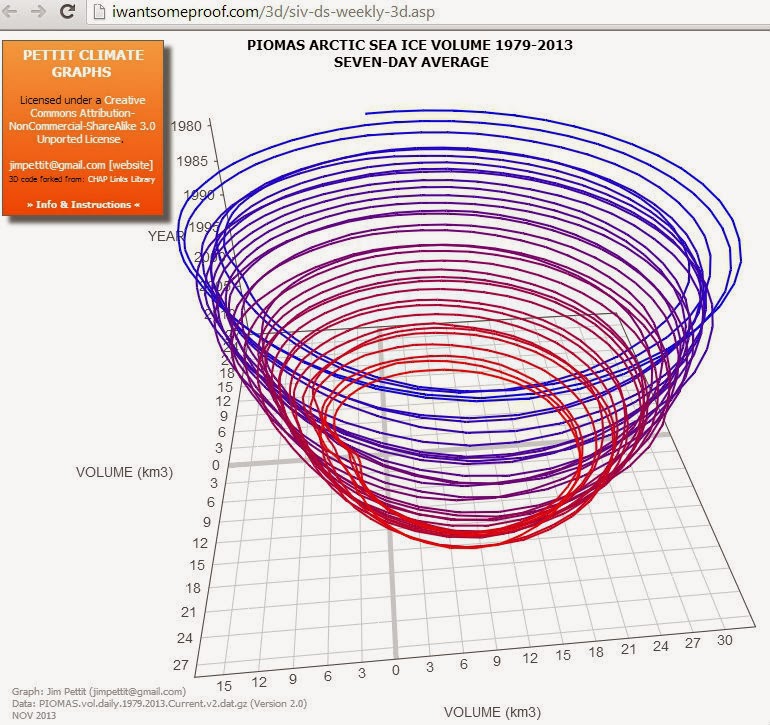 Thirteen feedbacks that can accelerate warming in the Arctic are depicted in the diagram below. 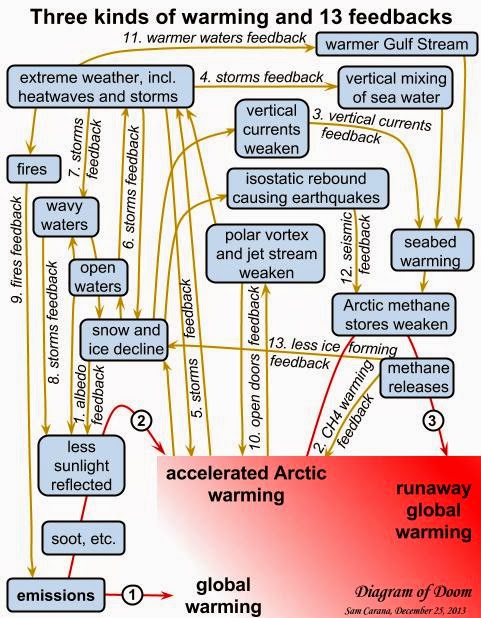 Specific feedbacks are described in the following posts:
- Diagram of Doom
- Further feedbacks of sea ice decline in the Arctic
- Causes of high methane levels over Arctic Ocean
- Methane Release caused by Earthquakes
- How Do We Act in the Face of Climate Chaos?
- The astounding global warming impact on our oceans . . .
- Methane emerges from warmer areas

Feedbacks are pictured in a more general way in the image below.


Above image shows how the accumulation of the many feedbacks and their interaction leads to ever stronger albedo changes, while the resulting accelerated warming in the Arctic causes increasing quantities of methane to be released from the seafloor of the Arctic Ocean, in turn leading to runaway global warming, as also pictured in the image below.

To reduce these risks, comprehensive and effective action is needed, such as described at the Climate Plan blog.