Methane concentrations in the Arctic are higher than elsewhere in the world, as shown on figure 1. below (NASA image). 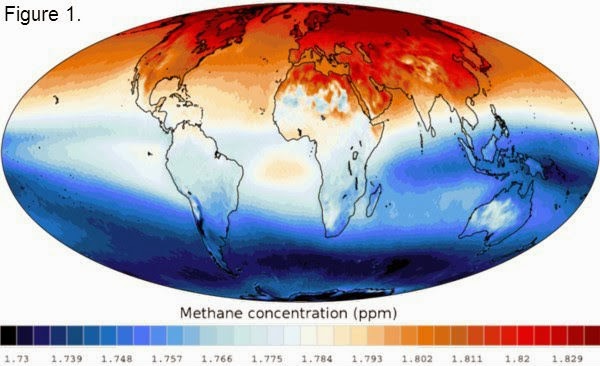 Methane is entering the atmosphere at high latitudes and spreading across the globe from there.

What is causing methane to be released in large quantities in the Arctic?

The Gulf Stream, pictured on figure 3. below, is warming up more than usual due to global warming. Specifically, pollution clouds pouring eastwards from the coast of Canada and the United States are the main culprit in heating up the Gulf Stream.

In July 2013, water off the coast of North America reached 'Record Warmest' temperatures and proceeded to travel along the Gulf Stream to the Arctic Ocean, where it is now warming up the seabed. Figure 4. below further shows that above-average temperatures were recorded in July 2013 along the entire path of the Gulf Stream into the Arctic Ocean.
The mean speed of the Gulf Stream is 4 miles per hour (6.4 km/hour or 1.78 metres/second), but the water slows down as it travels north. In the much wider North Atlantic Current, which is its north eastern extension, the current flows 3.5 times slower (about 0.51 metres/second), while the West Spitzbergen Current (WSC on figure 5. below) flows at about 0.35 metres/second (5 times slower). 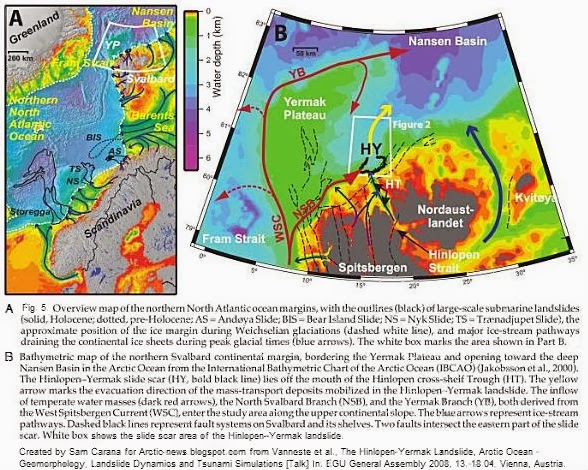 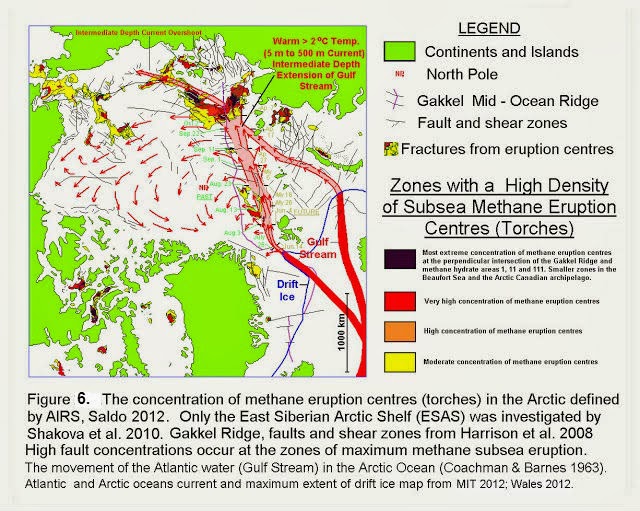 As above figure 7. shows, the total methane burden in the atmosphere now is 5 Gt. The 3 Gt that has been added since the 1750s accounts for almost half of all global warming. The amount of carbon stored in hydrates globally was in 1992 estimated to be 10,000 Gt (USGS), while a more recent estimate gives a figure of 63,400 Gt (Klauda & Sandler, 2005). The ESAS alone holds up to 1700 Gt of methane in the form of methane hydrates and free gas contained in sediments, of which 50 Gt is ready for abrupt release at any time, and Whiteman et al. calculate that an extra 50 Gt of methane would cause $60 trillion in damage. By comparison, the size of the world economy in 2012 was about $70 trillion.

Smaller releases of methane in the Arctic come with the same risk; their huge local warming impact threatens to further destabilize sediments under the Arctic Ocean and trigger further methane releases, as illustrated by figure 8. below.

Figure 9. below, from an earlier post by Malcolm Light, shows that, besides the shallow methane hydrate regions in the ESAS, the Arctic Ocean slope and deep water regions contain giant volumes of methane hydrate deposits (methane frozen within the ice). 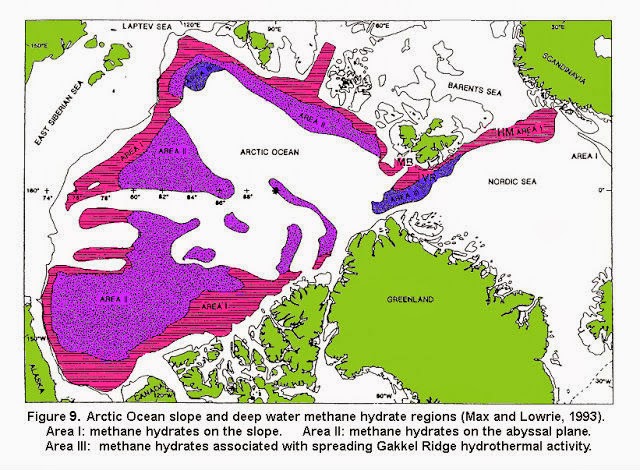 If only a few percent of this methane hydrate becomes destabilized, it will release enough methane into the atmosphere to cause a Permian Age-type massive extinction event. Recent methane emission maps show that, besides the emissions from the ESAS, huge amounts of methane are being released from other parts of the Arctic Ocean.

These hot clouds, resulting from many feedbacks including this Arctic atmospheric methane build-up, show that methane's delayed temperature anomaly of 20°C has already caught up in the Arctic and is going to progressively spread around the world resulting in runaway global warming.

Above figure 11. (by Sam Carana) and figure 12. below (by Malcolm Light) indicate that the critical mean atmospheric temperature anomaly of 8°C will be reached between 2035 and 2050. At this temperature we can expect total deglaciation and extinction, according IPCC AR4 (2007). 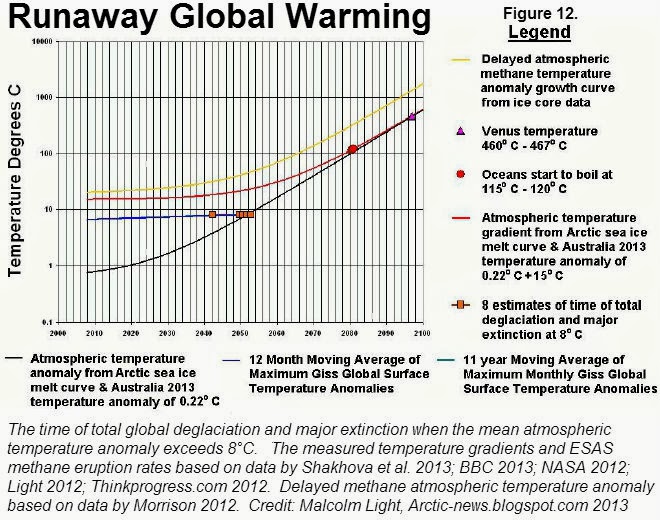 By 2012, the mean atmospheric temperature had increased by some 0.8°C by human induced global warming. This year however Australia has seen an anomalous 0.22°C temperature increase. The new Australian temperature gradient implies that in ten years the atmosphere will be 2.2°C hotter and in 30 to 40 years, 6.6 to 8.8°C hotter which is consistent with the Arctic methane emission temperature increase curves of Carana and Light.

The reason for this sudden temperature increase in Australia this year is due to the fast building pall of methane in the Northern Hemisphere caused by global warming and destabilization of the subsea Arctic methane hydrates and the Arctic surface methane hydrate permafrosts.

At the moment, the entire Arctic is covered by a widespread methane cloud, but it is very concentrated (> 1950 ppb) over the Eurasian Basin and Laptev Sea where the subsea methane hydrates are being destabilized at increasing rates by heated Atlantic (Gulf Stream) waters. The area of the Eurasian Basin is similar to that of the East Siberian Arctic Shelf (ESAS) where Shakova et al. (1999) have shown that some 50 billion tons of methane could be released at any moment during the next 50 years from destabilization of subsea ESAS methane hydrates.

At the moment, water saturated with methane is traveling underneath the ice carried by exit currents and emerging at locations where the sea ice is still less than one meter thick, such as in Baffin Bay and in Hudson Bay, as also shown on the animation below.

If we do not stop the massive increases of Arctic methane emissions into the atmosphere the oceans will begin to boil off by 2080, when the mean temperature anomaly exceeds 115 to 120°C and the temperatures will be like those on Venus by 2100 (see figure 12).

The present end of the financial crisis and recovery of the U.S. economy will take us down the same fossil fuel driven road to catastrophe that the U.S. has followed before, when they refused to sign the original Kyoto Protocols. Unless the United States and Canada reduce their extreme carbon footprints (per unit population), they will end up being found guilty of ecocide and genocide, as the number of countries destroyed by the catastrophic weather systems continues to increase.

The United States and Canada seek to expand their economies by increasingly frenetic extraction of fossil fuels, using the most environmentally destructive methods possible (fracking and shale oil), while the population's total addiction to inefficient gas transport is leading our planet into suicide. We are like maniacal lemmings leaping to their deaths over a global warming cliff. What a final and futile legacy it will be for the leader of the free world to be remembered only in the log of some passing alien ship recording the loss of the Earth’s atmosphere and hydrosphere after 2080 due to human greed and absolute energy ineptitude.

The U.S. Government and Canada must ban all environmentally destructive methods of fossil fuel extraction such as fracking, extracting shale oil and coal and widespread construction of the now found to be faulty hydrocarbon pipeline systems. All Federal Government subsidies to fossil fuel corporations, for fossil fuel discovery and extraction must be immediately eliminated and the money spent solely on renewable energy development, which will provide many jobs to the unemployed. All long and short range (high consumption) fossil fuel-powered transport must be electrified or converted to hydrogen and where the range is too large, electric vehicles (including electric trains and ships) must be used instead of fossil fuel-powered trucks or aviation means of transport. All the major work for this conversion (including railway construction) can provide a new and growing set of jobs for the unemployed. Nuclear power stations must continue to be used and should be converted to the safe thorium energy system until the transition is complete.

The U.S. has to put itself on a war footing, but rather than fighting other military forces, it should recall its military forces from various places across the world and set them to work on the massive shift to renewable energy that the country needs to undertake if it wishes to survive the fast approaching catastrophe. The threat now comes from Mother Nature, who has infinite power at her disposal and intends to take no prisoners when she will strike back hard over a very short, absolutely brutal, 30-to-40-year period which has already begun. I cannot emphasise more, how serious humanity’s predicament is and what we should try to do to prevent our certain final destruction and extinction in 30 to 40 years if we continue down the present path we are following.

In the ANGELS Proposal, subsea Arctic methane is extracted, stored and sold as LNG for distribution as fuel, to produce fertilizer, etc. Permanent storage underground, however, is more preferable.
As described by Sam Carana in an earlier post, Prof. Kenneth Yanda, at the University of California, Irvine, has shown that methane can be stored in propane - methane hydrates that are stable at temperatures of ca 15°C and low pressure (25 pounds per square inch - 1.66 atmospheres), very close to the ambient temperature and pressure conditions.

Hydrates can be produced that contain larger cages for other gases and smaller cages for methane.

Methane can be converted into propane and other gases with UV light and the final goal would be long-term storage of these gases in the form of hydrates in deep waters such as those north of Alaska, suggests Sam Carana, adding that carbon dioxide can also then be sequestered in the hydrates, after its removal from the atmosphere.

Unlike carbon dioxide, methane is completely non-polar and reacts very weakly with most materials.

These materials can help limit escape of fugutive gases from extraction, transport and distribution of methane.

The Lucy project seeks to decompose methane in the atmosphere.

In a new modified version of the Lucy Project, hydroxyls can also be generated by a polarized 13.56 MHZ beam intersecting the sea surface over the region where a massive methane torch (plume) is entering the atmosphere, so that the additional hydroxyl will react with the rising methane breaking a large part of it down. The polarized 13.56 MHZ radio waves will decompose atmospheric humidity, mist, fog, ocean spray, and the surface of the waves themselves in the Arctic Ocean into nascent hydrogen and hydroxyl (figure 18).

The newly determined atmospheric temperature gradient indicates that the mean global atmospheric temperature will reach 1.5°C in 15 years and 2°C in 20 years (Figure 14). Consequently we only have 15 years to get an efficient methane destruction radio - laser system designed, tested and installed (Lucy and Alamo (HAARP) Projects, figure 18) before the accelerating methane eruptions take us into uncontrollable runaway global warming. This will give a leeway of 5 years before the critical 2°C temperature anomaly will have been exceeded and we will be looking at catastrophic storm systems, a fast rate of sea level rise and coastal zone flooding with its extremely deleterious effects on world populations and global stability.