The Greenhouse Gases that human civilisation has emitted have warmed the Arctic more than any other area on Earth.

The reasons for this are well known and will not be repeated here. This has resulted in a loss of sea ice especially in the late summer. More recently still Methane has started to be released from Methane Hydrates especially from the East Siberian Arctic Shelf (ESAS). Emissions of Methane from this area increased from 8 to 17 Tg (teragrams or megaton) between 2009 and 2012 according to research done by Natalia Shakhova and in 2013 appear to be about 22 Tg.
See: arctic-news.blogspot.com/2013/11/quantifying-arctic-methane.html

My understanding is that the climate research organisations broadly accept that Methane emissions from the ESAS have risen substantially in the last few years, as indicated above, and are a serious concern, but they are still small compared to total global emissions of Methane and they do not accept that they will runaway in the near future. This needs examination. 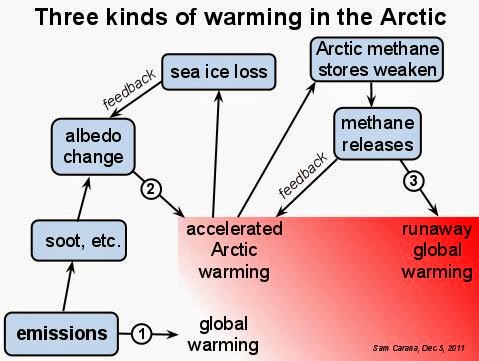 The warming of the Arctic seems likely to lead to the total melting of the Arctic Sea Ice in late summer no later than the summer of 2018 and to massive release of Methane from the melting of Methane Hydrates beneath the ESAS by the same date leading to runaway Global Warming and the end of most life on earth. In 2018, and probably before, the Arctic will be much warmer and the rate of Methane emissions by 2016 will cause alarm worldwide. In 2016 it will probably no longer be possible to prevent a runaway greenhouse event. The problem is that until after a runaway event has started, drastic climate impacts will not occur, so most people will not be alarmed by the situation. Nonetheless, immediate action is essential to cool the arctic.

The reason for this is that the ice is melting earlier in summer than has been the case for several millennia, because of Arctic Warming caused by the increased concentration of Greenhouse Gases in the atmosphere. Methane is still being released in relatively small quantities from Methane Hydrates beneath the ESAS now, but this will accelerate rapidly as Methane concentrations increase in the arctic atmosphere, since they will absorb more sunlight and warm the Arctic, causing further Methane releases.

Humanity may be able to prevent this from occurring, if drastic action is taken almost immediately, but if we don’t react then this will very rapidly become a runaway Greenhouse Event and out of our control. We must drastically reduce Greenhouse Gas emissions and take action to cool the arctic.

It is essential that your government responds to this emergency by publicising this worldwide and by trying to obtain a global agreement to drastically reduce global Greenhouse Gas emissions and to cool the Arctic.