The Paris Agreement called for a special report by the IPCC on the impacts of global warming of 1.5°C above pre-industrial levels and related global greenhouse gas emission pathways. In the report, the IPCC first defines pre-industrial as "the multi-century period prior to the onset of large-scale industrial activity around 1750". Yet, the IPCC then proceeds to use the period 1850-1900 to "approximate" pre-industrial. This raises the questions, has the IPCC been downplaying the temperature rise and is this continuing?

In 2020, the temperature anomaly on land was 1.58°C. In 1884, the temperature anomaly on land was -0.84°C. That's 2.42°C difference, for the anomaly from 1951-80, according to NASA data. The difference is even more pronounced when comparing the temperature rise over land (near surface) with the temperature rise of the water deeper in oceans.
As permafrost thaws and the snow and ice declines, huge amounts of energy are consumed in the process of melting. While the snow and ice cover has declined over time, it is still exercising this moderating effect today, be it that the speed at which this buffer is reducing in size is accelerating.

The temperature has risen accordingly since those times. In the year 1520, temperatures had risen by 0.29°C, compared to some 5000 years earlier. When also taking into account that the temperature would have fallen naturally (i.e. in the absence of these emissions), the early temperature rise caused by people may well be twice as much.
Calculating the total rise - 1920 to 2020
To calculate how much the temperature has risen since pre-industrial, let's start at 2020 and go back one century. The image below shows the rise between 1920 and 2020 compared to 1951-1980.
When changing the baseline to a decade centered around end 1920, the anomaly is 1.3°C. 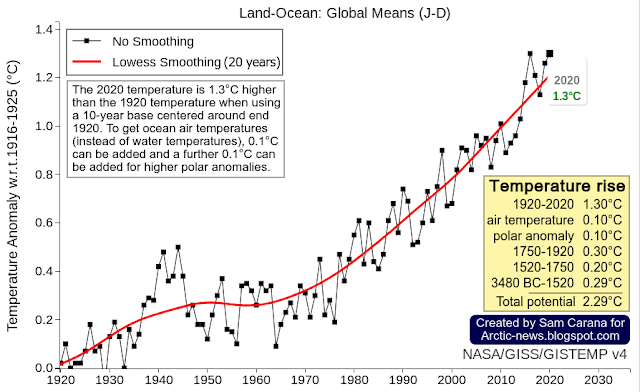 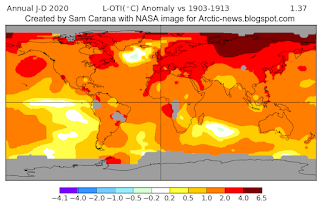 When using NASA data, starting from 2020, and looking back at the anomaly 100 years earlier, the above image show a difference of 1.30°C (see also debate and the image on the right which shows an even higher anomaly for a different baseline).
Compensating for missing data for polar anomalies
When going back to the early 1900s, there will be many areas for which data are missing, as indicated by the grey areas on the image on the right.
To assess the rise of Arctic temperatures over the years can be challenging. 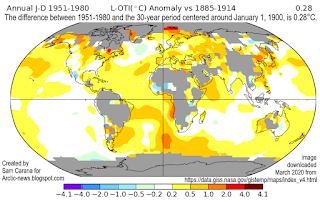 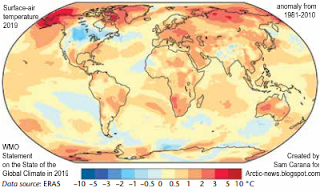 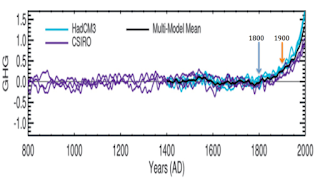 As discussed at the top, the rise from 3480 BC to 1520 is 0.29°C. The most significant marker in the pre-industrial period is the year 3480 BC, since emissions by people from that time have been higher than the amount to negate the natural trend for the temperature to fall. From 3480 BC, forcing by agriculture and deforestation due to activities by people was stronger than the natural fall in temperature that would have eventuated in the absence of such activities. This makes the year 3480 BC most significant as a climate marker, so it makes sense to regard this as the base year for pre-industrial.
Total rise from pre-industrial to 2020

Full impact of human emissions and the rise to come
This 2.29°C is the observed temperature rise from pre-industrial (∆O), i.e. when extending pre-industrial back to 3480 BC. This ∆O is only part of the full impact of human activities. Without emissions by humans, temperatures would have fallen since 3480 BC, and they would have kept falling in line with the natural fall in Summer insolation on the Northern Hemisphere. The heating needed to negate or overcome this natural fall from 3480 BC could be symbolized as ∆N. Accordingly, the full heating impact due to human emissions from pre-industrial is ∆E = ∆O + ∆N.
Part of global warming caused by people is currently masked (∆M) due to aerosols, mainly sulfates from burning of fossil fuel. There's no doubt that such emissions should be reduced, but the point is that the temperature rise looks set to increase substantially as this masking effect disappears. The unmasked rise (∆U) is the temperature rise that we face as the necessary transition to clean, renewable energy take place, and it is the sum of the observed rise and the rise that is currently masked, i.e. ∆U = ∆O + ∆M.
The temperature rise that occurs as sulfate cooling falls away is only part of the rise to come in the relatively near future (∆F). Black carbon aerosols have a net heating effect and they could increase as people start burning more wood and as forest fires increase. The impact of CO₂ emissions reaches its peak only a decade after emission. Some changes can over time become more manifest, such as decline of the snow and ice cover. There could be non-linear changes due to feedbacks that are only now starting to kick in. Each of these elements can contribute significantly to the future temperature rise (∆F). In other words, ∆O + ∆F may well exceed 3°C soon.
Conclusion

For thousands of years, people have been causing emissions that made the temperature rise. About 3480 BC, the forcing of these emissions became even stronger than the natural trend for temperatures to come down, in line with decreasing Summer insolation on the Northern Hemisphere. The term "natural" can be ambiguous, as forest fires and albedo changes are often regarded as "natural forcing", but of course the deliberate acts of peat burning and cutting down trees can hardly be regarded as 'natural'.