The top image, by the NASA Goddard Space Flight Center, shows the ice in September 2011, when coverage reached a historic low of 4.24 million square kilometers, as measured by the University of Bremen.

The event took place despite a period of remarkably low Sun activity coinciding with lower temperatures due to a La Niña period.

The graph on the right projects summer ice to melt entirely within years, as early as 2013, with a best guess of 2015. 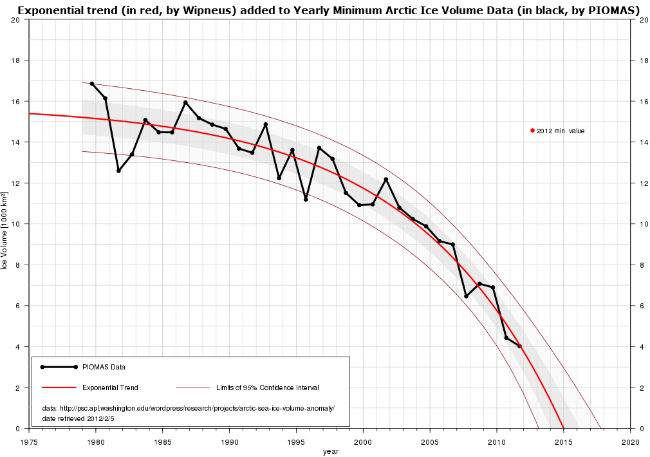 This is acknowledged by experts incl. Prof. Peter Wadhams, of Cambridge University, and Wieslaw Malowski, of American Naval Postgraduate School.

Ice loss means more sunlight gets absorbed in the sea, instead of being reflected back into space, as one out of several feedbacks accelerating warming in the Arctic.

Sam Carana points at three areas in the Arctic Ocean with profound temperature anomalies, the Beaufort Sea, the Laptev Sea and the Kara Sea (image left). This suggests that methane is being released into the atmosphere from submarine hydrates.

A 2008 paper by Shakova et al. considered release of up to 50 Pg of predicted amount hydrate storage as highly possible for abrupt release at any time. Combined amounts of methane from such hotspots of 15 Pg over a short period would result in an immediate burden of 20 Pg of methane (since there already is about 5 Pg in the atmosphere).

Applying methane’s immediate global warming potential of 120 times that of carbon dioxide would give this 20 Pg of methane an initial greenhouse effect equivalent to over 2400 Pg of carbon dioxide. By comparison, atmospheric carbon dioxide levels rose from 288 ppmv in 1850 to 369.5 ppmv in 2000, for an increase of 81.5 ppmv, or 174 PgC.

What makes things even worse is that this 174 PgC is a global figure, with its impact spread out over the globe, whereas methane from such abrupt releases in the Arctic would – at least initially – be concentrated in the relatively small areas of these hotpots, violently heating up the shallow waters in these areas with the risk of triggering further releases from methane hydrates.

In addition, large releases could cause hydroxyl depletion in the atmosphere, extending the lifetime of methane to decades.

In agreement on the seriousness of this threat, we urge you to tell your Parliamentary Representatives to act as outlined below:

Robert W. Howarth et al. and Drew Shindell use a GWP for methane of 105 for 20 years, and 33 for 100 years. That would imply an even higher immediate GWP than 105 over periods less than 20 years.

In its first five years, methane is at least 100 times as potent as carbon dioxide as a greenhouse gas (above image below, from a study by Dessus). Extending the above line would give an immediate GWP of about 120 times that of carbon dioxide.
A 2009 study by Drew Shindell found that increases in global methane emissions did cause a 26% hydroxyl decrease. Because of this, methane now persists longer in the atmosphere, before getting transformed into the less potent carbon dioxide.

A Centre for Atmospheric Science study suggests that sea ice loss may amplify permafrost warming, with an ice-free Arctic featuring a decrease in hydroxyl of up to 60% and an increase of tropospheric ozone (another greenhouse gas) of up to 60% over the Arctic. This lack of hydroxyl means that methane will persist in the atmosphere for longer at its high global warming potency.

Similarly, extension of methane’s lifetime further amplifies its greenhouse effect, especially for releases that are two or three times as large as current releases.

The image below is a screenshot from a study by T. Kurten et al. 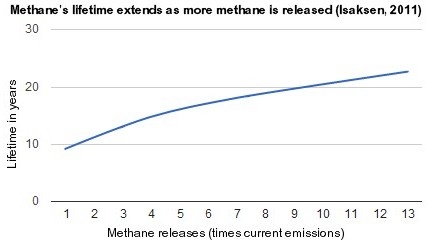 The graph on the right, based on data by Isaksen et al. (2011), shows how methane’s lifetime extends as more methane is released.

The GWP for methane typically includes indirect effects of tropospheric ozone production and stratospheric water vapor production. The study by Isaksen et al. shows (image below) that a scenario of 7 times current methane (image below, medium light colors) over 50 years would correspond with a radiative forcing of 3.6 W/m-2. 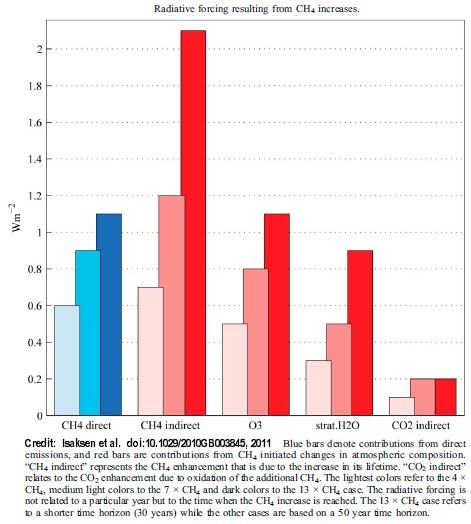 Such an increase in methane would thus add more than double the entire current net anthropogenic warming, effectively tripling the effect of all emissions added by people since the industrial revolution (for comparison, see Wikipedia image below). 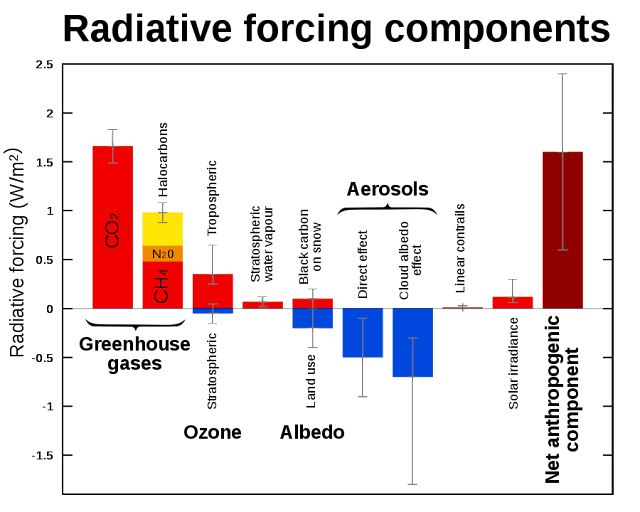 An addition of less than 30 Pg of methane would create such a scenario (i.e. of 7x the methane we’re used to having in the atmosphere) and this would extend methane’s lifetime to some 18 years, so such a burden will not go away quickly. The situation is even worse when releases take place abruptly over a short period. A single submarine landslide can release 5 Pg of methane, which can double the methane currently in the atmosphere when this occurs in shallow waters, since such a huge release will saturate the water, so most methane will enter the atmosphere unchanged, to trigger further releases.

This kind of warming in the Arctic could result in ever more methane ending up in the atmosphere and remaining there for a longer period without getting oxidized. Initially, all this methane will be concentrated in the arctic, causing huge amplification of the greenhouse effect there in summer, heating up the sea and causing further depletion of oxygen (as algae start to bloom) and further accelerating the permafrost melt and thus causing further carbon to be released from permafrost and clathrates.
Such dramatic local warming is bound to trigger further melting of permafrost locally, resulting in further releases of methane. Massive amounts of methane are stored in the Arctic, much of it concentrated at high density in hydrates. One liter of hydrate can release up to 164 liters of methane. A rise in temperature could cause abrupt releases of huge amounts of methane from hydrates.