Amplifying feedbacks leading to accelerated planetary temperatures
by Andrew Glikson
“The paleoclimate record shouts to us that, far from being self-stabilizing, the Earth's climate
system is an ornery beast which overreacts even to small nudges” (Wally Broecker) 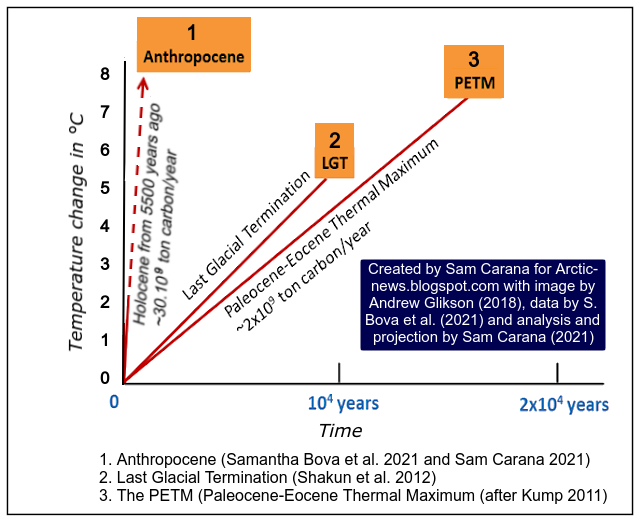 Many climate change models, including by the IPCC, appear to minimize or even neglect the amplifying feedbacks of global warming, which are pushing temperatures upward in a runaway chain reaction-like process, as projected by Wally Broecker and other:

These feedbacks drive a chain reaction of events, accelerating the warming, as follows:


The current acceleration of global warming is reflected by the anomalous rise of temperatures, in particular during 2010-2020 (Hansen 2021, Figure 1 above). Consequently, extensive regions are burning, with 4 to 5 million fires per year counted between about 2004 and 2019. In 2021, global April temperatures are much less than in 2020, due to a moderately strong La Nina effects.

A runaway climate chain reaction-like process triggered by release of methane is believed to have occurred during the Paleocene-Eocene thermal maximum (PETM), about 55 million years ago (Figures 2 above and 3A below).
Analogies between Anthropocene climate change and major geological climate events reveal the rate of current rise in greenhouse gas levels and temperatures as compared to major geological warming events is alarming. A commonly cited global warming event is the Paleocene-Eocene boundary thermal maximum (PETM) at 55 Ma-ago, reaching +5 degrees Celsius and over 800 ppm CO₂ within a few thousand years (Figures 2 above and 3A below).
The definitive measure of Anthropocene global warming, i.e. the rise in the atmospheric concentration of CO₂, to date by 49 percent since pre-industrial time (from 280 ppm to currently 419 ppm), is only rarely mentioned by the media or politicians. Nor are the levels of methane and nitrous oxide, which have risen by about 3-fold. To date potential attempts toward climate mitigation and adaptation have failed. There is a heavy price in communicating distressing projections, Cassandra-like, where climate scientists have been threatened, penalized or dismissed, including from major institutions.
The triggering of a mass extinction event by the activity of organisms is not unique to the Anthropocene. The end Permian mass extinction, the greatest calamity for life in geologic history, is marked in marine carbonates by a negative δ¹³C shift attributed to oceanic anoxia and the emission of methane (CH₄) and hydrogen sulphide (H₂S) related to the activity of methanogenic algae (“purple” and “green” bacteria) (Ward, 2006; Kump, 2011). As a corollary anthropogenic climate change constitutes a geological/biological process where the originating species (Homo sapiens) has not to date discovered an effective method of controlling the calamitous processes it has triggered.
A/Prof. Andrew Glikson