The Fatal Road To 4 Degrees Celsius

Global CO₂ rise and warming rates have reached a large factor to an order of magnitude higher than those of the past geological and mass extinction events, with major implications for the shift in climate zones and the nature and speed of current extreme weather events. Given the abrupt change in state of the atmosphere-ocean-cryosphere-land system, accelerating since the mid-20ᵗʰ century, the terms climate change and global warming no longer reflect the nature of the climate extremes consequent on this shift. Further to NASA’s reported mean land-ocean temperature rise to +1.18°C for March 2020, relative to the 1951-1980 baseline, large parts of the continents, including Siberia, central Asia, Canada, parts of west Africa, eastern South America and Australia are warming toward mean temperatures of +2°C and higher. The rate exceeds that of the Last Glacial Termination (LGT) (21–8 kyr), the Paleocene-Eocene hyperthermal event (PETM) (55.9 Ma) and the Cretaceous-Tertiary boundary (K-T) (64.98 Ma) impact event. A principal question arises regarding the relationships between the warming rate and the nature and progression of the current migration climate zones toward the poles, including changes in the atmosphere and ocean current systems. Significant transient cooling pauses, or stadials, are projected as a consequence of the flow of cold ice melt water from Greenland and Antarctica into the oceans. 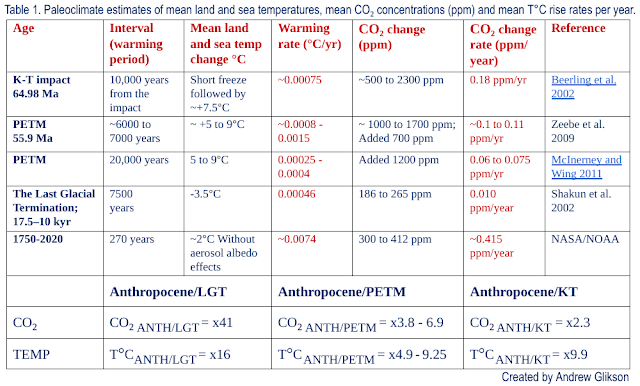 Beerling et al.’s (2002) estimate, based on fossil fern proxies, implies an initial injection of at least 6,400 GtCO₂  and possibly as high as 13,000 GtCO₂ into the atmosphere, significantly higher than values derived by Pope et al. (1997). This would increase climate forcing by +12 Wm⁻² and mean warming of ~7.5°C, which would have strongly stressed ecosystems already affected by cold temperatures and the blockage of sunlight during the impact winter and associated mass extinction at the KT boundary (O’Keefe et al. 1989).

The PETM hyperthermal event: The Palaeocene–Eocene Thermal Maximum, about 55.9 Ma, triggered the release of a large mass of light ¹³C-depleted carbon suggestive of an organic source, likely methane, has led to a global surface temperature rise of 5 – 9°C within a few thousand years (Table 1; Fig. 3). Deep-sea carbonate dissolution indices and stable carbon isotope composition were used to estimate the initial carbon pulse to a magnitude of 3,000 PgC or less. As a result, atmospheric carbon dioxide concentrations increased during the main event by up to 70% compared with pre-event levels, leading to a global surface temperatures rose by 5–9°C within a few thousand years.


The last glacial termination: Paleoclimate indices based on ice cores and isotopic evidence suggest temperature rise generally correlates with CO₂ during the Last Glacial Termination between 17.5 kyr to 10 kyr. Whereas the rise rates of CO₂ and temperature are broadly parallel the temperature somewhat lags behind CO₂ (Figure 2). Changes of CO₂ – 186 - 265 ppm and of temperature of T°C -3.3°C - +0.2°C (Fig. 4). A rise rate of ~0.010 ppm CO₂/year and of temperature ~0.00046°C/year are indicated (Table 1) (Shakun et al., 2012). Differences between temperature changes of the Northern Hemisphere and Southern Hemisphere correspond to variations in the strength of the Atlantic meridional overturning circulation.
Trajectories and rates of global CO₂ rise and warming

The rates at which atmospheric composition and climate changes occur constitute major control over the survival versus extinction of species. Based on paleo-proxy estimates of greenhouse gas levels and of mean temperatures, using oxygen and carbon isotopes, fossil plants, fossil organic matter, trace elements, the rate of CO₂ rise since ~1750 (Anthropocene) (CO₂ ᴀɴᴛʜ) exceeds that of the last glacial termination (CO₂ ʟɢᴛ) by an order of magnitude (CO₂ ᴀɴᴛʜ/CO₂ ʟɢᴛ = 41) and that of the Paleocene-Eocene Thermal Maximum (CO₂ ᴘᴇᴛᴍ) by a high factor (CO₂ ᴀɴᴛʜ/CO₂ ᴘᴇᴛᴍ ~ 3.8–6.9)(Table 1). The rise rate of mean global temperature exceeds that of the LGT and the PETM by a large factor to an order of magnitude (Table 1; Figs 5 and 6). It can be expected that such extreme rates of change will be manifest in real time by observed shifts in state of global and regional climates and the intensity and frequency of extreme weather events, including the following observations:
The rapid increase in extreme weather events,including droughts, heat waves, fires, cyclones and storms. 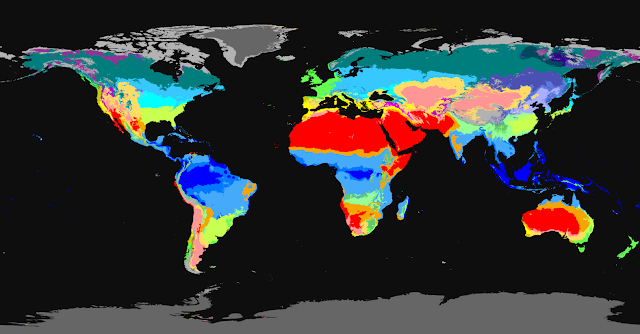 By contrast to linear IPCC climate projections for 2100-2300, climate modelling for the 21st century by Hansen et al. 2016 suggests major effects of ice melt water flow into the oceans from the ice sheets, leading to stadial cooling of parts of the oceans, changing the global temperature pattern from that of the early 21ˢᵗ century (Figs 8, 9a) to the late 21ˢᵗ century (Fig. 9b).