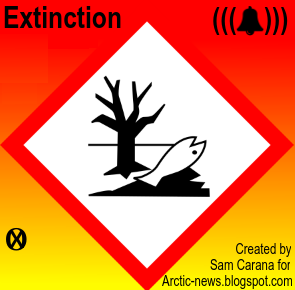 We will all be boiled alive like lobsters in a massively humid atmosphere and converted into stardust.

Using this data and the recent Piomas (2017) estimates of the minimum Arctic ice shelf volume it is now possible to estimate the timing of the Arctic - Permian style methane blowout firestorm more accurately and the events in the Figure 1. below and tabulated beneath it. 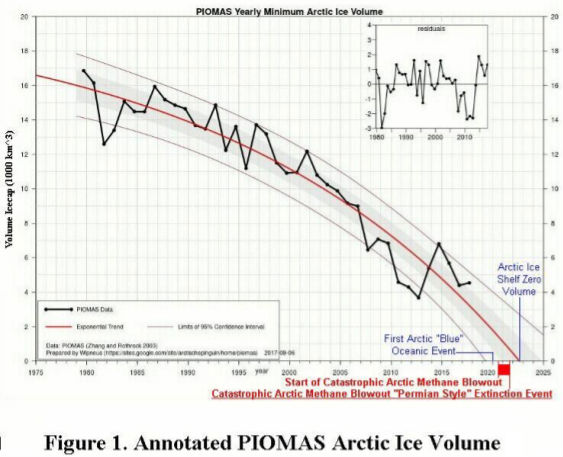 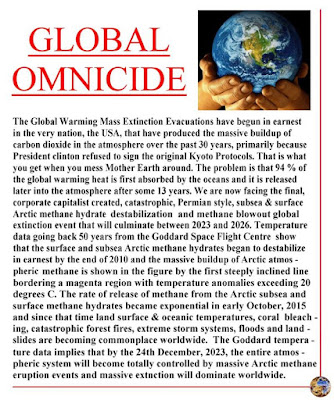 
2. The start of the Arctic Permian style methane blowout event can begin as early as July 15, 2020 at the end of Summer in the Northern Hemisphere if the Mean Yearly Global Warming Potential of Methane is used (119.3959 from Goddard Space Flight Centre Data, NASA 2012)


3. The Major Arctic Permian Style, Methane Blowout - Firestorm Event which will cause the release of some 50 Gt of methane from the Arctic shelf and slope (Shakhova, 2010), a 10 Degree Centigrade Rise in Mean Global Atmospheric Temperatures causing a Catastrophic Permian Style Global Extinction Event, is timed to begin on 4th September, 2021 using an Atmospheric Methane Global Warming Potential of 100. This is an end Summer event for the Northern Hemisphere. 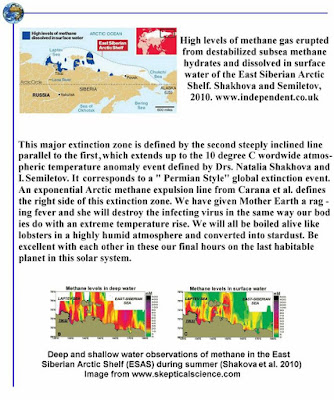 4. There is a 95% Probability that the Arctic Ice Shelf will have Zero Volume by the 5th of September 2022 (Piomass - Zhang and Rothrock, 2003, Wipneus, 2017, Carana, 2016) which is an end Summer event and exactly one year after the Catastrophic Permian Style Global Extinction Event.

This indicates a total 12 month delay in the atmospheric heat being transferred to the tropical ocean currents (e.g the Gulf Stream) and then being conducted north to heat up the Svalbard current which then destabilizes the shelf and slope methane hydrates in the Arctic ocean releasing methane to the atmosphere.

The Goddard Space flight Centre Arctic shelf data (NASA 2012) indicate a 7 month delay in Summer ocean heating and the release of methane from the Arctic shelf and slope.

The Arctic ice shelf is being melted from below so the ocean needs to be heated first by the methane in the tropical stratosphere and this heat is then transferred by ocean current to the Arctic over at least 7 months. Ice also has a large latent heat of melting adding an additional several months to the delay time for the total Arctic ice shelf melt.


5. From the 24ᵗʰ of December 2022, Worldwide Catastrophic Weather Systems are now entirely controlled by the Arctic Atmospheric Global Warming Veil. The data is derived from the converging amplitude envelope of the 11 year moving average of the GISS maximum surface temperature anomalies from which the final mean convergence point being was determined (NASA GISS Data). 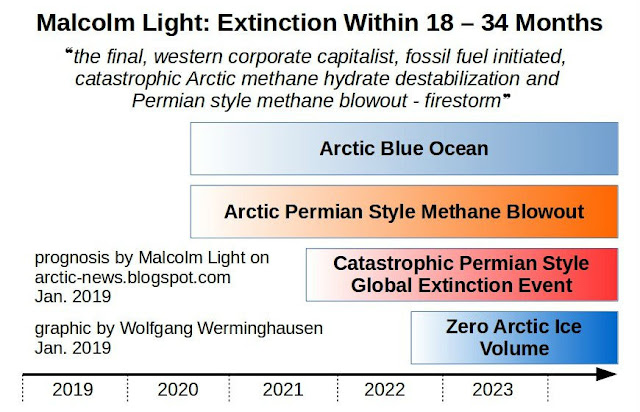 WHAT YOU NEED TO DO

Do not worry about dying as it comes to all of us in the end, only this time we will all be going together. The Earth will soon after this lose all its oceans and become "Venus Like".

Empathy is organic evolution's key to group survival in a uncaring inorganic universe. Enjoy yourselves and be excellent to each other in these last days and hours on the only remaining habitable planet in this solar system.

The Earth is a giant convecting planet, the underlying molten magma being heated by deep seated radioactivity and the oceans and atmosphere are its cooling radiator which allows the Earth the facility to vent this heat into open space (Windley, 1984; Allen and Allen, 1990). Mother Earth has carefully held the atmospheric temperature within a stable range necessary for oceans to exist for at least 4 billion years and nurtured the earliest bacteria to evolve into today's space faring humans (Calder, 1983).

The fouling up of the Earth's cooling radiator from Human emissions of greenhouse gases derived from fossil fuels will be counteracted by Mother Earth in her characteristic fashion by emitting vast volumes of deadly methane into the atmosphere from the Arctic regions. This will lead to the total extermination of all harmful biological species that produce greenhouse gases in the same way that Mother Earth did during the Permian and other extinction extinction events. In this case however we have totally tipped the balance with our extreme carbon dioxide and methane emissions so that there will be no chance of recovery for the Earth in this time frame, because the methane release will cause the oceans to begin boiling off between 115°C and 120°C (Severson, 2013) in 2080 and the Earth's atmosphere will have reached temperatures equivalent to those on Venus by 2096 (460°C to 467°C)(Wales, 2013; Moon Phases, 2013).

Mankind's greed for fossil fuels will have completely destroyed a magnificent beautiful blue planet and converted its atmosphere into a barren, stiflingly hot, carbon dioxide rich haze. The earth will have moved permanently out of the magical zone (Circumstellar habitable zone, Goldilocks zone) where life (some of it probably highly intelligent) also exists elsewhere in the myriad of other solar systems that are located within the far reaches of our Universe.

The power, prestige and massive economy of the United States has been built on cheap and abundant fossil fuels and Canada is now trying to do the same. The present end of the financial crisis and recovery of the U.S. economy will take us down the same fossil fuel driven road to catastrophe that the U.S. has followed before. Unless the United States, Canada reduce their extreme carbon footprints (per unit population), they will end up being found guilty of ecocide and genocide as the number of countries destroyed by the catastrophic weather systems continues to increase.

The United States and Canada with their expanding economies and their growing frenetic extraction of fossil fuels, using the most environmentally destructive methods possible (fracking and shale oil) as well as the population's total addiction to inefficient gas transport is leading our planet into suicide. We are like maniacal lemmings leaping to their deaths over a global warming cliff. What a final and futile legacy it will be for the leader of the free world to be remembered only in the log of some passing alien ship recording the loss of the Earth’s atmosphere and hydrosphere after 2080 due to human greed and absolute energy ineptitude.

The U.S. Government and Canada must ban all environmentally destructive methods of fossil fuel extraction such as fracking, extracting shale oil and coal and widespread construction of the now found to be faulty hydrocarbon pipeline systems. All Federal Government subsidies to fossil fuel corporations, for fossil fuel discovery and extraction must be immediately eliminated and the money spent solely on renewable energy development which will provide many jobs to the unemployed. All long and short range (high consumption) fossil fuel transport must be electrified and where the range is too large, electrical trains must be used instead of trucks for transport. All the major work for this conversion and railway construction can provide a new and growing set of jobs for the unemployed. Nuclear power stations must continue to be used and should be converted to the safe thorium energy system until the transition is complete.

The U.S. has to put itself on a war footing, recall its entire military forces and set them to work on the massive change over to renewable energy that the country needs to undertake, if it wishes to survive the fast approaching catastrophe. The enemy now is Mother Nature who has infinite power at her disposal and intends to take no prisoners in this very short, absolutely brutal, 30 to 40 year war she has begun. I cannot emphasise more, how serious humanity’s predicament is and what we should try to do to prevent our certain final destruction and extinction in the next 30 to 40 years if we continue down the present path we are following .


The above message was posted by Malcolm Light on January 7, 2019, with minor updates later in January 2019, and with Conclusions added from this post.

• One Step to Accept our Short Term Extinction, by Wolfgang Werminghausen
https://www.fasterthanexpected.one/one-step-to-accept-our-short-term-extinction


In the video below, recorded January 5, 2019, Guy McPherson talks with Jamen Shively and Michael about extinction.

Malcolm may be being too conservative. The Arctic has spat out the freshwater lid that allows sea ice to exist, and this may all kick off in September this year.

Biggest near term danger is to coastal communities, should the Greenland and/or Antarctic Ice sheets cascade collapse. They are poised to do this and it could produce worldwide megatsunami and 30m sea level rise in months of fast paced action. Good news is that flooding the north Atlantic and Arctic with huge icebergs of ice sheet origin should plug the methane dyke and stop the oceans being boiled. If we have enough tech capacity as after the cataclysm we can easily steer away from that cliff in the century or two grace a dryas event will afford us.

Get inland, and on high ground now! Unless you'd rather drown.