North Pole forecast to be above freezing on Feb 5, 2018

The image below shows a forecast of above freezing temperatures over the North Pole on Feb 5, 2018. 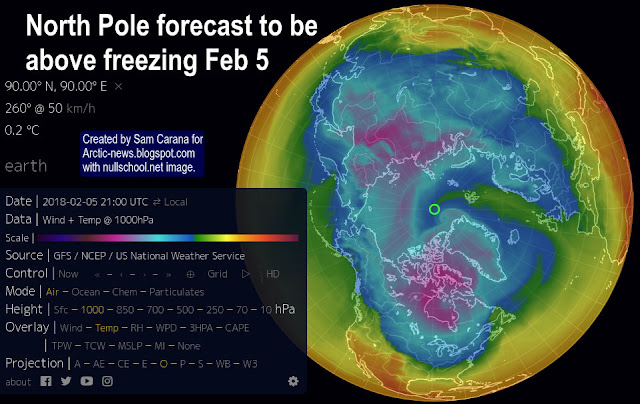 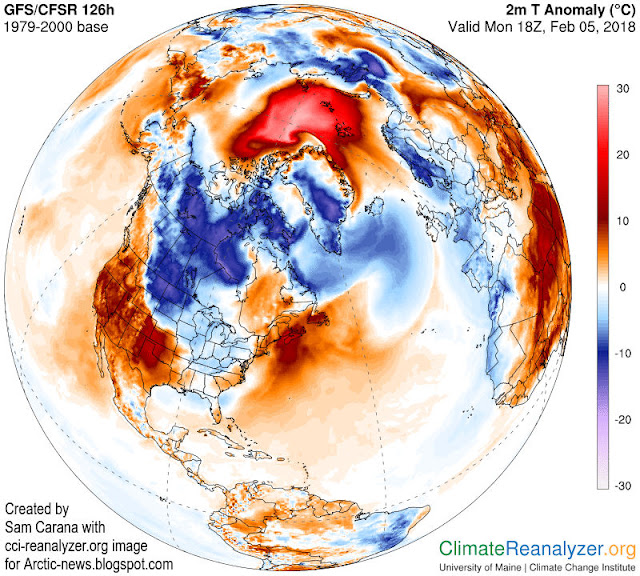 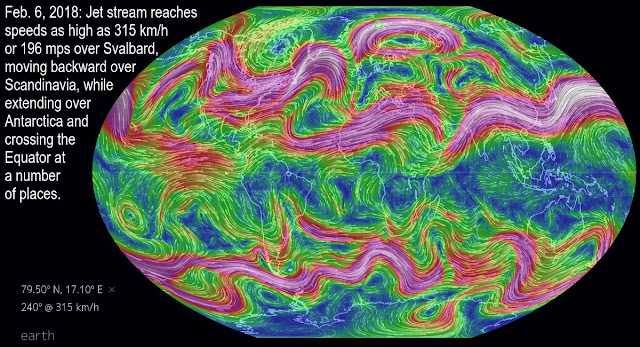 These high temperatures are caused not only by ocean heat, but also by strong winds pushing warm air and water up from the North Atlantic into the Arctic. Above image shows the Jet Stream moving at speeds as high as 315 km/h or 196 mph (green circle, February 6, 2018, 6:00 UTC), moving in backward direction over Scandinavia, while extending over Antarctica and crossing the Equator at a number of places. 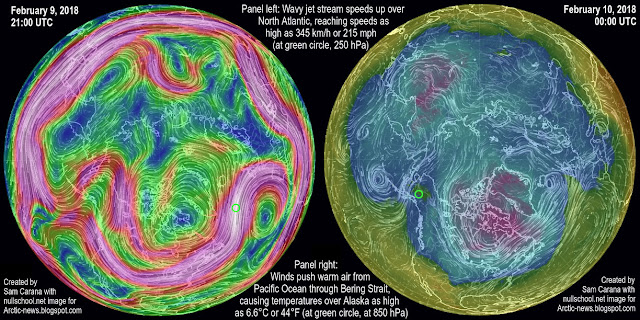 The decreasing temperature difference between the North Pole and the Equator is slowing down the speed at which the jet stream circumnavigates Earth and this is also making the jet stream more wavy.

In above image, the left panel shows a wavy jet stream speeding up over the North Atlantic, reaching speeds as high as 345 km/h or 215 mph (at green circle, 250 hPa).

In above image, the right panel shows strong winds pushing warm air from the Pacific Ocean through Bering Strait, resulting in temperatures over Alaska as high as 6.6°C or 44°F (at green circle, at 850 hPa).

The image on the right shows that waves as high as 8.27 m or 27.2 ft (at green circle) are forecast to enter the Arctic Ocean near Svalbard on February 5, 2018, giving an indication of the huge amount of energy that is going into oceans. 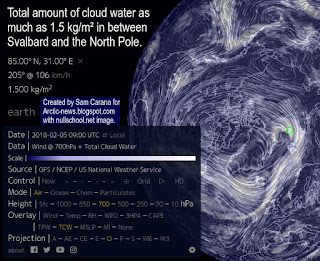 Earth is retaining more heat. This translates into higher surface temperatures, more heat getting stored in oceans and stronger winds. This in turn is causing higher waves and more evaporation from the sea surface. The image on the right shows a forecast of total amount of cloud water (in air from surface to space) of 1.5 kg/m² (green circle) in between Svalbard and the North Pole on February 5, 2018.

Warm air, warm water and high waves make it hard for sea ice to form, while evaporation from the ocean adds more water vapor to the atmosphere. Since water vapor is a potent greenhouse gas, this further accelerates warming of the Arctic. 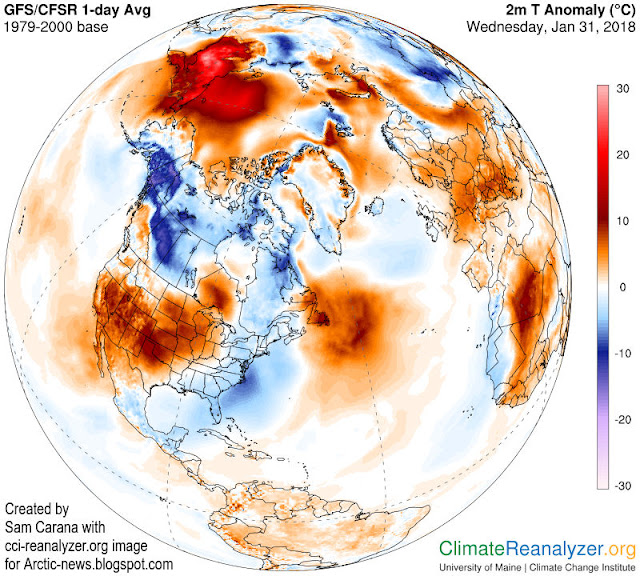 Above image shows average temperature anomalies for January 31, 2018, compared to 1979-2000. The image below shows open water on the East Siberian coast in the Arctic Ocean that day. 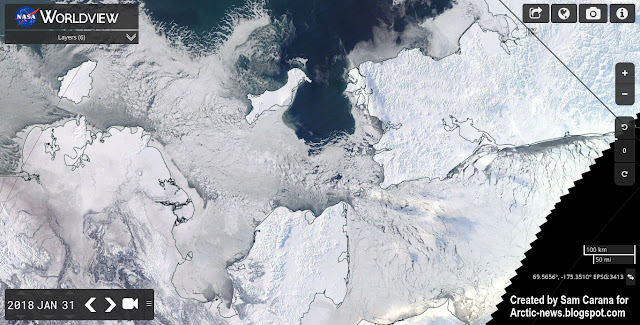 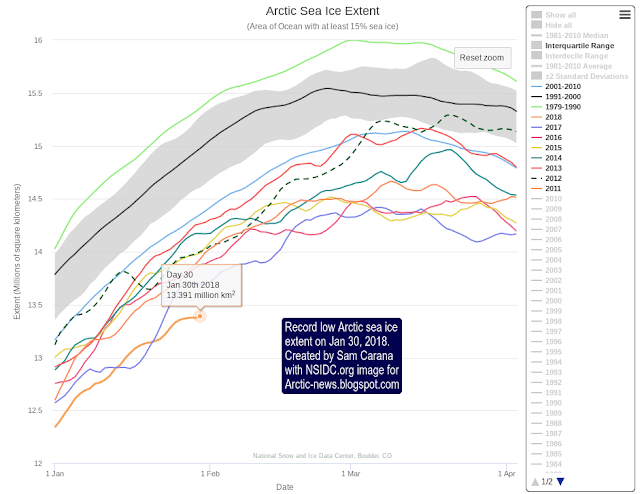 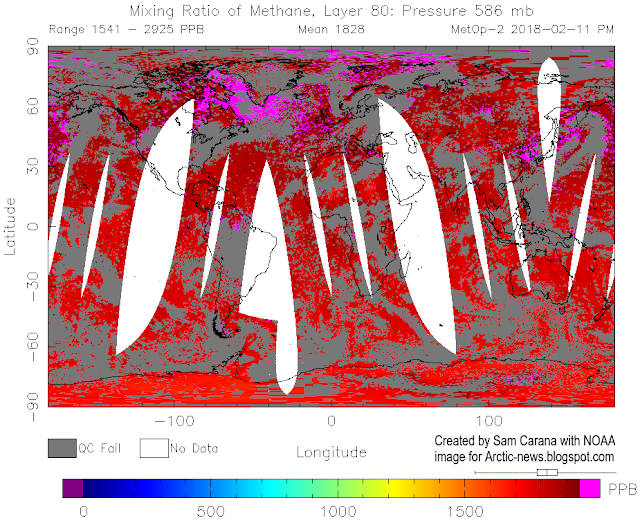 High methane peaks are becoming more common as the water temperature of oceans keeps rising, which also goes hand in hand with more water vapor and less sea ice. As said, these are all warming elements that amplify each other in many ways. 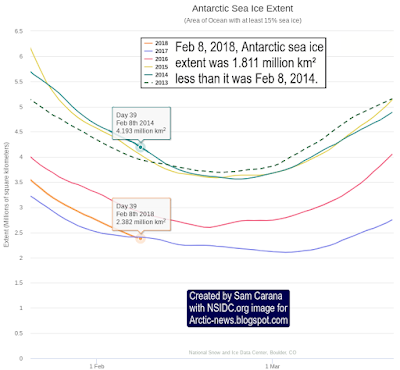 The image on the right illustrates the huge loss of sea ice around Antarctica over the past few years. Antarctic sea ice looks set to reach an all-time low extent later this month, with a difference of close to 2 million km² persisting, compared to just a few years ago.

The image below shows a forecast for February 5, 2018, with as much as 3.84 kg/m² (green circle) Total Cloud Water in between South Africa and Antarctica. 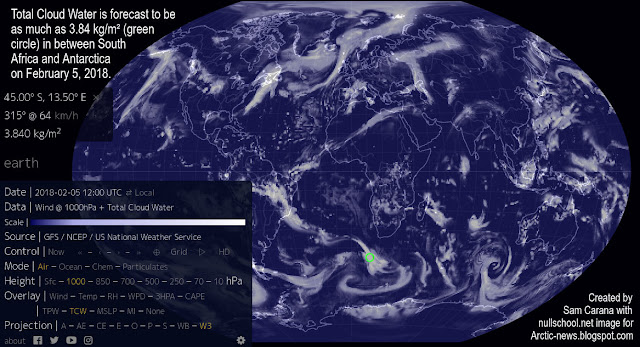 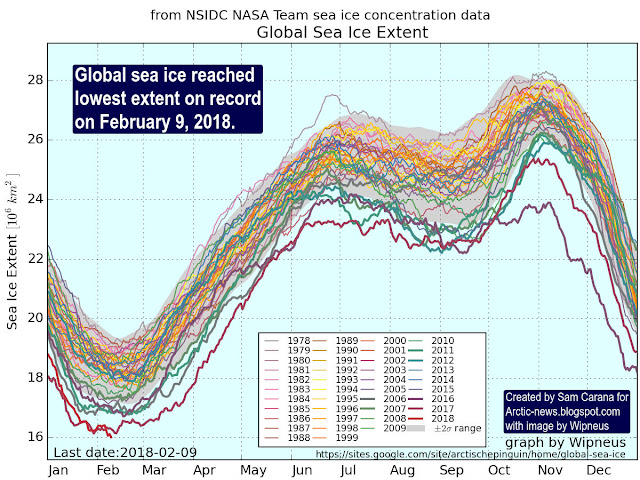 This means that a huge amount of sunlight that was previously reflected back into space is now instead getting absorbed by oceans.