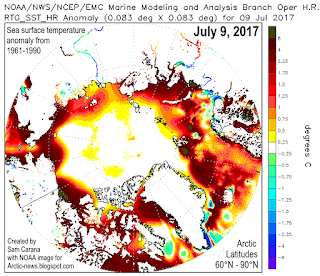 It's raining over the Arctic Ocean and the rain is devastating the sea ice. What are the conditions that led to this?

As has been known for a long time, energy is added to Earth due to emissions by people and this translates into a warmer troposphere with more water vapor, warmer oceans and stronger winds.

Warming is hitting the Arctic particularly hard, due to numerous feedbacks, as illustrated by the sea surface temperature anomalies image on the right.

On July 6, 2017, cyclonic winds lined up to create a 'perfect storm'. As a result, an Atmospheric River of moisture was driven through Bering Strait into the Arctic Ocean, as shown on the images below. 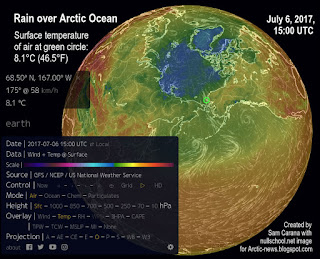 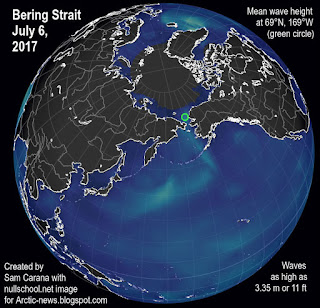 Another indication of the strength of the wind driven through Bering Strait is wave height. On July 6, 2017, waves were as high as 3.35 m or 11 ft in the Bering Strait, at the location marked by the green circle on the image on the right.

The relatively warm and moist air driven through Bering Strait by strong winds is causing rain to fall over the sea ice of the Arctic Ocean, as shown on the video and images further below.

On July 7, 2017, high air temperatures were recorded over land and over the water.

The image below shows temperatures recorded at two locations over the Mackenzie River, one of 32.6°C or 90.8°F at the mouth of the Mackenzie River and another one of 34.7°C or 94.5°F further inland. Warm water from rivers can substantially warm up the sea surface and thus melt the sea ice.

Temperature of the surface of the water was 10°C or 50.1°F where the water was pushed into the Bering Strait, while temperatures as high as 46.9°C or 116.3°F were recorded over California. 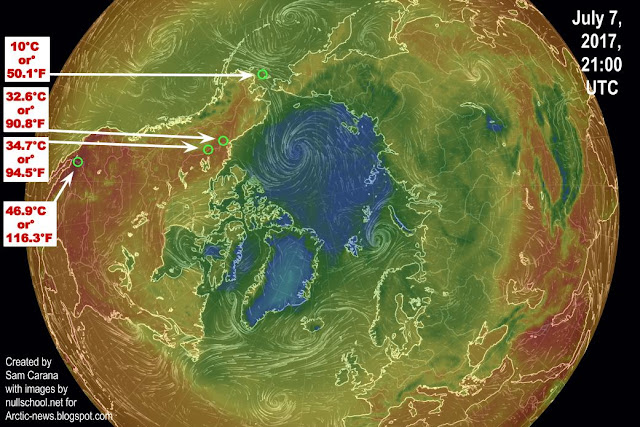 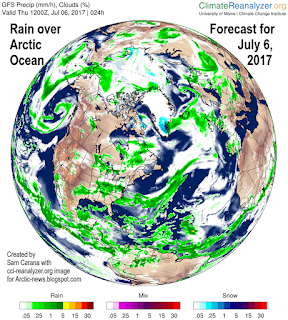 Rain can be particularly devastating. The very force at which rain strikes can fracture the sea ice where it's weak, while pools of rainwater and meltwater will form at places where the sea ice is stronger. Where fractures appear in the sea ice, warm water can reach further parts of the ice and widen the cracks.

Arctic sea ice is in a terrible shape. Sea ice volume is at a record low, as indicated by the Wipneus image below showing volume anomalies from 2002. 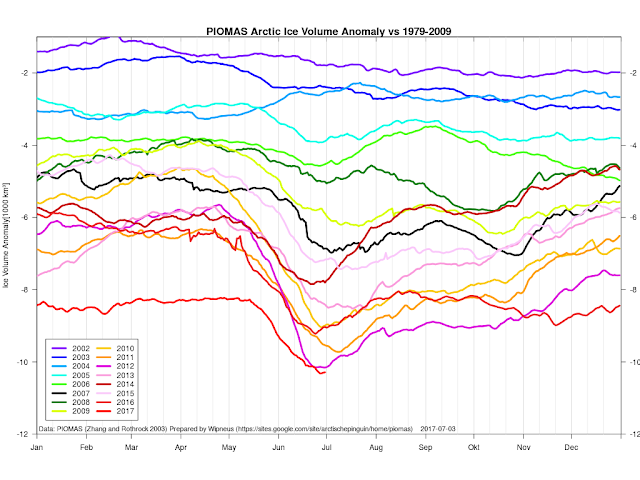 The image below, by Torstein Viddal, shows how low the 2017 year-to-date average sea ice volume is. 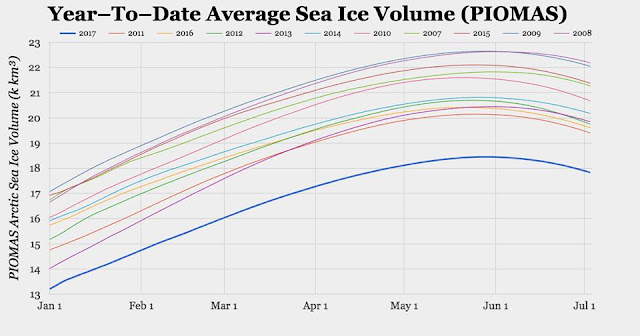 An additional danger is wildfires. Due to high temperatures, wildfires have broken out near the Mackenzie River, as illustrated by the satellite image below. 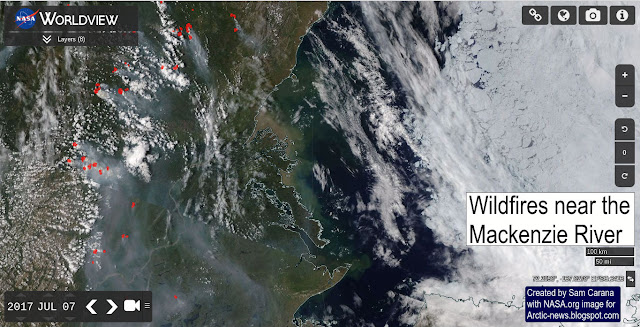 Wildfires come with a lot of emissions, including soot that darkens the surface when settling down, thus further speeding up warming.