The image below illustrates the intensity of the heatwave over western Europe, with temperatures forecast to keep hitting the top end of the scale for days to come.

Global warming is strengthening heatwaves. The Arctic is warming faster than the rest of the world, so the temperature difference between the North Pole and the Equator is getting smaller. It is this temperature difference that powers the jet stream. The result is that the speed at which the jet stream circumnavigates the globe is falling. Furthermore, the path of the jet stream is changing, sometimes extending far to the north, then deeper to the south, just like a river will meander more where the land is flatter. 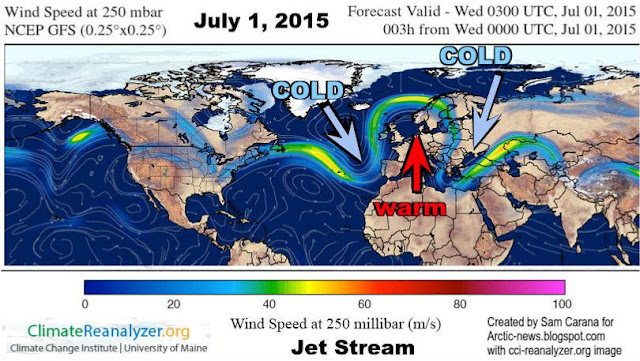 Above image illustrates that these changes to the jet stream make that warm air from the south can more easily move up north, to higher latitudes, while cold air from the Arctic can more easily move down to lower latitudes, in both cases further decreasing the temperature difference between the North Pole and the Equator, which makes these changes to the jet stream a self-reinforcing feedback loop that is rapidly making the situation worse.

While such developments have been documented for years, e.g. see this feedbacks page, the media rarely inform people about them. And while the media do cover the suffering caused by the heatwaves that have been hitting populous countries such as India, Pakistan, the U.S., Spain and France recently, less attention is given to heatwaves hitting the Arctic.

High temperatures close to the Arctic Ocean are very worrying, for a number of reasons, including:

The video below was created by Stuart Thrupp from a NASA animation showing carbon monoxide from Alaska wildfires spreading over the Arctic from June 17th to 29th, 2015.

Short movie of carbon-monoxide levels over Alaska. June 17th- June 29th. Thanks for NASA Eyes on earth for there animation.
Posted by Stuart Thrupp on Wednesday, July 1, 2015

The heatwaves that hit Alaska and Russia recently are now followed up by a heatwave in East Siberia.

The image below shows a location well inside the Arctic Circle where temperatures as high as 37.1°C (98.78°F) were recorded on July 2, 2015. The top panel shows temperatures, while the bottom panel also shows the depth of the Arctic Ocean and the location of the Gakkel Ridge, in between the northern tip of Greenland and the Laptev Sea. As the image below shows, the jet stream is forecast to move up high into the Arctic north of Siberia over the next few days. The image shows the jet stream as at July 8, 2015.

The image below shows a forecast of temperature anomalies for July 7, 2015.

The four images below illustrate how the heatwave is forecast to develop over the next few days (hat tip to Mark Richardson).


The image on the right, also created with a Climate Reanalyzer image, shows rain over the Arctic, over the East Siberian Sea and over an area close to the North Pole.

Rain over sea ice will create melt ponds with associated loss in albedo (reflectivity), making that light that was previously reflected back into space by the sea ice will instead be absorbed by the water, further speeding up the demise of the sea ice.

The picture below was taken July 2, 2015, by WebCam#1, mounted on a satellite-reporting buoy. The camera provides a wide-angle 120° horizontal field of view and was installed in April 2015, about 1.5 m above the ice surface, at a location some 25 miles from the North Pole. The buoy has meanwhile drifted some distance away from the North Pole, see map at this page.

The presence of water can indicate that the sea ice has completely disappeared in the respective area, which could in turn be caused by sea ice melting and/or bubbling up of methane, so it's important to keep monitoring this. More likely though, the water is probably surface water on top of the ice, caused by melting and/or rain. Anyway, water reflects less sunlight back into space than sea ice, so the result will be that more sunlight is instead absorbed by the water and/or the sea ice.

With temperatures as high as the 37.1°C (98.78°F) recorded on July 2, 2016 (image further above), huge melting can be expected where there still is sea ice in the waters off the coast of Siberia, while the waters where the sea ice has already gone will warm up rapidly.

Note that the waters off the coast of Siberia are less than 50 m (164 ft) deep, so warming can quickly extend all the way down to the seabed, that can contain enormous amounts of methane in the form of free gas and hydrates.

While the media gives wide coverage to the heatwaves that have been hitting populous countries such as India, Pakistan,...
Posted by Sam Carana on Thursday, July 2, 2015