Following heat waves in Alaska and the north of Canada, the Arctic looks set to be hit by heat waves along the north coast of Russia in early June, 2015. The image below shows temperature anomalies at the top end of the scale for a large area of Russia forecast for June 6, 2015. 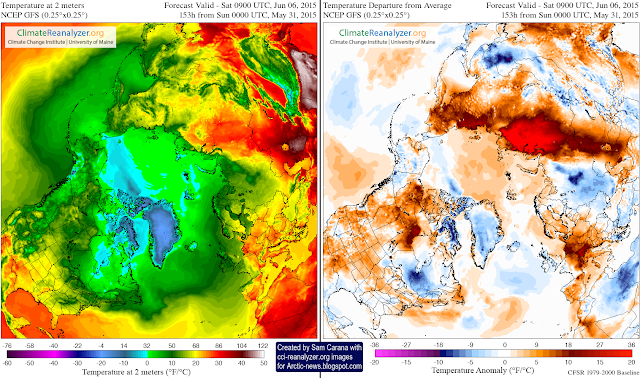 The image below shows a forecast for June 6, 2015, with high temperatures highlighted at four locations (green circles). 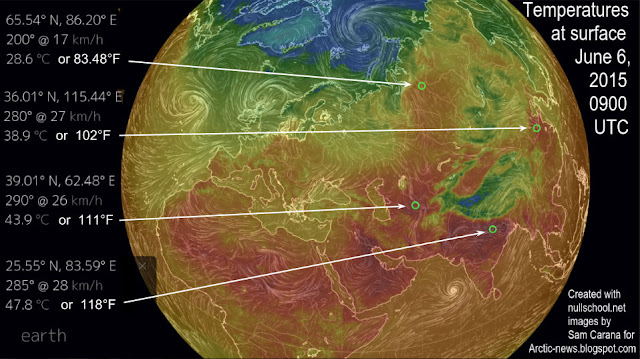 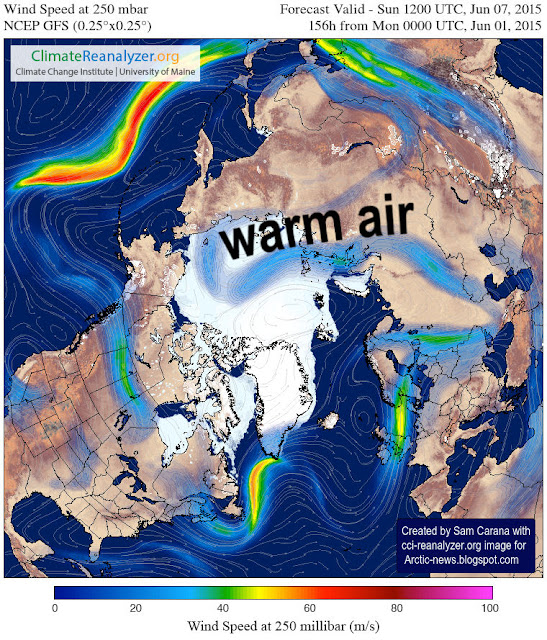 The animation below runs the time of the top image (June 6, 2015, 0900 UTC) to the above image (June 7, 2015, 1200 UTC), showing forecasts of the jet stream moving over the Arctic Ocean, with its meandering shape holding warm air that extends from Russia deep into the Arctic Ocean.

Below is another view of the situation.
Clicking on this link will bring you to an animated version that also shows the wind direction, highlighting the speed (I clocked winds of up to 148 km/h, or 92 mph) of the jet stream as it moves warm air from Russia into the Arctic Ocean, sped up by cyclonic wind around Svalbard.

Furthermore, such high temperatures set the scene for wildfires that can emit huge amounts of pollutants, among which dust and black carbon that, when settling on the sea ice, can cause large albedo falls.

The image below shows Russian rivers that end up in the Arctic Ocean, while the image also shows sea surface temperature anomalies as high as 8.2°C or 14.76°F (at the green circle, near Svalbard). 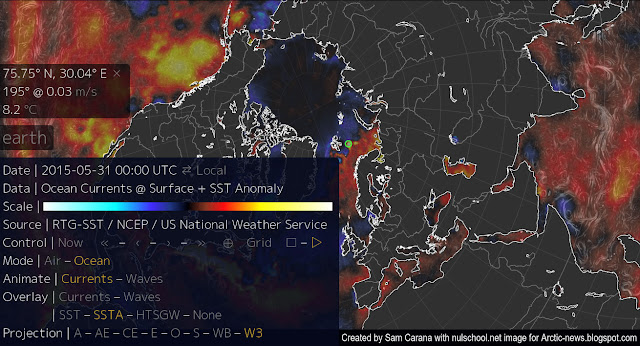 The big danger is that the combined impact of these feedbacks will accelerate warming in the Arctic to a point where huge amounts of methane will erupt abruptly from the seafloor of the Arctic Ocean.
The image below shows that methane levels as high as 2,566 ppb were recorded on May 31, 2015, while high methane levels are visible over the East Siberian Arctic Shelf. 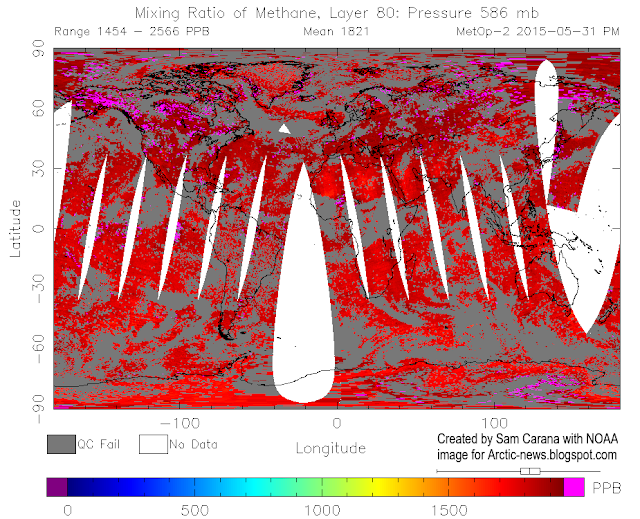 Below is part of a comment on the situation by Albert Kallio:


As the soils warm up the bacteria in them and the insulating capacities of snow themselves tend to lead snow cover melting faster the warmer the soil it rests on becomes. (Thus the falling snow melts very rapidly on British soil surface if compared to Finland or Siberia where the underlying ground is much colder, even if occasionally the summers have similar or even higher temperatures).

The large snow cover over the mid latitude land masses is a strong negative feedback for the heat intake from the sun if the season 2015 is compared with the season 2012, but the massive sea ice and polar air mass out-transportation equally strongly weakens formation of new sea ice around the North Pole (and along the edges of the Arctic Ocean) as the air above the Arctic Ocean remains warm. The pile up of thin coastal ice also increases vertical upturning of sea water and this could have detrimental effects for the frozen seabed that is storing methane clathrates. The sunlight intake of the sea areas where sea ice has already disappeared corresponds largely with the 2012 season.

The inevitable snow melting around the Arctic Ocean will also transport record volumes of warmed melt water from the south to the Arctic Ocean. The available heat in the Arctic may also be later enhanced by the high sea water temperatures that prevail along the eastern and western coasts of North America, as well as El Nino event increasing temporarily air and sea surface temperatures. This leads to more depressions around Japan and Korea from where the warm air, storms and rains migrate towards Alaska and pull cold air away from Arctic over Russia, while pushing warm air through the Baring Strait area and Alaska to the Arctic Ocean region.

Forecasting seasonal out comes is likely to be increasingly difficult to make due to increasing number of variables in the seasonal melting processes and the resulting lack of historic precedents when the oceans and Arctic has been as warm as today. Thus the interplay of the opposing forces makes increasingly chaotic outcomes, in which the overall trend will always be for less ice and snow at the end of the season. Because of these reasons - including many others not explicitly mentioned here - the overall outcome for the blue ocean, or the ice-free Arctic Ocean, will be inevitable.

Whether the loss of sea ice happens this summer, or next, or one after that, the problem isn't going to go away and more needs to be done to geoengineer to save Arctic ice and wildlife dependent on summer sea ice.


Albert Kallio is absolutely right in saying that warmer temperatures are leading to a blue ocean event though the problem remains in which year this will happen. Additionally Methane is being released from the bottom of the ocean leading to increased Methane concentrations and all that means for a destabilising global climate. Frustratingly, the higher temperatures and increasing Methane concentrations are not yet quite sufficient for us to persuade the scientific community and the public that Armageddon is on the way. Hence it is not yet possible to be in a position to persuade the world community of the urgent need for Geo-engineering to save the Arctic and Global climate. However we may reach this situation in the near future and that will be the only time when it might be possible to save the global climate and prevent Armageddon.


The situation is dire and calls for comprehensive and effective action, as discussed at the Climate Plan page.


This image shows Russian rivers that end up in the Arctic Ocean, while it also shows sea surface temperature anomalies...
Posted by Sam Carana on Monday, June 1, 2015