The very least 'global warming' could do for us is to give us warmer winters, right? Wrong, writes Nick Breeze, who met climate scientist and meteorologist Jennifer Francis in his attempt to understand the complex interactions of jet stream, polar vortex, the melting Arctic, and the extreme snowfall that's hitting the northeast US right now.

"Historic" snowfalls have the US northeast this week, with Buffalo, New York under an astonishing 2.4m (8ft) of snow - enough to cause some roofs to cave in under the pressure.

It's just the latest chapter in 2014 unprecedented range of weather extremes - from persistent storms that battered, and flooded much of the UK at the beginning of the year, before going on to record the hottest October since records began.

And in the US, extremes have ranged from California's record drought, to the early snows now under way in the northeast - and let's not forget the 'polar vortex' that hit much of the US in January, bringing Arctic conditions as far south as Texas and Florida, causing flights to be cancelled in Chicago as aviation fuel froze in the -38.3C (-37F) temperatures. 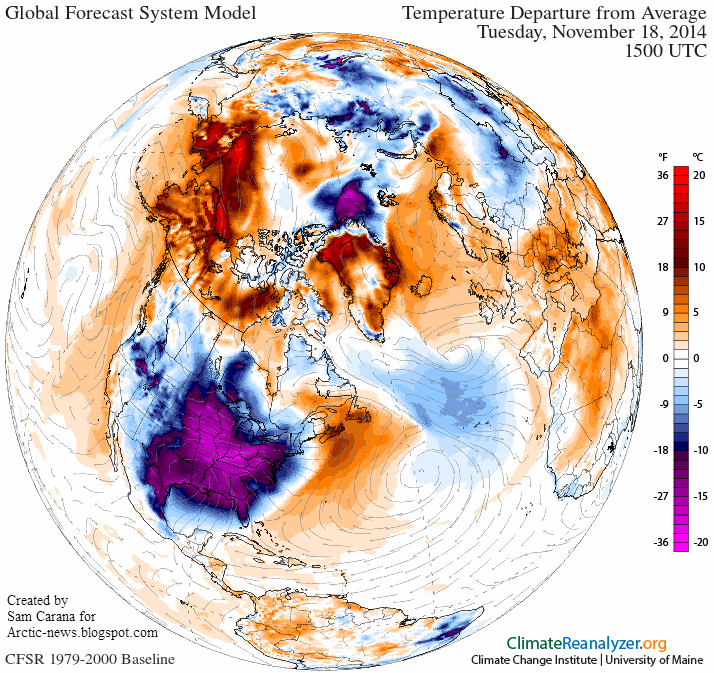 Scientists now have evidence that these persistent extreme weather patterns are increasing in their frequency, due to the rapid heating up of the Arctic that is changing the behaviour of the jet stream, and in turn, the polar vortex.

And Jennifer Francis of Rutgers University, one of the leading US scientists studying the relationship between Arctic warming and changes in the jet stream, believes that it's thanks to 'global warming' that northern hemisphere weather is becoming more extreme - and it's not about to get any better.


The 'vast river of wind' that makes our weather

"The Arctic is generally very cold", she told me, "and the areas farther south are warm, and that difference in temperature between those two areas is really what fuels that vast river of wind moving high over our head that we call the jet stream."

"The jet stream in turn creates most of the weather that we feel all around the northern hemisphere and the middle latitudes, so anything that affects this jet stream is going to affect weather patterns. So as the Arctic warms up much faster than the areas farther south, we're seeing this temperature difference between these two regions get smaller."

The result of that, she explains, is that the atmospheric forces driving the jet stream's circular motion are getting smaller - and that means the winds themselves in the jet stream are getting weaker, and moving more slowly.

"When that happens, the jet stream tends to take a wavier path as it travels around the northern hemisphere and those waves are actually what create the stormy patterns and the nice weather patterns. As those waves get larger because of this weakening of those winds of the jet stream, they tend to move more slowly from west to east."

"Drought and agriculture is a big problem. Storminess in certain areas is another big problem. Yes, it has a huge impact for a whole range of issues that affect the way we live."

It's no wonder then that Dr Francis and her colleagues have attracted the attention of President Obama's chief science advisor, Dr John Holdren.

Dr Holdren has been reporting directly to the President on the real time effects of climate change and is keen to understand what this new research tells us about the future impact of changes to the jet stream.

Asked about this sudden interest in her work from the US Presidency, Francis muses thoughtfully. "Yes, we've had a lot of interest from policy makers", she acknowledges.

"I think we're starting to make a lot of progress now in getting policymakers to understand that this is a big problem they have to face ... I think decision makers and the policymakers at the local level get it much better because they're already seeing effects on their local areas.

"Sea level rise is an obvious one. They're already seeing changes in drought and agricultural problems and dealing with fresh water issues. It is really at the local level that we're having more success."

So to understand the changes in the jet stream it's important to research how the vast atmospheric river of weather above our heads is connected to other climate mechanisms.

"It appears that over the north Atlantic, and towards Asia, there's a mechanism that appears to be quite robust, and several groups have found this mechanism using completely different analysis techniques", says Francis referring to new research by colleagues at the University of Alaska that has emerged in the last couple of months.

"So what we're finding is that there's an area, north of Scandinavia in the Arctic, where the ice has been disappearing particularly rapidly. When that ice disappears ... there is unfrozen ocean underneath, and that ocean absorbs a lot more energy from the sun through the summertime. So it becomes very warm there."

"Then as the fall comes around, all that heat that's been absorbed all summer long, where the ice has retreated, is put back in the atmosphere and that creates a big bubble of hot air ... over that region where the ice was lost."

And in turn, that goes on to disrupt the circumpolar winds whose behaviour determines much the weather across the northern hemisphere.

"So what we're getting is this big northward bulge up over Scandinavia and a southward dip over Asia ... creating, first the tendency for a larger wave in the jet stream, which tends to move more slowly, but also we're seeing this mechanism that creates these colder winters that have been observed over Central Asia."

"So as that wave energy gets sent up from this larger wave below, up into the stratosphere, it breaks down that polar vortex so that it becomes wavier as well. That wavier polar vortex sends energy back down to the lower atmosphere and it creates an even wavier jet stream in February."

"So we're seeing this connection of mechanisms that starts with Arctic sea ice loss and it makes a wavier jet stream for different reasons all the way through winter."

Will the jet stream continue to cause changes in climate?

By identifying these mechanisms and linking them back directly to loss of the Arctic sea ice, Dr Francis and her colleagues are demonstrating how man-made global warming is creating feedbacks that are changing the climate conditions in the northern hemisphere - and not for the better.

It may be counterintuitive, and it when it first happened it took scientists by surprise - but now it looks like this is one of the most important ways in which 'global warming' is hitting North America. Melting ice in the Arctic Ocean is indirectly pushing frigid Arctic air south across the continent, creating the perfect conditions for massive snowfall.

Which is all very well ... but what's coming next? "We are using these climate models, or computer simulations ... to try and project what we're expecting to see happen in the future, as greenhouse gases continue to increase.

"The early indications are that these large wavy patterns in the jet stream are going to become more frequent in the future, as far as we can tell. It is preliminary research that I haven't published yet but it does look as if they are going to increase."


Nick Breeze is a film maker and writer on climate change and other environmental topics. He has been interviewing a range of experts relating to the field of climate change and science for over four years. These include interviews with Dr James Hansen, Professor Martin Rees, Professor James Lovelock, Dr Rowan Williams, Dr Natalia Shakhova, Dr Michael Mann, Dr Hugh Hunt, among others.

Additional articles can also be read on his blog Envisionation.

Jennifer Francis is a research professor at the Institute of Marine and Coastal Sciences at Rutgers University, where she studies Arctic climate change and the link between Arctic and global climates. She has authored more than 40 peer-reviewed publications on these topics. She was also the co-founder of the Rutgers Climate and Environmental Change Initiative.