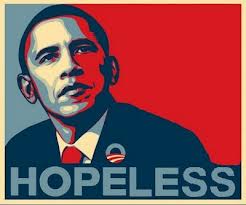 The Obama plan is a phony fossil fuel PR plan to keep increasing American fossil fuel production, which, under Obama, has reached an all-time high. We have to get atmospheric CO2 down below 350ppm fast – with a planetary emergency climate action plan. Today it is 400ppm. Under the Obama plan, it will only keep going up fast.

It is easy to rate a climate plan, but it seems America doesn’t know the climate science basics. Basic climate science fact number one is “zero carbon” (see onlyzerocarbon.org). If we don’t stop emitting carbon, we can’t stop, or even slow down, global warming.

It is definite that the global temperature and ocean acidification cannot stop increasing unless industrial carbon emissions get to zero. You probably haven’t heard this fact because it means the end of the fossil fuel industry.

US Fossil Fuel Production under Obama 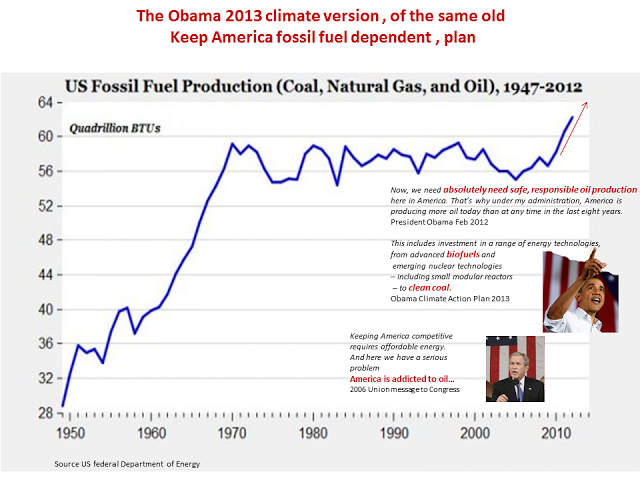 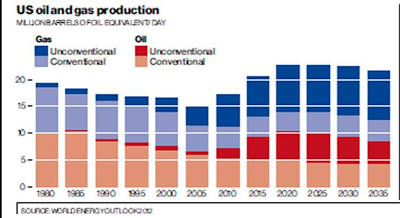 Below from: US to become world leader in oil and gas thanks to fracking — The UK Independent, 13 November 2012.

The United States will leapfrog Saudi Arabia and Russia to become the world’s biggest producer of oil and gas in the next five years as the controversial practice of ‘fracking’ for hydrocarbons contained in shale rocks has enabled the country to increase production massively.

US oil and gas production is set to leap by about a quarter by 2020 as the rapid growth of hydraulic fracturing, or fracking, propels the country towards providing all its own energy by 2035, according to the World Energy Outlook report from the International Energy Agency.

The fracking boom will push US oil production up from 8.1 million barrels a day last year to 11.1 million in 2020 while gas extraction will jump from 604 billion cubic metres a day to 747 billion (International Energy Agency).

Maria van der Hoeven, the IEA executive director, said: “North America is at the forefront of a sweeping transformation in oil and gas production that will affect all regions of the world.”

Below from: US may soon become world’s top oil producer — Associated Press, 19 February 2013.

Driven by high prices and new drilling methods, U.S. production of crude and other liquid hydrocarbons is on track to rise 7 percent this year to an average of 10.9 million barrels per day. This will be the fourth straight year of crude increases and the biggest single-year gain since 1951.

Obama is getting away with planetary-scale climate change murder. His actions as the most influential leader on the planet will affect the entire planet forever.

Obama is proud of his record American oil production: “Now, we absolutely need safe, responsible oil production here in America. That’s why under my administration, America is producing more oil today than at any time in the last eight years.” (February 2012)

With atmospheric carbon at the highest level it’s been in 15 million years and ocean acidification occurring faster than in the past 300 million years, there’s no such thing as safe oil production any more.

Check the Obama climate action plan for any evidence of a decrease in fossil fuel production any time in the future. It is all continued increase, and it is locking America and the world into another 50 years of fossil fuel energy dependency. Only by then, civilization will have collapsed.

Unlocking Long-Term Investment in Clean Energy Innovation.
The Fiscal Year 2014 Budget continues the President’s commitment to keeping the United States at the forefront of clean energy research, development, and deployment.  … This includes investment in a range of energy technologies, from advanced biofuels and emerging nuclear technologies – including small modular reactors – to clean coal.
Spurring Investment in Advanced Fossil Energy Projects: In the coming weeks, the Department of Energy will issue a Federal Register Notice announcing a draft of a solicitation that would make up to $8 billion in (self-pay) loan guarantee authority available for a wide array of advanced fossil energy projects under its Section 1703 loan guarantee program.

Clean Coal? Only the coal industry talks the “clean coal” oxymoron, which makes Obama a coal man in the White House, as well as an oil man. There is no such thing as clean coal or oil, and, in any case, the cleanest fossil fuels would be far from zero-carbon.

Biofuels? Burning food is an obvious obscenity. Burning biofuels emits CO2 and incurs a carbon debt from the land being used to produce biofuels – it is nowhere near a zero-carbon energy.

Where is the long-term investment in real, clean, zero-carbon, everlasting energy? Yet this is a fossil-fuel-promoting climate action plan.

All this money is being used as fossil-fuel cover-up, to deceive Americans into thinking there is such a thing as “clean coal” and “ethical oil.” All government money should be going to true clean, zero-carbon energy development if we are to survive. Obama has no intention of replacing or displacing fossil fuel energy from its longstanding energy dominance.

This climate “action” plan is designed to maintain American and world fossil fuel dominance of the energy market. Now that Obama has got US fossil fuel production up to all time record levels, he placates his environmental supporters with the clean-fossil-fuel energy big lie, and they fall for it. It is, of course, too good to be true.

The US oil and gas fracking technology has fast become the end-of-the-world model for the rest of the world to follow. So much for President Obama and the great climate change hope for greenhouse-gas-polluting energy change.

When President Obama talks about American leadership, he means leadership in shale oil, shale gas and methane hydrate gas. He is leading America and the world to Climate Hell.

Peter Carter is a retired family MD. Peter has spent many years working with environmental health development policy.
Peter has been a blogger since 2008. You can reach him at Uprage, the Climate Emergency Institute and on Facebook.
“I now focus on global climate change, because if we fail to fix this, we fail on everything,” says Peter.