A new group, named 1250, calls for governments around the world to take action on methane.

Just like 350 parts per million has become a popular target for carbon dioxide, the group similarly advocates a target for methane, aiming for a reduction of methane to 1250 parts per billion (ppb).

On several occasions in April, 2013, the hourly average carbon dioxide concentration in the atmosphere of Mouna Loa, Hawaii, surpassed 400 parts per million (ppm). On May 9, 2013, the daily mean concentration of carbon dioxide in the atmosphere of Mauna Loa also surpassed 400 ppm. The National Oceanic and Atmospheric Administration (NOAA) comments that before the Industrial Revolution in the 19th century, global average carbon dioxide was about 280 ppm. During the last 800,000 years, carbon dioxide fluctuated between about 180 ppm during ice ages and 280 ppm during interglacial warm periods. Today’s rate of increase is more than 100 times faster than the increase that occurred when the last ice age ended.

On May 9, 2013, at another place on Earth, another significant event took place. Methane levels above Antarctica reached a peak of 2249 ppb, highlighting the need for action on methane.

The group 1250 advocates a similar target for methane, i.e. a reduction of methane to 1250 parts per billion.

“Methane is far more potent than carbon dioxide as a greenhouse gas, making it important to reduce levels of methane in the atmosphere,” explains founder Nathan Currier; “1250 is not just an advocacy group for methane cuts, however. Rather, it is a group focusing on near-term climate as a whole, and on practical pathways to constructing a ‘climate bridge’ towards a stable and sustainable future.”

The launch of the group is accompanied by the release of the chart below showing the very high methane levels that have been recorded over Antarctica recently. The chart was prepared by Sam Carana, who also is a founding member of 1250. 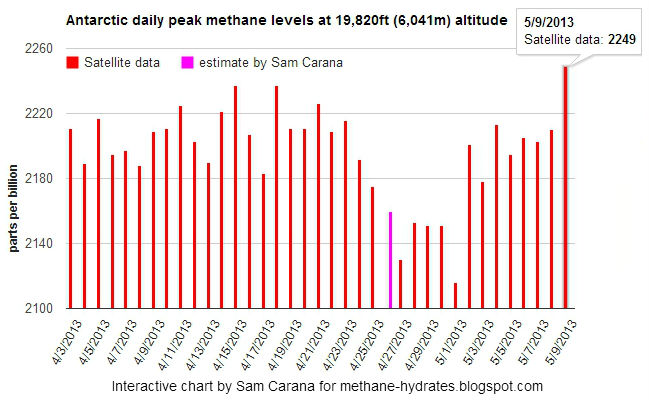 These very high methane emissions occur on the heights of East Antarctica. Antarctica is covered in a thick layer of ice. It appears that these very high emissions are caused by methane from hydrates that is escaping in the form of free gas bubbling up through the ice sheet.

The danger is that such emissions will escalate, not only over Antarctica, but also on the Qinghai-Tibet Plateau and in the Arctic. For more on this, see the methane-hydrates blog.

The group 1250 was set up specifically to address to need for a comprehensive approach to the challenges posed by climate change. The group now invites other groups to a dialogue regarding the details.